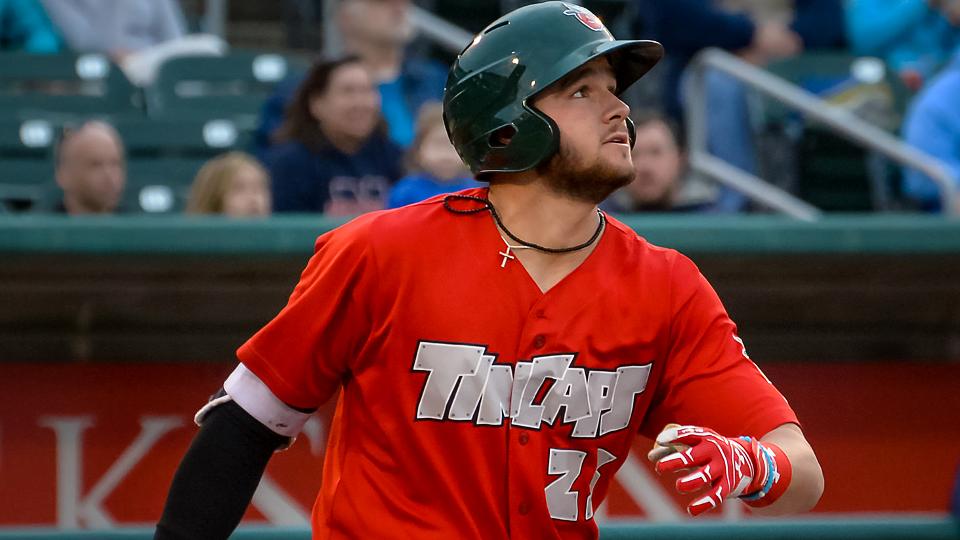 Austin Allen is hitting .509 with a homer and 14 RBIs in 16 games this season. (Kyle Castle/Lansing Lugnuts)

Austin Allen ran to the dugout after taking infield with the Fort Wayne TinCaps on a blustery April day, wearing his San Diego Padres-issued workout shorts and top, unfazed by weather that still had the phrase "wind-chill factor" attached to it.

Allen, a 6-foot-4, left-handed-hitting catcher, has defied the frigid weather so far. Through 16 games, Allen led all of Minor League Baseball with a .509 batting average. It's a continuation of the way the towering catcher finished off the Northwest League season at Tri-City, where he went from hitting .196 on July 26 to finish his first pro season at .240.

"That's a great feeling to get off to that kind of start," said former Major Leaguer Moises Alou, who is a special assistant for player development in the Padres organization.

"One thing I always wanted to do when I played was to get off to a good start," Alou said. "If you start good, you build confidence, and it keeps going throughout the season. That's better than starting slow and having to make up ground. That's when young players start trying to do too much, and then get into trouble. Confidence is the best thing you can have in life, whether you are a professional baseball player, or an engineer. Once you have confidence, it's so much easier for you to perform."

Allen entered pro ball with a reputation as a hitter. The 2015 fourth-round pick hit .421 with 11 homers in 49 games his junior season at Florida Tech. Undrafted coming out of high school, Allen combined his talent with a strong work ethic to gain notice. He was the first NCAA Division II player drafted in 2015 and is the highest pick taken from Florida Tech -- four rounds better than Tim Wakefield, an eighth-round pick by the Pirates in 1988.

"Austin has it all," Alou said. "He's a hard-working guy with a lot of talent. I remember seeing him at the pre-Draft workout. He had outstanding power. He didn't hit for much power in his first season, but this year, we're seeing what we expected to see when we drafted him last year."

Allen, who has played some first base in the past, is mastering the catching position in order to give the Padres a left-handed bat at that spot.

"Every single day, there are new situations that come about," Allen said. "I try to learn to become the best baseball player I can be. I talk to our coaches to find out what they see, what I could have done differently, and go from there."

Allen said his work ethic has helped him improve at the plate and behind it.

"I've never been the most talented guy," Allen said. "I had to try to work harder than everybody else. Growing up, my dad always told me, 'There's always someone out there working harder than you are.' I took that to heart at a young age. I always told him, 'No there's not, no there's not [somebody working harder].' Good or bad, at the end of the day, I want to be able to say that I worked as hard as I possibly could. I give it my all every day."

Allen said he is taking his hot start in stride.

Monkey business: Many Minor League Baseball players have pets while they grind through the season. For Bowling Green pitcher Taylor Hawkins, his animal companion is a monkey. "I've always loved monkeys, ever since I saw them at the zoo when I was a little kid," said Hawkins, an Oklahoma native. Hawkins named his monkey after the Planet of the Apes character Caesar, who leads the rebellion against the humans. His parents will be bringing his pet monkey to Bowling Green, and they will care for it when Hawkins is on the road. "He is so much fun. He really puts on quite a show."

Streak business: Peoria's Edmundo Sosa extended one streak and stopped another Saturday night. Sosa's homer against Wisconsin ended a Chiefs stretch of 396 at-bats without a home run. In the same game, Sosa extended his personal hitting streak to 12 games, which he stretched to 14 on Tuesday before going 0-for-4 on Wednesday.

Streak business, Part II: Quad Cities has played seven games at home and dropped all seven. The River Bandits' home-field disadvantage surfaced again Tuesday night in a 7-5 loss to South Bend. Quad Cities erased a three-run deficit to knot the score at 4-4 in the fifth inning, but the Cubs pulled away to keep the River Bandits winless at home.