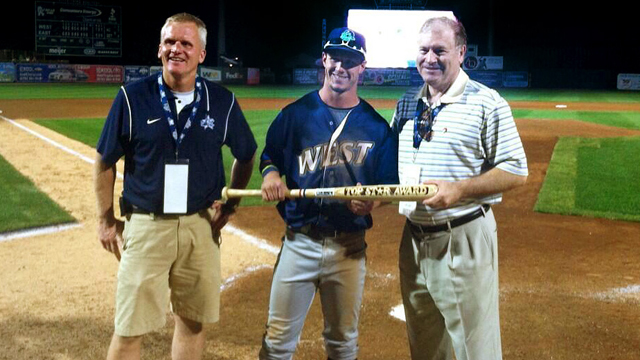 COMSTOCK PARK, Mich. -- Boog Powell had every reason to make a great impression at the Midwest League All-Star Game.

The obvious reason was the chance to show off his skills and send out notice that his potential is sky-high. But there were other reasons for Powell to thrive on a warm picture-perfect night in western Michigan.

One was his family, which made the long trip from California to see the A's prospect shine with the best of the best in the Midwest League. It was worth the trip as Powell helped the Western Division coast to a 7-0 triumph before a crowd of 7,046 at Fifth Third Ballpark.

"My mom, my girlfriend, my dad and my aunt all flew out here to watch this game," said Powell, who capped the experience by earning MVP honors.

The Beloit Snappers outfielder reached base three times, stole two bases -- including home in the first inning -- and scored three runs. After walking in his first two trips to the plate, he was determined to get a hit. The league's leading hitter delivered in the sixth inning, sending a double down the right-field line that plated two runs and extended the West's lead to 5-0.

"The changeup was high and in," Powell said. "I walked my first two times. I wanted a hit, so I swung on the first pitch. It worked out in my favor."

Powell was the A's 20th-round pick in the 2012 Draft out of Orange Coast College in California.

The West cranked out eight hits, including a two-run homer by Burlington's Chad Hinshaw in the sixth that capped the scoring.

The West pitchers took care of the rest, carrying a no-hitter into the eighth before South Bend's Marty Herum singled to right field with one out. The East totaled two hits and Powell's Beloit teammate, Kyle Finnegan, earned the win with a perfect first inning.

"It's great when you go out there for a start and already have a run on the board. It gave me extra confidence," Finnegan said. "For us to go as long as we did without giving up a hit speaks volumes to the pitching we had here. I was happy to get my outs. I enjoyed the moment."

Finnegan said he and the other pitchers on the West staff didn't bring up the no-hitter as the game wore on.

"We tried not to talk about it," he added. "We sat back and just enjoyed it. It was special to watch it."

"It was awesome, but I see him do that every day," the 22-year-old right-hander said. "It's nothing new to me. I'm glad he went out and played as well as he did in the game."

Powell said playing in an All-Star Game was always one of his goals. To be able to accomplish it and thrive at the same time made the night more special.

"It was a dream of mine to play here, and right now it's a dream come true," he said. "I hope I can one day make it to an All-Star Game in the Major Leagues."

Powell knows reaching that level won't be easy, but he is determined to make it happen.

"I just have to keep working hard -- in the offseason and during the season," he said. "There is always more I can do, always something else I can learn. I just want to keep improving and make another dream come true."

Brian Lester is a contributor to MiLB.com. This story was not subject to the approval of the National Association of Professional Baseball Leagues or its clubs.