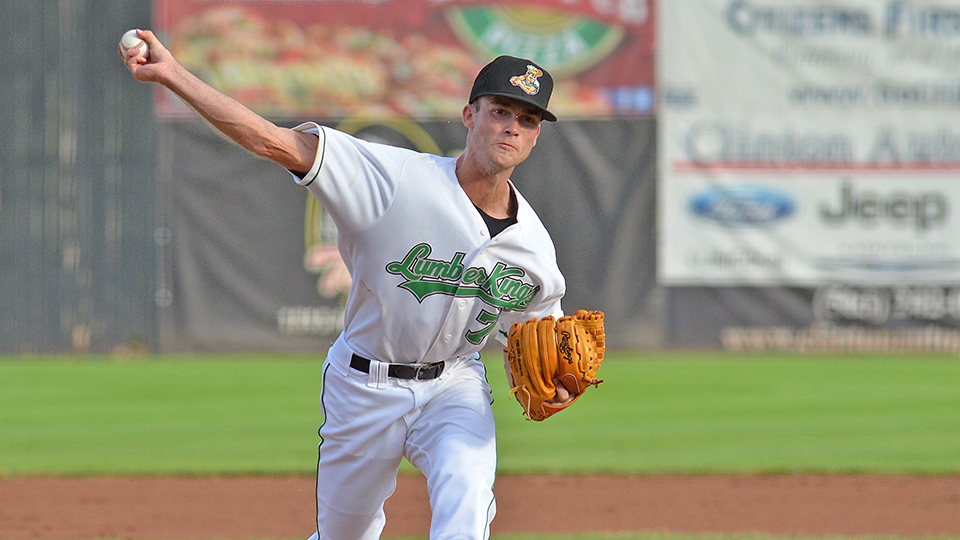 Making his postseason debut, Josh Roberson turned in a start to remember.

The Marlins prospect fanned a career-high 10 and allowed three hits over five innings as Clinton blanked Cedar Rapids, 4-0, in Game 1 of the Midwest League semifinals on Saturday at NelsonCorp Field.

His strong end of the season carried over against the Kernels, when he threw 51 of 75 pitches for strikes and faced three batters over the minimum.

Roberson worked around singles in the first and third innings before pitching a perfect fourth. Tyler Webb singled to start the fifth, but the right-handed UNC Wilmington product fanned Jared Akins and Anthony Prato, then got Trevor Casanova to ground out to second base.

The outing extended a scoreless stretch Roberson began on Aug. 21 to 22 2/3 innings.

Manuel Rodriguez took the ball in the sixth and allowed a hit and a walk with two strikeouts over three innings. Zach Wolf whiffed two in a perfect ninth.

Evan Edwards put Clinton on the board with a two-run homer to center in the second. Christopher Torres drove in a run with a single in the following inning and No. 29 Marlins prospect Peyton Burdick brought in the game's fourth run with a knock in the fifth.

Andrew Cabezas (0-1) took the loss for Cedar Rapids, allowing four runs on six hits and a walk over 4 2/3 innings.

Game 2 is Sunday in Cedar Rapids.

In other Midwest League playoff action:

South Bend notched 10 hits in a Game 1 victory in the other semifinal series. Third-ranked Cubs prospect Brennen Davis, Andy Weber and Jake Slaughter each collected two knocks and an RBI. Brian Glowicki earned a save by holding Great Lakes to a lone hit while fanning three over 1 2/3 scoreless frames. Game 2 is Sunday in Great Lakes. Gameday box score