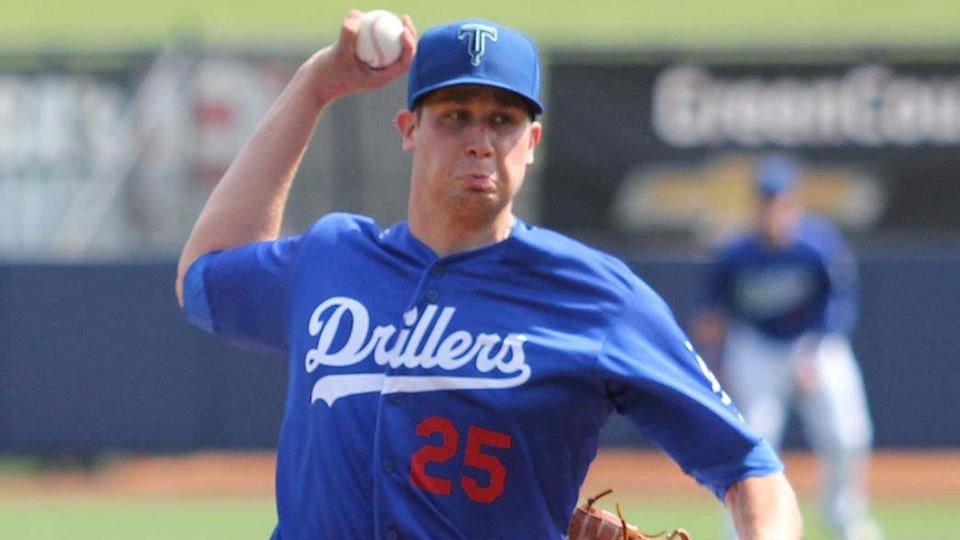 It had already been a year to remember for Brock Stewart when he ran into the Triple-A Oklahoma City clubhouse in late June. Getting set to hit the weight room after starting his day in the hot tub, he'd been summoned to manager Bill Haselman's office.

"I was getting out, so I was just in my compression shorts and Bill Haselman comes up to me and tells me to come into his office real quick, so I had to run into my locker and get a shirt on," Stewart said. "So I was in a T-shirt and compression shorts only and ran into Haselman's office. He was in there with our pitching coach, Matt Herges, and our pitching coordinator, Rick Knapp."

The news that awaited was what Stewart had been working his whole life to hear.

"Haselman just told me, 'Hey, the big league team needs a starter on [June 29]. You're going to go up there and pitch for them and see how it goes. You might be up there for a while or you might come back down. That's what's happening,'" he recalled. "Obviously, I don't care if it's a spot start. I told myself my whole life I wanted to play one inning or pitch one inning in the big leagues and I'd be happy. Hearing that news, I don't remember a thing he said after that. I just kind of broke down, to be honest. I had to take a seat and focus on breathing."

By the end of the season, Stewart had spent 28 of his 121 innings in the big leagues. They were the result of a torrid turn through the Minors that started with Class A Advanced Rancho Cucamonga and included three in-season promotions, the final one to The Show. And after the whirlwind, Stewart wound up notching the 2016 MiLBY Award as Top Starting Pitcher.

After finishing last year with the Quakes, Stewart returned to the California League to start 2016 in part because of a glut of talented pitchers above him in the system, but Dodgers brass stressed that with a hot start, he could move quickly.

"To be honest, after the season started, I just hoped at some point to make it to Double-A in Tulsa," the Dodgers' 14th-ranked prospect said. "When I got that good start in Rancho and then got to Tulsa and had a few good starts there in a row, I kind of realized that this could be a fun year -- and it was."

Two starts and a 0.82 ERA in Rancho Cucamonga gave way to the exact same mark through his first two Texas League outings.

"He was already on a roll when he came," Tulsa pitching coach Bill Simas said. "We just tried to devise a plan for him that worked, and the elevated fastball seemed to kind of keep him moving. The changeup came around and the slider is still a work in progress. He just never missed a beat and ran right through us to Oklahoma City and the big leagues."

In his first nine outings with the Drillers, Stewart went 3-3 with a 1.12 ERA and 62 strikeouts over 56 1/3 innings, tossing a seven-inning complete game June 7 in his Double-A finale. Six days later, he was in Oklahoma City. By the end of the month, he'd toed a Major League mound for the first time, going five innings in his debut at Milwaukee on June 29. It was the culmination of the work the former two-way player at Illinois State put in ahead of the 2016 campaign.

"I saw him at the end of '15 and it was a struggle for him," Simas said. "It was a challenge, first full season of pitching the whole year. It was a challenge. He was out of gas. I think he made a decision to go home and get a little bit stronger.

"He figured out how to be a pitcher and came back this year really good."

Stewart flourished under Simas and the Drillers staff and continued that work after taking the next step.

"Once I got to Tulsa, I thought I was going to stick there the whole year, but things just kept going great for me," he said. "At the beginning of this year, if you told me I was going to be in Tulsa, I would've said, 'Sweet. Double-A, that's huge.' Then I pitched great and got to Triple-A and thought about that. I didn't think I was going to be in Triple-A, so that was definitely a big surprise."

"He came with that confidence, and he had it the year before. You could see it in his eyes," Simas said. "He just was lacking in the gas tank. I saw it grow every start he made. Things we were asking him to do, he executed them, and you could just see it fueling the fire as he went along."

Stewart won his first three decisions in the Pacific Coast League, striking out 27 over 18 2/3 innings in the process. The right-hander worked five innings in his big league debut before returning to Oklahoma City. In nine starts at Triple-A, he was 4-0 with a 2.49 ERA and a 9-1 strikeout-to-walk ratio over 50 2/3 innings. In August, he made two appearances with Oklahoma City and three with Los Angeles. In September, he won two of his three appearances as the Dodgers pushed their way to the National League West title.

"I knew there were going to be some growing pains, and there were," Stewart said. "Since I was moving all over the place, I had to learn on the fly and get a feel for how the game worked at each level. At the big league level, everything happens so quickly, you can go down so quickly or your team can score so quickly. Being able to teach myself to slow the game down when I had to or speed it up when I had to, that was a big part of the growing pains that I had. After those first two starts in the big leagues, being able to kind of settle down and really just focus on what I can control and not worry about what the outcome was."

Those in-season promotions provided Stewart the opportunity to work with a host of pitching gurus in the Dodgers system, from Simas to Oklahoma City pitching coach Matt Herges to Knapp to team special assistant and Hall of Famer Greg Maddux and more.

"That's another thing I say when people ask me how this year has been so great for me," he said. "It's because we have so many great baseball minds and pitching minds in our organization that I've just picked bits and pieces of what everybody has to say and kind of molded them to how they can help me.

"I haven't been pitching that long. This is my second full year as a pitcher and as a starter, so that had something to do with it. But all the great baseball minds, all those people in my corner in the Dodgers organization have helped me immensely."

In 21 Minor League starts, Stewart's numbers were eye-opening. The Illinois native went 9-4 with a 1.79 ERA, striking out 129 against 19 walks over 121 innings. In the Majors, Stewart made seven appearances, including five starts, and went 2-2 with a 5.79 ERA. Excluding his first two starts -- during which he surrendered 14 earned runs over nine innings -- the 2014 sixth-round pick put up a 1.89 ERA.

So how does Stewart explain his meteoric rise? That may be the only part of his year he hasn't quite sorted out.

"Every reporter or every beat writer has asked me the same question and I try to explain it, but I really can't," he said with a laugh. "All I know is it just happened, you know? I can't explain it. It's just baseball. It's the same game. I remember the day I left for Spring Training, and two days ago I got home and it felt like nothing happened; but in fact, all that happened. It was just a big blur, to be honest. It's just crazy."