Cubs No. 13 prospect fans 10 in five hitless in sweep to crown 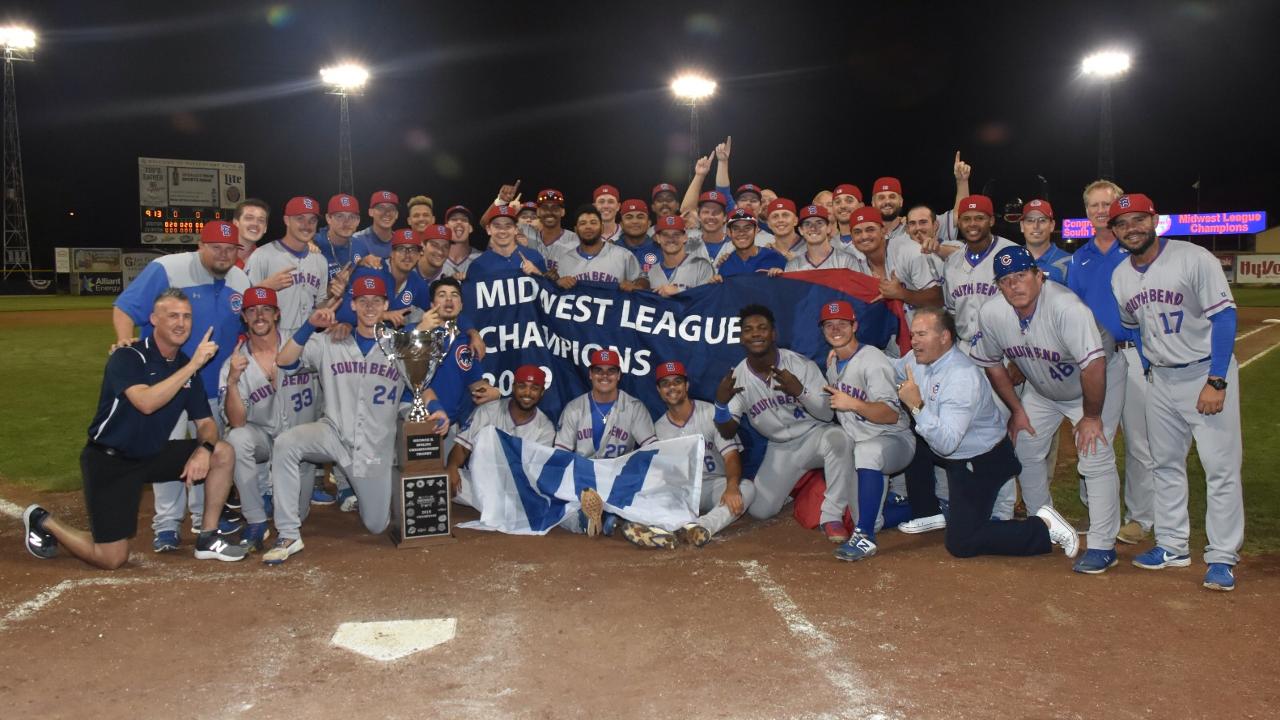 Riley Thompson and many of his teammates had their first taste of professional ball -- and playoff success -- while sweeping their way to a Northwest League championship. A year later with Class A South Bend, he and his fellow Cubs prospects pulled off yet another perfect postseason.

Chicago's No. 13 prospect struck out 10 batters over five hitless innings, piloting Class A South Bend to a 5-0 win over Clinton at NelsonCorp Field to complete the three-game sweep and claim the Midwest League crown. It marked the first title for South Bend -- a perfect 7-0 in the postseason -- since becoming a Cubs affiliate in 2015.

Thompson was enthused to have won the title, but the feeling was amplified by those he did it with.

"I was in [Class A Short Season] Eugene last year and we won a championship and we swept the postseason too," he said. "There's a lot of the same guys on this team, we have not lost a postseason game. So that's a pretty cool accomplishment."

On the grandest of stages, Thompson came out firing on all cylinders. The right-hander struck out the side in the first inning, using just 11 pitches to get all three LumberKings swinging. He began the second with two more punchouts, then got Evan Edwards to pop out to second base.

The 2018 11th-round pick sat Clinton down in order in the third, but made an errant throw to first base that let Christopher Torres reach to start the fourth. Thompson quickly made up for it by picking off Torres two batters later to end the inning. He capped his performance by striking out the side in the next frame, exiting after facing the minimum.

The Louisville product took the field with confidence, but couldn't help but feel a bit nervous when he first stepped onto the mound.

"I just wanted to treat it like another game. I mean, obviously it's not," Thompson said. "But the nerves are always there first time I go out there. I always get nervous."

A pair of homers powered South Bend's offense. After Nelson Velazquez doubled with two outs in the second, Levi Jordan deposited a two-run shot over the fence in left field for the first runs of the game. Clayton Daniel led off the fifth with a walk before Andy Weber belted another two-run shot to left. The shortstop later tacked on another run with an RBI single in the ninth.

"That's awesome, especially talking about shifting momentum and taking the momentum early," he said. "I mean, that is huge to get a home run like that, go on the board early. That's huge. The offense came up clutch."

A trio of Cubs linked up out of the bullpen to close out the shutout. Right-hander Fauris Guerrero allowed two hits and struck out three over two frames, southpaw Eugenio Palma followed with a spotless eighth and righty Brian Glowicki finished it off with a 1-2-3 ninth.

Thompson may not have expected another clean sweep of the postseason, but he wasn't necessarily surprised either.

"We did it last year, so everybody was pretty bought in, everybody wanted to win another ring," he said. "It's just a testament to the team."

And while winning back-to-back titles is impressive, the benefits for Thompson and company won't stop there. He believes that as they rise through the ranks, the knowledge of how to win will be able to keep paying off.

"It's huge for our confidence ... to get a taste of victory last year and then this year, to do it in the fashion we did it, it's awesome to me," he said. "You just get a taste for winning and you just want to do it again."