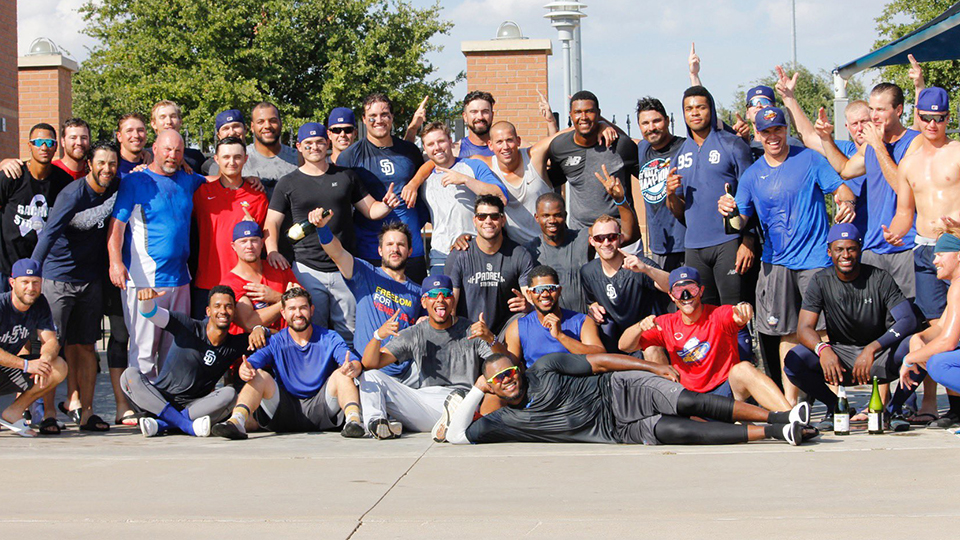 Amarillo is three victories away from claiming a Texas League title in its inaugural season. (Amarillo Sod Poodles)

In their first year of existence, the Amarillo Sod Poodles are headed to the Texas League Finals.

Second-ranked Padres prospect Taylor Trammell went 2-for-3 with a walk and a run scored as Amarillo built an early lead and held on to beat Midland, 7-5, in the deciding Game 5 of the semifinals on Sunday at Security Bank Ballpark.

The Sod Poodles scored all their runs in the second inning, when the first seven hitters reached against RockHounds starter James Naile. After a single, a double and a walk loaded the bases, first baseman Kyle Overstreet cleared them with a double. Padres No. 25 prospect Buddy Reed plated Overstreet with a single and took second on the throw.

"That's one thing we preach in this organization, is on-base percentage and getting on base," Amarillo manager Phillip Wellman said, "and guys have taken it to heart. We executed tremendously well and got big hits."

Trammell was credited with a sacrifice when he tried to move Reed over to third, but first baseman Dan Gamache was charged with an error on the missed catch. Tyler Alexander replaced Naile (0-1), but Ivan Castillo cranked the first pitch he saw for a three-run homer to left-center field to complete the outburst. By game's end, every Amarillo batter recorded at least one hit.

Midland began to mount a comeback in the fifth as Chase Calabuig hit an RBI groundout, Brallan Perez lifted a sacrifice fly and Nate Mondou delivered a two-run double. The RockHounds tacked on a run in the sixth on Collin Theroux's dinger.

"That may have been the longest, mentally straining game I've ever managed in my life," Wellman said. "Our offense kind of went into hibernation. And they just kept pecking away, to their credit."

Jordan Guerrero (1-0) pitched two innings of hitless relief to earn the win and Travis Radke set down Midland in the order in the ninth for the save.

"Jordan Guerrero will go down as an unsung hero in this game because he really came in and attacked and was aggressive," Wellman said. "He restored order. He was the stopper."

Amarillo hosts Tulsa in Game 1 of the Finals on Tuesday.

"The way the support has been all year long and they pack the house every night," Wellman said, "it'll be electric."

In other Texas League playoff action:

Dodgers No. 21 prospect Edwin Uceta gave up a run on five hits over six-plus innings as Tulsa won at home in Game 5. Connor Wong -- Los Angeles' 28th-ranked prospect -- singled and scored in a two-run third and delivered an RBI single in the fourth. He hit safely in all five games in the series, going 7-for-18 (.389) with four RBIs and five runs scored. Luis Vasquez threw three innings of hitless relief to earn the save. Gameday box score