Adell focused on taking next step in AFL 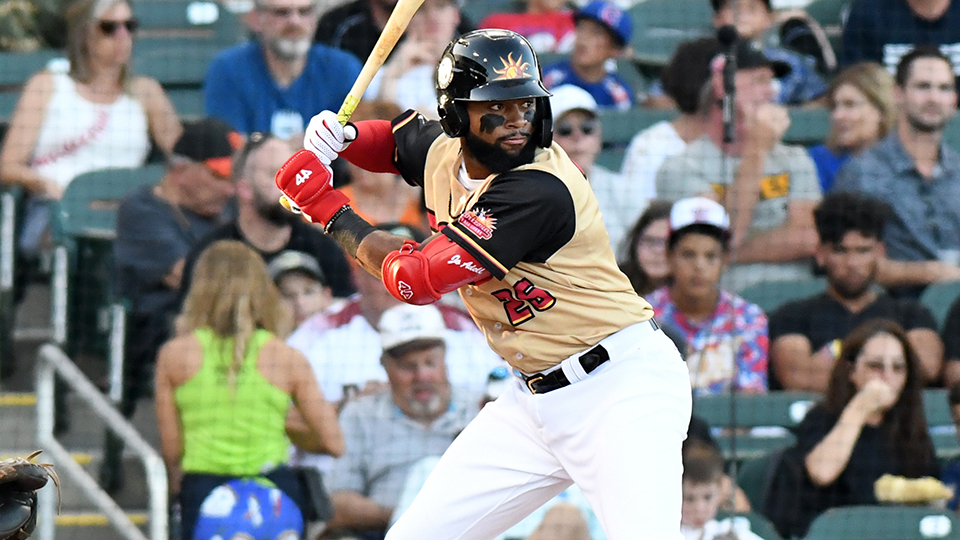 With two weeks left in the Arizona Fall League season -- one that included an appearance in the Fall Stars Game -- and a spot secured on Team USA for Olympic qualifying, Jo Adell is exactly where he wants to be.

Getting to this point, however, did not exactly follow a straight line for the 20-year-old.

The #Angels top prospect led off the game with a long fly on Wednesday night.pic.twitter.com/o6UBKyXI7S

After suffering a pair of leg injuries in a Spring Training game in March, Adell had the start of his season delayed by two months. He completed a six-game rehab stint with Class A Advanced Inland Empire, then joined Double-A Mobile on June 3.

"It was tough," Adell said. "I got hurt and wanted to get back quickly but also wanted to make sure I came back the right way. Then, when I made it to Mobile, I was still trying to make up some Spring Training at-bats. It took about two, three weeks, but then I got back into my groove. I was back in my element and everything was moving the way I wanted to. It was awesome."

Adell instantly became the youngest active position player in the Pacific Coast League. And with that distinction came new challenges for the 10th pick in the 2017 Draft.

"The game is played a little differently at that level," he said. "The pitchers have unbelievable frontline stuff and it also becomes kind of a mind game -- picking and choosing how to be smart in the batter's box, how to make the smart play in the field. You really have to be a smarter player all-around at the Triple-A level and really let the tools you have show out most."

"It's really an adjustment for anyone to play at this level, there's a lot of older guys at Triple-A and obviously [Adell] wants to come in and make an impression on the organization; obviously, there are a lot of people watching and I think he may have just put too much pressure on himself," Bees manager Lou Marson said. "But I think our hitting coach [Brian Betancourth] did a great job of getting him back to where he was in Mobile. I just had more conversations with him about going out and just being athletic and trusting his natural ability.

"He handled himself like a pro. For a guy who has always had so much success throughout his career, you don't know how they will react to failure. But like they say, you learn from failure. So I think this was a great experience for him, and he never got too low. If he had a bad at-bat you could tell he knew he was gonna have more at-bats to come throughout the game. I think we'll be watching him in Anaheim before you know it."

Marson also had a few close calls during those at-bats while serving as third base coach.

"Man, you gotta be really careful and alert when he's up there," he said with a chuckle. "The ball just jumps off his bat. When he barrels it up, his exit velocity is elite. Even the ground balls get through the infield in a heartbeat. So, yeah, being down that line, if he hooks one you gotta make sure you keep yourself safe down there."

Despite finishing the season at the Minors' highest level, the time he missed at the start of the season limited him to 76 games and 305 at-bats. So the Angels decided to send him to the AFL, where he'd face elite prospects from all 30 organizations.

"Because he missed a good portion at the beginning of the season, he was completing the regular season with a couple hundred plate appearances shy of what we anticipated he would get in 2019," Angels director of Minor League Operations Mike LaCassa said. "In addition, we felt just the opportunity to play against that level of competition and in that environment could only further enhance his development."

Aside from picking up more at-bats, Adell has added a new wrinkle to his game. While he spent most of his time in the Minors in center field, the Louisville native has played the corner spots with the Mesa Solar Sox.

"There's not one thing in particular we are looking for with him there, it's more just about continuing to get reps and refine his skills in all aspects of his game," LaCassa said. "He's played mostly center to this point in his development and he's getting more reps in the corners to be able to play all three positions at a high level. And the reps against the kind of pitching in that league is only going to be to his benefit."

Similar to how things went in Salt Lake, Adell got off to a slow start in Arizona. He had one hit in his first 24 at-bats and, by his own admission, just needed to find his rhythm. And in familiar fashion, he did. Adell was named AFL Player of the Week on Oct. 7 after going 7-for-17 with a homer, three doubles, five RBIs and four runs scored. He ended the week riding an eight-game hitting streak.

Through his first 18 AFL games, Adell batted .260/.360/.416 with a pair of homers, six doubles, 13 runs scored, seven RBIs and three steals. He started for the East squad in the Fall Stars Game on Saturday.

"I had some things get out of whack at the end of my time in Salt Lake, so I got here with some stuff to work through that I had to fix," Adell said. "There was some stuff in my swing that wasn't where it needed to be and it affected my decision-making. So I had to get back to the rhythm of where I was throughout my time in Mobile, and I was able to get back into that. So that's really what it was. It was nothing to be worried about; I knew I would have to work through some things and I did that and I feel great right now."

Last week, Adell was included on USA Baseball's roster for the Premier12 tournament in November in Mexico, where the Americans can take a step toward qualifying for the 2020 Olympics.

"It was huge. To have the chance to represent your country and go overseas and play the game you love, it's unbelievable," he said. "Especially, you know, you end the year and you don't know what is in store and then all of a sudden you find out in November you're going to be playing in Japan for the USA. It's pretty surreal."

He also didn't mince his words when asked about his goals with Team USA:

"I wanna win. I wanna go over there, qualify strong and then get a gold medal in the 2020 Olympics. That's it."

Marson, who played on the 2008 Olympic team in Beijing, feels the experience will only benefit the five-tool standout.

"It's a great experience to represent your country and to get those kinds of at-bats and a brighter stage like that," he said. "Anytime you can play on a team like that around great players and coaches, it's only a positive for him."

One thing is certain: whatever lies ahead for Adell, the organization is confident he'll be ready and well-equipped to handle the challenges.

"From the day he arrived, we couldn't be happier with what Jo brings to the ballpark. And what he does away from the ballpark is equally as special," LaCassa said. "And now he has the opportunity to play for the country in the Olympics, and that's an experience that most players will never have. I couldn't tell you what it's like. But to get more baseball reps and on that kind of stage against that competition is an experience I think is going to stay with him.

"There is no set plan in place right now. He's going to continue to play multiple spots in the outfield and continue to develop at the plate, and his performance will dictate what his path is."