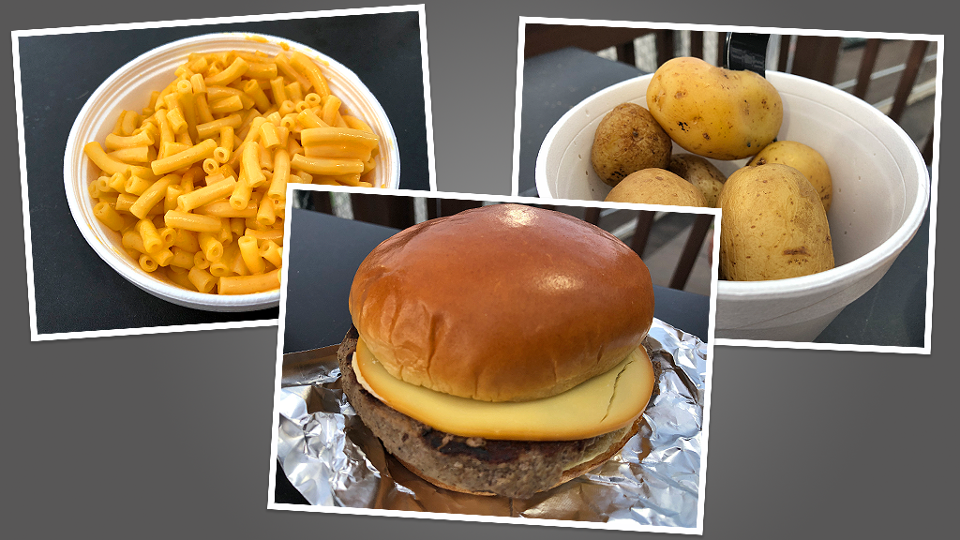 The Auburn Doubledays offer the complementary triumvirate of cheeseburgers, salt potatoes and macaroni and cheese.

Tom, a Buffalo, New York native who now lives across the border in Fort Erie, Ontario, has experience as a food and beverage manager in a variety of professional sports settings. He currently handles club-level concessions at the Buffalo Sabres' home of KeyBank Center; this job followed stints with the likes of the Cleveland Indians, Detroit Tigers, Detroit Lions, South Bend Cubs and, in 2018, the Erie SeaWolves.

Tom knows food, so therefore it was fitting that he was my Designated Eater for July 12's Auburn Doubledays game. In this capacity, it would be his job to eat the ballpark cuisine that my gluten-free diet prohibits.

Tom and his wife, Taylor, made the trip to Auburn's Falcon Park from Ontario. It was a long drive, but he said that this trip -- and any Minor League ballpark trip -- was well worth the border-crossing hassle

Tom has created more than his share of envelope-pushing concession items over the years, with a particular emphasis on unorthodox desserts. For '90s Night, he concocted a sundae topped with Gushers fruit candy. For Christmas in July, he assembled a bowl of sweets inspired by Buddy the Elf's breakfast pasta. But his coup de grace was 2018's Cotton Candy Dog, created for the SeaWolves "Sugar Rush" theme night.

"It was pretty cool," said Tom. "It started with me throwing a bunch of candy onto my desk, and eventually Jimmy Fallon's talking about it."

The Cotton Candy Dog was such a hit, Tom was motivated to get it permanently inked onto his leg. Now that's dedication.

He now has his creation tattooed on his leg. pic.twitter.com/GOhCkD0glc

But on this night, there would be no Cotton Candy Dog-style concoctions to devour. The Doubledays -- Class A Short Season affiliate of the Washington Nationals -- are a comparatively no-frills, small town operation. Baseball as it used to be, some might say. The team's primary concession stand, situated in a small structure behind home plate and staffed largely by teenagers, stuck to the basics.

From the above menu, Tom and I chose the following three items: A Gouda Cheeseburger, Salt Potatoes (a Central New York specialty) and Kraft Mac and Cheese (just like Mom used to make, when Mom didn't have the time or energy to make anything else).

This triumvirate of items were fine for what they were, but what they weren't was particularly exciting. Our culinary escapade was being documented on Twitter, and Twitter runs on exciting #content. So what could we do to spice things up? Tom, being the food and beverage professional that he is, had an idea: Why not combine the cheeseburger, salt potatoes and mac and cheese into a new, standalone item?

Would you eat this burger? pic.twitter.com/b1hGPvp26U

Tom was pleased with his improvised new invention, which he dubbed the Salted Kraft Mac Daddy Burger.

"Obviously, I admire the creativity," he said humbly. "The mix of the salt potatoes and the gouda cheese worked well, and the Kraft mac and cheese took me back to a simpler time. And the burger itself is good. We [in food and beverage] always talk about the visual, where someone walks by, sees something, and then wants to try it. Like, 'Oooh, where did that come from?'

"I think the Doubledays should give this a shot. Make it a secret menu item."

And with that bit of concessions-based improvisation, Tom's work was done. In addition to being the inventor of the Cotton Candy Dog, he now has another claim to fame: Designated Eater.