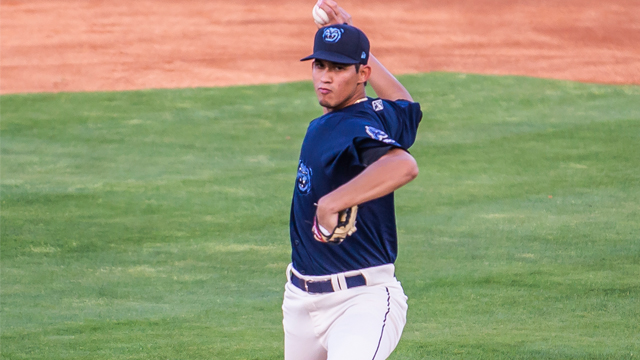 MOBILE, Ala. (April 25, 2018) - The Mobile BayBears, the Double-A affiliate of the Los Angeles Angels, took a no-hitter into the ninth inning and edged out a 2-1 win over the Mississippi Braves in the series finale Wednesday at Hank Aaron Stadium.

Jesus Castillo (2-1) pitched a career-high seven innings and did not allow a hit. The only Mississippi (8-12) batter to reach was Alex Jackson, who was hit by a pitch in the second, but he was quickly erased with an inning-ending double play. Castillo faced the minimum and struck out four.

Conor Lillis-White worked a hitless eighth inning, but Tyler Marlette led off the ninth with a double to left-center field. Marlette scored on a sacrifice fly to cut Mobile's lead to 2-1, but Lillis-White got out of the inning and earned his second save of the series.

Wade Wass hit his first home run off Enderson Franco (0-2) to give the BayBears (10-9) a 1-0 lead in the fourth inning. Taylor Ward drove in Bo Way with an RBI single in the seventh.

The BayBears begin a five-game road series against the Montgomery Biscuits Thursday at 6:35 p.m. CDT. Right-handed pitcher Luis Pena (0-2, 7.11 ERA) is scheduled to make the start against southpaw Genesis Cabrera (1-2, 2.74 ERA) for the Biscuits. Live coverage can be seen on MiLB.tv (subscription required, promo code: BAYBEARS) and heard on the BayBears Broadcast Network, the TuneIn Radio App, and the MiLB First Pitch App, with the Countdown to First Pitch starting at 6:15 p.m.

The BayBears return home next Wednesday and host a total of 70 home dates through Labor Day, September 3. Single-game tickets and ticket packages are currently on sale. Season tickets and group and hospitality offerings for the 2018 season can be reserved by calling (251) 479-BEAR (2327).