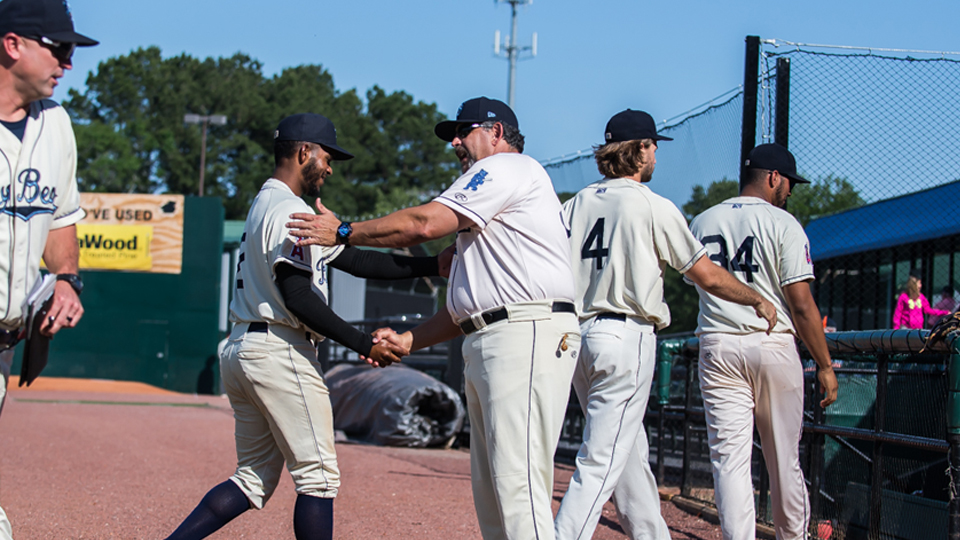 MONTGOMERY, Ala. (August 26, 2017) - The Mobile BayBears, the Double-A affiliate of the Los Angeles Angels of Anaheim, saw an early two-run lead slip away but never trailed in a 4-3 victory over the Montgomery Biscuits in 12 innings Saturday night at Riverwalk Stadium.

With the game tied 3-3 in the top of the 12th inning, Forrestt Allday led off with an infield single and advanced to second base on a throwing error. After a sacrifice bunt, Alberto Triunfel put the BayBears (62-68 overall, 32-29 second half) ahead with an RBI single to left field off Kyle Bird (4-2). Triunfel finished the game 3-for-5.

Matt Thaiss drove in two of the first three runs for the BayBears with a single in the first and a double in the fifth. The BayBears led 2-0 and 3-1 before Montgomery (73-58, 36-25) tied the game with a pair of runs in the bottom of the sixth inning.

Joe McCarthy put the Biscuits on the board with a solo home run in the fourth, and he scored again on a Dalton Kelly single in the sixth. The next batter, Justin Williams, followed with an RBI double to tie the game 3-3.

The BayBears continue the five-game road series against Montgomery Sunday at 5:35 p.m. CT. Right-handed pitcher Jesus Castillo (0-0, 4.61 ERA) is scheduled to make the start against southpaw Anthony Misiewicz (2-1, 6.08 ERA) for the Biscuits. Live coverage can be seen on MiLB.tv (Montgomery feed, subscription required, promo code: BAYBEARS) and heard on the BayBears Broadcast Network, the TuneIn Radio App, and the MiLB First Pitch App, with the Countdown to First Pitch starting at 5:15 p.m. CT.

The BayBears return home Thursday and host a total of 70 home dates through Labor Day, September 4. Single-game tickets and ticket packages are currently on sale. Season tickets and group and hospitality offerings for the 2017 season can be reserved by calling (251) 479-BEAR (2327).

The 2018 BayBears schedule has been released and is available by clicking here. Game times and promotions will be announced at a later date.