Beyond the Bobblehead: Ben's Best Promos 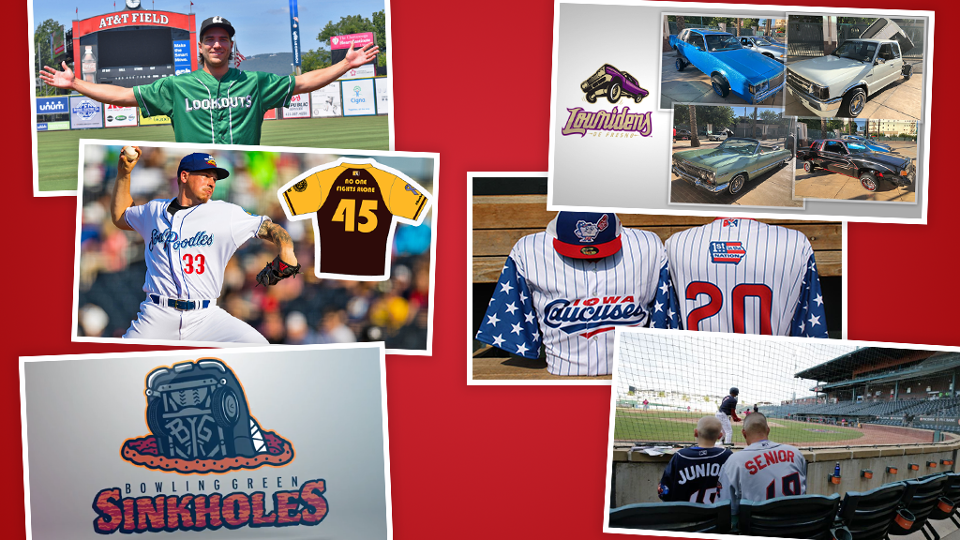 The Golden Bobblehead Awards represented the tip of the best promo iceberg. These are six of Ben Hill's overlooked favorites.

No Golden Bobblehead nomination? No problem.

The annual Golden Bobblehead Awards, a peer-voted honor recognizing the best promotions of the season, were announced at the Minor League Baseball Innovators Summit on Sept. 26 in El Paso. Previously, I wrote about the 2019 Golden Bobblehead winners and also offered an extensive rundown of the Best Theme Night category. Several of the Theme Night nominees also made my list of 2019's top promos, such as Omaha's Potholes Night, Corpus Christi's No Phones Game, Charleston's Helen McGuckin Night and, the eventual Best Overall Promotion winner, Wisconsin's Salute to Cows.

But there's much more where that came from, and that's what I provide a look at here. What follows is a breakdown of my six favorite promotions of the 2019 season that were not nominated for a Golden Bobblehead. It's time to spread the love.

Every Tuesday, the Jacksonville Jumbo Shrimp offer a Two for Tuesday ticket special, in which two tickets can be obtained for the price of one. On July 30, the Marlins' Double-A affiliate took the idea literally by only admitting two fans to the ballpark. This resulted in the lowest attendance in Southern League history, but the Jumbo Shrimp were motivated by far more than the desire to pull off a goofy publicity stunt. The two fans in question were 12-year-old Joshua "Junior" Ribiero, battling a rare form of cancer, and his father, Joshua Sr. The Jumbo Shrimp, in partnership with the local Dreams Come True wish-granting charity, provided the Ribieros with the baseball experience of a lifetime. Joshua Jr. had the run of the park as he met the players, scrambled for foul balls, caught T-shirts and enjoyed all the concession items he could eat. Meanwhile, the team staged a party for fans just outside the left field Tiki Terrace. When the game became official in the fifth inning, those fans were admitted to the ballpark so they, too, could cheer for Junior. Simply put, this was the best promotion of the season.
Straight from the source: "[Junior] found out a week or so ahead of [the game]. When he got here, seeing the look on his face was incredible. He was in the clubhouse meeting our guys, threw out the first pitch, played all the between-inning games. He and his dad sat by our dugout in the front row, so he was talking to [the players] the whole time." -- David Ratz, Jumbo Shrimp director of promotions

Dozens of alternate Minor League identities made their debuts this year, encompassing everything from Copa de la Diversión to regional foodstuffs to What Could've Been Night. But in this writer's humble opinion, the best -- or at least the weirdest -- were the Bowling Green Sinkholes. The Bowling Green Hot Rods assumed this identity on Aug. 30, celebrating the fifth anniversary of the time a giant sinkhole opened under Bowling Green's National Corvette Museum and eight classic cars plunged into the abyss. The Sinkholes jerseys featured a submerged car with "BG" visible on the undercarriage, as well a sleeve patch depicting a bespectacled mole decked out in a construction vest. That evening's game, timed to coincide with the Bowling Green's National Corvette Caravan, included sinkhole-themed between-inning entertainment as well as the debut of the Sinkhole Burger (featuring a Matchbox hot rod car placed within the hole of its donut bun).
Straight from the source: "[Sinkholes are] part of the topographical makeup of Bowling Green and the region. Mammoth Cave is 35 minutes up the road, the largest cave system in America. It's a serious thing, having the ability for these sinkholes to open. Most are relatively small. Last week a cow fell into one and it had to be rescued out of it." -- Eric Leach, Hot Rods general manager

On Aug. 23, the Chattanooga Lookouts became the first Minor League Baseball team to host a 100 percent carbon-neutral game. On Green Power Night, thought a partnership involving the team, the Tennessee Valley Authority (TVA) and city-owned utility company EPB, the Lookouts' home of AT&T Field was powered by locally generated solar energy credits. These credits, which offset the ballpark's carbon output, came courtesy of Chattanooga's Solar Share installation. The Lookouts' first-of-its-kind endeavor served to educate fans about solar energy options while establishing a template for other Minor League teams to follow. The Reds affiliate wore green jerseys to underscore the eco-conscious message.
Straight from the source: "People are becoming more and more interested about where their power is coming from. We need people to understand what programs are available, whether you're a renter, a homeowner or run a small business." -- Chris Niblock, TVA program manager

The Fresno Grizzlies participated in Minor League Baseball's Copa de la Diversión program in 2019, with their Lowriders moniker celebrating Fresno's car culture as well as the city's central placement between the fertile lowriding scenes of San Jose and Los Angeles. This writer was in attendance for the team's second and final Lowriders Weekend, which featured a memorable in-game car-hopping contest. Even more memorable was what occurred on June 15, when the Grizzlies debuted their new alternate identity by staging a massive lowrider car show on Fulton Street (located just beyond the outfield entrance of the Grizzlies' Chukchansi Park). The show's People's Choice Award winner, a '63 Chevy Impala hardback, will be prominently featured in the 2020 Lowriders logo.
Straight from the source: "We were really excited that it gave us a platform to educate on a national level that lowriders aren't negative. I mean, in the movies it's always the gangbangers that jump in the lowrider and drive off. But then you start meeting people who are actually involved in this culture. This is engineering and art meeting in harmony. That was one of the big things we were trying to push." -- Sam Hansen, Grizzlies director of marketing

The 2020 presidential race officially kicks off on Feb. 3 with the Iowa caucuses. On Aug. 30, the Iowa Cubs celebrated their state's first-in-the-nation voting status by forgoing their regular identity and playing a game as, yes, the Caucuses. This resulted in that rarest of things in American society: a non-polarizing politically themed event. The Caucuses' red, white and blue uniforms were augmented by a cap logo that featured an anthropomorphic state of Iowa brandishing a "We're No. 1" foam finger. While no presidential candidates were at the ballpark on Caucuses Night, the I-Cubs hosted Joe Biden, Beto O'Rourke and Pete Buttigieg during the 2019 season.
Straight from the source: "The objective was always to be non-partisan and patriotic, tying a non-sports entity into who we are as a baseball team." -- Randy Wehofer, Iowa Cubs assistant general manager

David Bachar, the father of Amarillo Sod Poodles pitcher Lake Bachar, was diagnosed with cancer in 2018 and has been fighting ever since. On Aug. 17, Bachar Strong Night, the team's players, fans and front office showed their support. The Sod Poodles, a San Diego affiliate, took the field in throwback Padres jerseys emblazoned with the Bachar family's rallying cry of "No one fights alone." The jerseys, as well as a variety of Sod Poodles and Padres memorabilia, were auctioned off and the proceeds went toward covering the family's medical expenses.
Straight from the source: "Even when [Lake] doesn't have his best stuff, he goes out there and competes. Lake's dad battles the way Lake pitches. Whether he has his best stuff or not, he's going to go out there and battle. He's been doing that through 32 chemo treatments. He's going to go out there and fight this thing." -- Tony Ensor, Amarillo Sod Poodles president