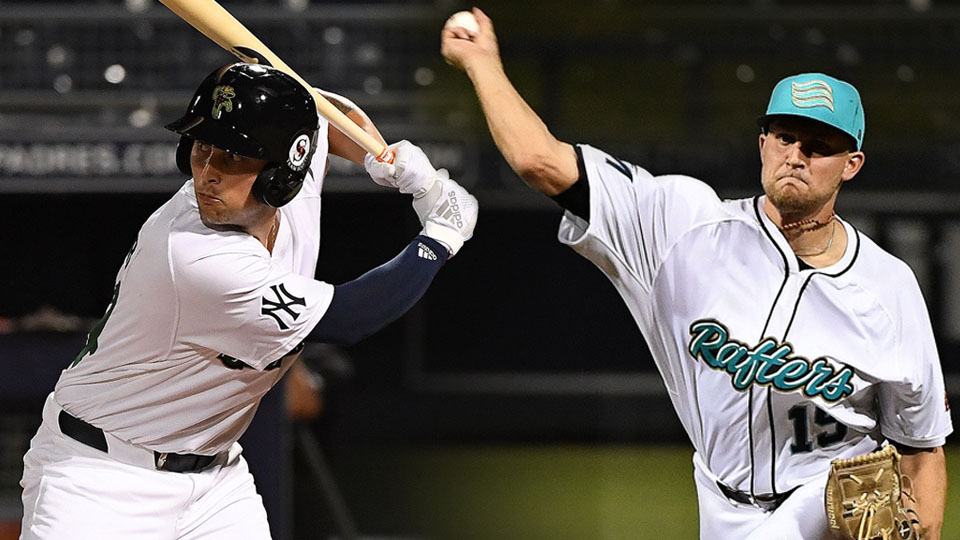 Brandon Wagner and Nick Neidert are the second batch of players honored by the Fall League in 2019. (Jill Weisleder/Getty Images)

It's time for the Player of the Week chains to find a new home.

Congratulations to @NickNeidert and Brandon Wagner on winning the Championship Chains Pitcher and Hitter of the Week!@ProAmBelts pic.twitter.com/YfDzsXg8Wp

Wagner went 5-for-13 (.385) over four games in the second week of Fall League play, but it was his grand style that won him this latest honor. The 24-year-old, left-handed slugger crushed a pair of grand slams, both against Peoria. Wagner went deep with his first long ball of the fall last Tuesday off Padres left-hander Osvaldo Hernandez in a 6-4 win on the road and followed that up with another four-run shot on Sunday -- again off Hernandez -- in an 11-4 romp. The Yankees prospect finished 3-for-4 with the homer, a double and seven RBIs in that win. His 11 total RBIs led the Fall League last week while his .923 slugging percentage and 1.452 OPS each ranked second among qualifiers.

Neidert was one of only three AFL pitchers to make two starts last week, and the Salt River right-hander made the most of them. The Marlins' No. 11 prospect began by striking out six and allowing just one hit and one walk over four scoreless innings against Mexican League side Hermosillo last Tuesday. He completed five frames five days later at Glendale, giving up one earned run on three hits and one walk and fanning three. Neidert's nine innings, 1.00 ERA, 0.67 WHIP, nine strikeouts and .129 average-against for the week were all tops among AFL qualifiers.

The 22-year-old righty was limited in 2019 after undergoing knee surgery early in the season. The bulk of Neidert's appearances came at Triple-A New Orleans, where he posted a 5.05 ERA with 37 strikeouts and 22 walks in 41 innings. The 2015 second-rounder threw only 54 innings total during the regular season because of his injuries and headed to the Fall League to make up for that lost time. He has posted a 2.38 ERA with 12 K's over 11 1/3 frames in total so far with Salt River.