D-backs prospect works on elevating ball in debut with Osprey 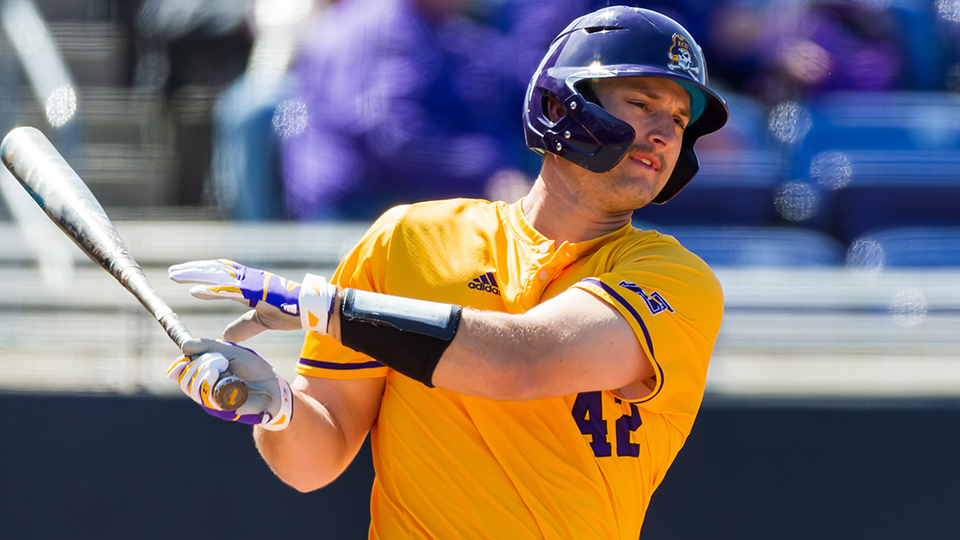 Drafted out of East Carolina, Spencer Brickhouse is batting .270 with three homers and 26 RBIs in 43 games for Missoula. (Rob Goldberg Jr.)

Every professional baseball player has a day that doesn't go right. For Missoula's Spencer Brickhouse, July 31 was that day.

It was four at-bats, four strikeouts at Idaho Falls for the 6-foot-4, 235-pound first baseman who -- before he was drafted in the seventh round by Arizona in June -- had a 32-game hitting streak at East Carolina University.

Then he got up again, made contact and, to the enjoyment of his Osprey teammates, thanked the heavens above.

"I will say this," Missoula hitting coach K.C. Judge said. "He's one of the most positive hitters I've been around."

That is handy when you're retooling your swing for the professional game. Judge has been working with the left-handed-hitting Brickhouse on elevating and pulling the ball.

"He's a guy we expect to put up plus offensive numbers," Judge said, "especially in a field like the one we have in Missoula."

It's a short shot to right (287 feet down the line) at Ogren Park at Allegiance Field, lightly guarded by a 27-foot fence. Elevated railroad tracks sit tantalizingly close.

Brickhouse has hit .356 with all three of his home runs at Missoula; road woes have lowered his average to .275 overall in the Rookie Advanced Pioneer League.

"It was one of those days," Brickhouse said of that Idaho Falls game. "I've been working with the hitting coach most every day to see what a professional swing should look like and get to that point.

"I just wasn't seeing the ball. On those days, I have to tell myself to play good defense and contribute other ways and not be a waste of space out there."

Judge calls "Brick" a team player whose attitude will win out through this retooling.

"When he got here, everything was pretty low," he said of Brickhouse's swing. "If he pulled it, it had top spin and wasn't really true. That game, it was a timing issue, I would say. We took a look at video of the swing. If you're off timing-wise, it's not going to go well."

Brickhouse got a couple days off, one of them scheduled. After a rainout in Missoula, he had three hits in a doubleheader sweep of the White Sox-affiliated Great Falls Voyagers. His third home run, in the sixth inning of the nightcap, put Missoula ahead for good, 3-2.

"Just a lot more comfortable at the plate," Brickhouse said. "I felt a lot more fluid with the stride -- my timing was better."

It's why he hits in the middle of the lineup for a team that -- despite seeing closers Mailon Arroyo (Hillsboro) and Ryan Fritze (Kane County) moved up at the end of the first half -- got off to an 8-3 second-half start in the Northern Division.

Brickhouse was a mechanical engineering major at East Carolina, so he might seem like a natural to tinker with a swing. In the end, he's resolved not to overthink things.

"I try not to," he said. "If you try to think about it analytically, you get messed up and start looking at stats -- instead of just going up there and being smooth."

He's a heeler: In his first year of pro ball, Missoula's Dustin Lacaze has a 3.86 ERA that would be 2.73 but for one bad relief outing at Idaho Falls in late July. He also has a good touch with a lasso -- he team ropes with his stepdad, Stormy Wolf, when he's not throwing his slider. "I still have some horses," the 21st-round pick out of Texas A&M Corpus Christi told the Missoulian newspaper. "When I go home [to Angleton, Texas] for the break I'll try to rodeo here a little bit."

Fritz Neighbor is a contributor to MiLB.com. This story was not subject to the approval of the National Association of Professional Baseball Leagues or its clubs.