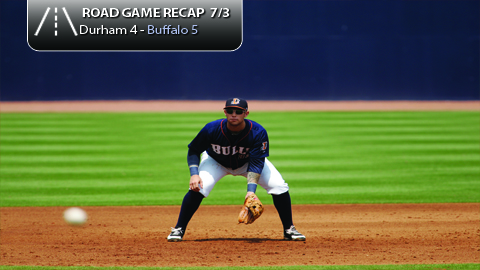 Buffalo, NY --- Aiming for history, the Durham Bulls fell 5-4 to the Buffalo Bisons before 15,930 fans at Coca Cola Field on Tuesday night.

The inning continued with another hit before heavy rains fell, forcing a delay after a Brandon Gomes pitch sailed to the backstop on the fly. After a 75-minute rain delay, the game resumed with runners at second and third with two outs and the game tied 4-4. Frank DeLosSantos relieved Gomes (L, 4-2) and on his second pitch, Jordany Valdespin tapped an infield single past the reach of the Bulls reliever and O'Malley couldn't barehand the ball as Reyes scored the winning run.

The Bulls (41-46) were bidding for their first-ever Triple-A season-series sweep, but after taking the first seven of the meetings with Buffalo (42-44), the Bulls were denied in the final meeting of the year with Buffalo.

Lance Pendleton worked the first six innings for the Bulls, fanning three and allowing four hits and three runs (two earned). Brian Augenstein pitched two scoreless innings to get the game to Gomes for the ninth.

The Bulls return home for a 4th of July celebration on Wednesday night at 6:05 PM ET.