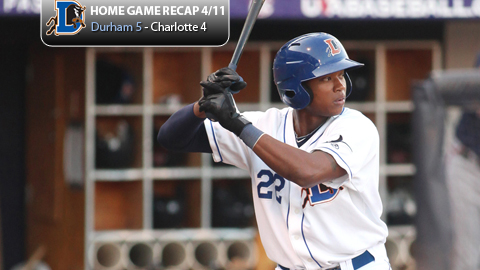 DURHAM, NC - The Durham Bulls capped off their first homestand with a 5-4 victory over division rival Charlotte in a Wednesday matinee game at the DBAP. Matt Mangini extended his team leading hitting streak to six games as the Bulls won their second series of the 2012 season, finishing Opening Week with a 5-2 record.

After allowing a run in the first inning, starter Alex Torres (1-0, 2.89) calmed down and was effective enough to put his team in position to take the rubber game of the series. Despite walking four, the lefty finished the day tossing five innings, allowing only two hits and three runs, while striking out six. He earned his first win of the season as the team remains in first place in the International League South division.

Mangini and the other Bulls supported their starter today, putting up four runs in the bottom the first inning. The first five batters in the Bulls order had hits in their first trip to the plate, while the first four scored runs, to make it 4-1 early. The Knights put up a two spot in the top of the fourth inning, but the Bulls would come back with an insurance run in the bottom of the 7th inning to make it a 5-3 game.

Charlotte attempted a comeback in the top of the 8th inning, scoring a run and pulling within one. But, the Bulls pen did their job, keeping the win intact. Brandon Gomes entered in the 8th and relieved Dane De La Rosa, ultimately picking up his first save of the season.

The first place Bulls depart for the road for the first time this season, a 14-game, four city trip, starting with a game against division rivals the Gwinnett Braves tomorrow. RHP Jhonny Nunez (0-0, 2.70) will make his first start as a Bull tomorrow against RHP Julio Teheran (0-0, 16.20). Game time is set for 7:05pm at Coolray Field in Lawrenceville, GA. The Bulls return back to the DBAP on Friday, April 27th to take of the Indianapolis Indians, the Triple-A affiliate of the Pittsburgh Pirates.