Cameron Seitzer developing a successful career path of his own in Professional Baseball. 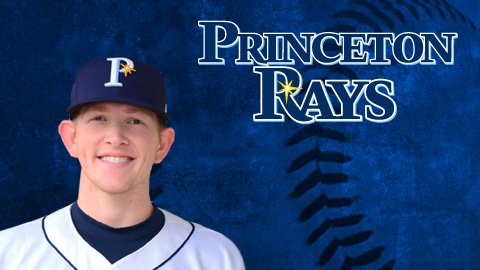 For the vast majority of those fortunate enough to play professional baseball, being able to ask family about what it's like to play in the Majors is not an option.

However, for 2011 Princeton Rays' first baseman Cameron Seitzer, bloodlines run deep, and being able to call upon people in his family tree for professional advice is something he is glad to have at his disposal.

For those unfamiliar with his surname, both Seitzer's uncle and father played pro ball. His dad, Kevin, the current hitting coach of the Kansas City Royals, spent twelve seasons in the "bigs" for the Royals, Brewers, Athletics and Indians before hanging up his cleats in 1997 with career stats showing 74 homers and over 1,500 hits. Being able to spend time in a Major League clubhouse during his childhood has been something Cameron says was invaluable to him from a very young age.

"Having him with all the knowledge he has has been great," Seitzer commented. "He's gotten me ready for my minor league career. He retired when I was seven but I spent a good part of my childhood in a major league clubhouse."

After graduating from Blue Valley West High School in Overland Park, KS, Seitzer decided to take his talents to Norman, OK, and play for the Univesrsity of Oklahoma Sooners.

"I wasn't maturely ready for a pro career out of high school," Seitzer admits. "But playing at O.U. definitely got me ready for where I am now."

Cameron Seitzer spent three years in Norman playing for head coach Sunny Golloway, but nothing there was as memorable as his sophomore campaign in 2010. Seitzer hit .305 with the Sooners that year and finished with a career-high 16 homers. He hit for the cycle against Arkansas Pine Bluff and was a force at the end of the season, homering seven times in the last 24 games of the campaign. The All-Big 12 Honorable Mention player led his team to Omaha, NE that year when the Sooners made the College World Series for the tenth time in school history.

While they didn't go home champions, Seitzer says that the experience is something that is forever memorable. "That's a moment in my life I will never forget," Seitzer said. "It was unbelievable."

Seitzer finished his college career off nicely with a solid junior season at OU, a season in which he hit .358. But scouts have projected him as more of a line drive hitter, with perhaps not enough power to be the prototypical Major League first baseman. This caused Seitzer to slip into the 11th round of the 2011 Amateur Draft, but Cameron says the key for him is to keep the approach he has at the plate.

"The biggest thing for me is sticking with my approach," Seitzer revealed. "Maybe I'm not as powerful as other first baseman, but I'm more concerned with getting on base and helping my team win."

Appearing in 19 of Princeton's first 21 games, Cameron Seitzer has done just that. He sports a .328 batting average (21-for-64) and has reached base at a .442 clip while also adding a trio of homers, 16 RBI and three stolen bases into the mix as well.

While Seitzer's dad has been busy up in Kansas City with the Royals, Cameron has still been able to get support from loved ones. His fiancé, Chelsea, has attended several games at Hunnicutt Field and has been, according to Seitzer, a big part of his success early on in his professional career.

"She's been great," Seitzer said. "She's backed me up 110 percent. She's been supportive since I got to Princeton."

Even in the Appalachian League, the Seitzer ties run thick. His stepbrother, Nick Graffeo, is a pitcher for the Burlington Royals. The two faced off on Opening Day, with Seitzer getting the better of Graffeo for two hits. But Seitzer knows the road to the show is a long one. One Seitzer has had a taste of the big leagues. Cameron hopes that one day he will join his father in the exclusive family that is Major League Baseball.

To get more immediate and breaking information year-round on Princeton Rays Professional Baseball as it occurs, do not forget that the P-Rays are now on Facebook. Be sure to check out our Facebook section on our website at www.princetonrays.net. Don't miss your opportunity to sign up for this free service! ANOTHER FREE OPPORTUNITY for you to keep up with your P-Rays is to follow the team on "Twitter" at www.twitter.com/princetonrays.