On the Road: The Sod Poodles' Anthem 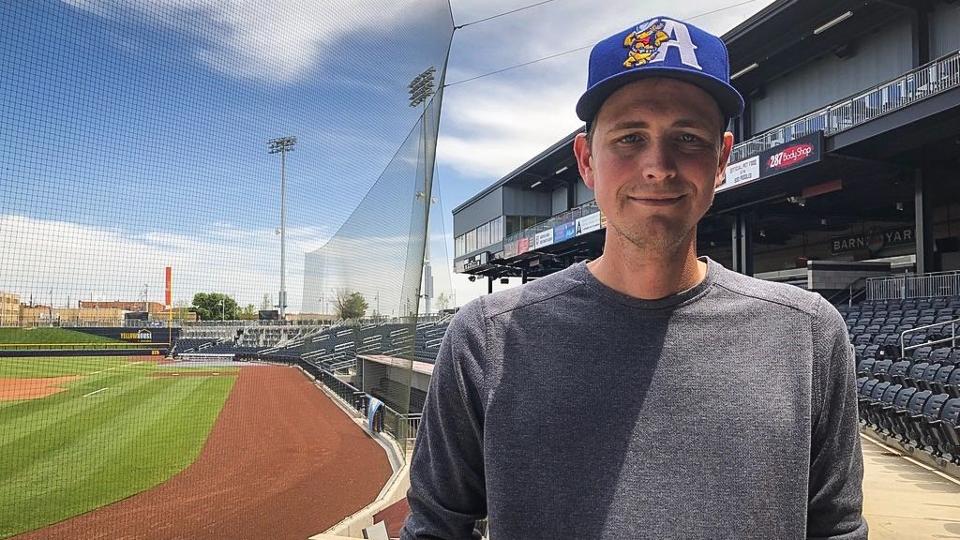 Carson Leverett, author of the "Sod Poodles Anthem," as seen during a mid-day visit to Amarillo's HODGETOWN ballpark.

It's not quite "Amarillo by Morning," but Carson Leverett has written a song that will resonate in the Texas panhandle city for years to come.

Leverett, a bootmaker by trade, is the author of "Sod Poodles Anthem," an unquestionably catchy ode to Amarillo's prairie dog-themed Minor League Baseball team. It debuted in June 2018 via a YouTube video featuring Leverett playing the song in his living room. That video went viral, at least locally, and nine months later "Sod Poodles Anthem" was named the Texas League club's official theme song. If you attend a game at the Sod Poodles' HODGETOWN home, you'll hear Leverett's anthem during the seventh-inning stretch and again if the team wins.

"You might laugh and point and say, 'Oh Lordy, man, their name's insane,'" sings Leverett. "But you won't be laughing when you get beat down."

The cowboy machismo on display in "Sod Poodles Anthem" is firmly tongue-in-cheek, and it's no surprise that in person Leverett comes across as soft-spoken and introspective. He's been writing songs since high school and says his influences include Lightnin' Hopkins, Townes Van Zandt, Guy Clark, Jason Isbell, Steve Goodman (author of "Go Cubs Go") and, above all, John Prine.

"If there's a person I would want to imitate, or emulate, in songwriting and performing, [Prine's] probably the guy I would cite as my No. 1 influence," said Leverett.

Leverett's always been a baseball fan as well. He grew up rooting for the independent league Amarillo Dillas and was an early proponent of the effort to build a Minor League ballpark in downtown Amarillo.

That initiative passed in November 2015, setting in motion a series of events that resulted in the return of Double-A baseball to Amarillo this season after a 37-year absence. Part of that series of events was June 2018's Name the Team contest, during which the franchise announced its five finalists.

"My reaction, which was a common one, was 'Oh boy, here we go,'" said Leverett. "Because I guess we were going to be the Boot Scooters, the Bronc Busters, the Long Haulers, the Jerky or the Sod Poodles. Those names kind of took the wind out of a lot of our sails, because they're so quirky. For me, personally, my immediate reaction was of slight aversion. But after talking to people and doing more research on Minor League team names and how successful some of these quirky initiatives have been, I got on board with the names generally but particularly the name Sod Poodles because it was just so outrageous and fun."

"Over the last couple of years I've become a little more serious about the craft," he said. "Some of the guys who have really encouraged me to be more serious about songwriting in general are the fellas I play with the first Friday of each month. The [team] names came out on a Wednesday and we met on a Friday, so it was kind of a hot-button issue. And everyone was just like, 'Oh man, what are we going to do? We're going to be called the Sod Poodles.' And I was at that point all-in, I love it, and the dobro/pedal steel player Stacy [Scheller] loved it as well. ... He was like, 'Man, you've got to write the Sod Poodles song.'"

The creative process was in motion.

"That Saturday before lunch I had the first two verses and the chorus worked out," Leverett said. "I sent [Stacy] a little private video and he said, 'Oh, you've got to add more stuff.' And that's when I added the third verse that incorporates some of the other teams in the Texas League and kind of wraps it up. ... Sunday, I recorded the video and put it on YouTube. It's in my living room. If you look closely you can see that I'm looking off to the side because I don't know the words to the song yet. I'm reading them off a microphone stand. I knew that it was paramount to get it out quickly if it was going to have any effect on the contest or gain any steam as a song. So I recorded it before I actually knew how to play it."

"Sod Poodles Anthem" received plenty of media attention, during a curious period in Amarillo history in which the Sod Poodles name was becoming a bona fide phenomenon. When Sod Poodles was officially announced as the team's name, in November, it seemed like a foregone conclusion. Leverett, meanwhile, had a new goal: "Let's make this song a part of the team's branding."

After meeting with Sod Poodles president Tony Ensor, Leverett became confident that "Sod Poodles Anthem" could actually become the team's theme song. He therefore took it upon himself to create a studio version, recording trombone, trumpet and pedal steel (courtesy of Stacy Scheller) locally before traveling to Nashville for studio time with session musicians. This was arranged, in part, by Leverett's sister.

"Her name's Danelle Leverett. Her stage name's Nelly Joy," said Leverett. "She's in a band called Gone West -- they're really incredible. ... She helped me book a studio session with some really great musicians. I told them what I was going for, production-wise, and we had all the tracks shaped up in a couple hours. It was a fun process."

"Sod Poodles Anthem" was ballpark-ready, and on March 27, the Sod Poodles announced that it would serve as their official theme song.

"Hopefully, it'll become such a fixture that my kid will get to grow up hearing this song, going to games," said Leverett. "He's one year old right now. His name's Wesley. Now, if Wes could grow up to hear this thing played in the ballpark, then mission totally accomplished with respect to the 'Sod Poodles Anthem.'"