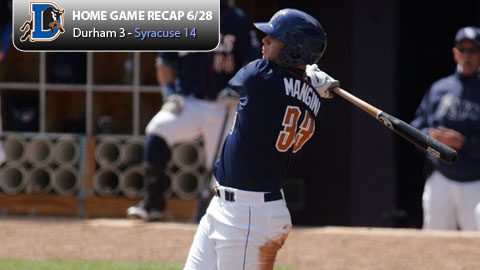 DURHAM, NC - The Syracuse Chiefs crushed the Bulls 14-3 on Thursday night, thanks in part to three four-run innings. In his first start since being named International League Pitcher of the Week, Jim Paduch was ravaged for 11 hits and 10 earned runs in 5 innings of work.

Syracuse got off to a speedy start, scoring a run just two pitches into the game. All-Star Corey Brown led off with a double, followed by an RBI single from Erik Komatsu to quickly put the Bulls in 1-0 hole. The Chiefs sent eight players to the plate in the top of the first and scored four earned runs in the frame.

After a Henry Wrigley 2-run homer in the bottom of the 1st put the Bulls right back in it, Paduch (4-6, 5.31) quickly let the game get away. He was clobbered for four more runs in the third. His defense did not help him out, as Wrigley and Tim Beckham both committed costly errors that extended the inning. In the 4th, Seth Bynum hammered a 3-run home run to right field that all but secured Paduch's sixth loss of the season. Syracuse's shortstop finished the night with 5 RBI, and all but three Chiefs starters drove in at least a run.

Yuneksy Maya (6-5, 3.52) finished the night tossing 6.0 IP, allowing 2 R/ER on 7 H with 2 BB and 5 SO. Jeff Mandel picked up his Cuban teammate, tossing 3.0 innings in the win to earn his first save of the season. The Bulls rallied with three straight hits in the bottom of the eighth to score a run, but it was much too little too late. Brown smashed his 17th HR, a 2-run shot off of Ryan Reid, to reaffirm the Chiefs 14-3 stranglehold.

Durham wraps up its eight game homestand with a USA Baseball and Bulls doubleheader tomorrow at the DBAP. The single admission event will start with Game 1 of the USA Baseball Prospect Classic starting at 3:05pm, followed by the Bulls and Chiefs at 7:05pm. The Chiefs will send LHP Zach Duke (9-3, 3.69) to take on RHP Matt Buschmann (0-0, 3.38) for Durham.