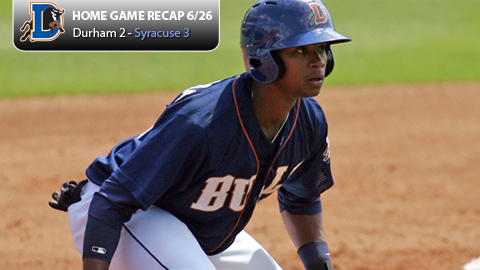 DURHAM, NC - In a battle between the two hottest teams in the International League on Tuesday night, the Syracuse Chiefs proved to be hotter than the Durham Bulls. It took four hours and twelve minutes, but Syracuse ultimately wrapped up a 3-2 victory in 12 innings, securing their ninth win in a row while snapping the Bulls' season-high five game win streak.

Way back in the first inning, Kyle Farnsworth started for Durham in his first Triple-A rehab appearance. The Rays closer made quick work of the Chiefs in the first, allowing a double, but striking out two in his lone inning of work. He finished the game tossing 13 pitches, 10 for strikes, before being lifted for Matt Torra.

The Bulls led for nearly the entire game, thanks to a run in the bottom of the fourth. Chris Gimenez led off with a walk and was followed by back-to-back singles from Brandon Allen and Tim Beckham. Beckham's single up the middle scored Gimenez, giving the Bulls a 1-0 lead. It was the 2008 top overall draft pick's first RBI since coming back from a 50-game suspension.

Torra, the regularly scheduled starter, was dominant in his relief of Farnsworth but could not hold the Bulls small lead. After throwing 93 pitches, it was Torra's 94th pitch that would cost him the win. Corey Brown ripped that pitch for a solo HR into the right field stands to tie the game up at one all. Torra finished the game tossing 6.2 IP and allowing an earned run, walking one and matching a season-high six strikeouts.

Eventually it would take extra-innings to end the series opener. Durham failed to capitalize on a one out walk in the ninth and the game headed to extra frames. It would take until the top of the 11th for the tie to be broken. With Bryan Augenstein on in relief for the Bulls, Syracuse's Mark Teahen would score on an RBI single by Carlos Rivero.

The game looked all but over, but the Bulls regained the lost run in the bottom of the 11th. Jeff Salazar's sacrifice bunt plated Reid Brignac to give Durham hope of extending its streak to 6 wins. But with one out and the winning run on second, Henry Wrigley and Stephen Vogt failed to drive in the decisive run.

After the contest crossed the 4:04 mark, making it the longest game of the season for the Bulls, Syracuse scored to break the tie. With two outs and the bases loaded, Ryan Reid (4-1, 3.23) induced a groundball that went up the middle and off his foot, allowing Brown to score the Chiefs run that would end the Bulls win streak. Durham went in order in the bottom of the 12th inning. Christian Garcia closed the game earning his second save in relief for the winning pitcher Hassan Pena (3-3, 4.46), who took home his third win.