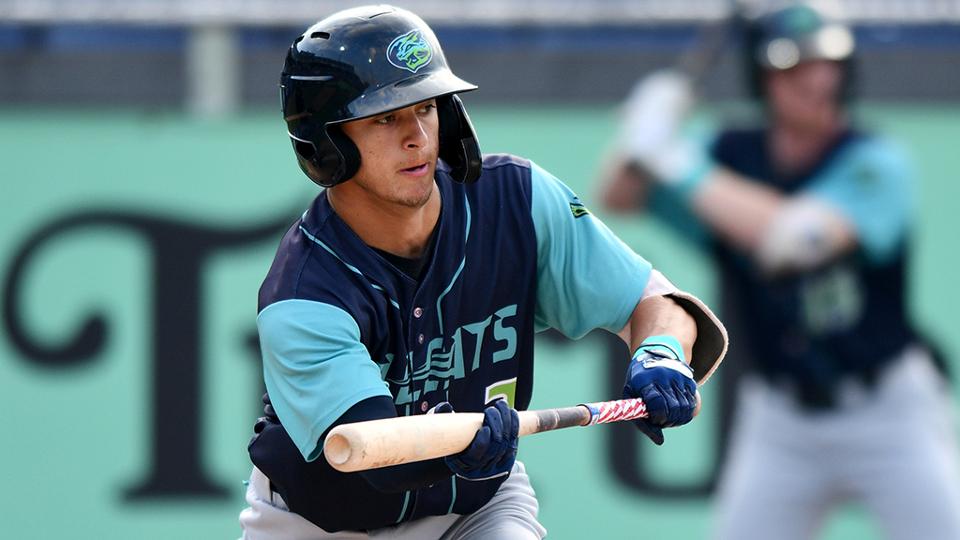 Ranked the No. 3 prospect in the Indians system, Tyler Freeman has a .319 average over 231 Minor League games. (Ken Inness/MiLB.com)

The Indians continue to reap the benefits of a solid farm system and remain in a position to compete in the American League Central Division, thanks in no small part to a Minor League system featuring three of MLB.com's Top-100 prospects. Cleveland's domestic affiliates combined for a .509 winning percentage and three playoff appearances in 2019. Triple-A Columbus and one of the club's two Rookie-level Arizona League teams reached their respective Championship Series before falling short.

The loss of Triston McKenzie to an upper-back strain in Spring Training -- an injury that ultimately cost Cleveland's second-ranked prospect the entire season -- was a significant blow, but the continued maturation of top prospect Nolan Jones and No. 3 Tyler Freeman was a welcome sight for vice president of player development James Harris and the rest of the organization. With no shortage of up-and-coming talent plus a few diamonds in the rough, the Indians look to be in good shape for the foreseeable future.

Catcher -- Eric Haase, Columbus (102 games), Cleveland (10 games): Haase belted a career-high 28 homers and posted a .832 OPS in 102 games for the Clippers to earn a cup of coffee in the Majors for a second straight season. It marked the third straight year the 26-year-old hit 20 or more long balls and the seventh time in nine professional seasons he's reached double digits. In addition to his pop, the Michigan native is solid defensively as both a receiver and a thrower. Haase threw out 41.7 percent of runners attempting to steal during the season and has nailed 35.3 percent in his career.

First baseman -- Bobby Bradley, Columbus (107 games), Cleveland (15 games): The term "slugger" and Bradley have become synonymous at this point and with good reason. Cleveland's No. 7 prospect rebounded from arguably the worst season of his career with quite possibly his best, which included his Major League debut. Despite going yard 27 times between Double-A Akron and Columbus in 2018, Bradley posted a career-low .224. The 23-year-old lifted that number 40 points and added a personal-best 33 long balls and a .912 OPS in 402 at-bats. The Indians' third-round pick in 2014 has hit at least 23 roundtrippers in five consecutive seasons.

"One of the biggest things in our eyes was Bobby's ability to play first base," Harris said. "The last thing we want from him is to show that power but not have a position. When that happens, it's a detriment to the player and to the manager in the Majors, who's hamstrung. He's worked really hard to keep that position his, and it was nice to see him get up to the bigs for the first time. His opportunities were limited last year because of Franmil Reyes and Carlos Santana, but we're looking forward to what 2020 will bring."

Second baseman -- Jose Fermin, Lake County (105 games): Fermin proved to be a steady offensive force thanks to his ability to make contact and work the count. Both are big factors for any strong hitter, but especially impressive for a 20-year-old playing in his first full season. Fermin batted .293/.374/.379, scored 75 times and stole 28 bases in 105 games for the Captains. The native of the Dominican Republic amassed only 20 extra-base hits in 393 at-bats, but his batting average on balls in play (BABIP) registered .311, a solid figure that carried extra weight alongside his .293 average.

Third baseman -- Nolan Jones, Lynchburg (77 games), Akron (49 games): Although Oct. 24 thumb surgery ended his Arizona Fall League campaign a little early, Jones' year was a success. Cleveland's top prospect parlayed a strong start in the Class A Advanced Carolina League into a promotion to Double-A barely two months after his 21st birthday. A former hockey player in his native Pennsylvania, Jones broke out with 19 homers and an .871 OPS in 2018 between Class A Lake County and Lynchburg. Using an advanced approach at the plate that produced 96 walks -- the second-highest total in the Minors -- and an ability to hit to all fields, the former shortstop finished with a .272/.409/.442 slash line, 40 extra-base hits, 81 runs and 63 RBIs in 126 games.

"What's not to like about Nolan? As soon as he gets off the bus, you say to yourself, 'That's what a Major Leaguer looks like," Harris said. "He's starting to look very natural at third, and that's a testament to his work ethic. Offensively, the power is already there and his approach belies his young age. He's got the tools to be the total package, so needless to say, we're very excited to see him develop."

Shortstop -- Tyler Freeman, Lynchburg (62 games), Lake County (61 games): Freeman has jumped into the Top-100 Prospect list on the strength of a tremendous bat and an equally impressive glove. The 71st overall pick in the 2017 Draft enjoyed a strong debut before taking the Class A Short Season New York-Penn League by storm a year later. Freeman led the circuit in batting (.352), runs (49), hits (95), doubles (29), extra-base hits (35) and total bases (138) and carried that over into his first full-season campaign in 2019.

This season, the 20-year-old batted .306/.378/.410 with 40 extra-base hits, 89 runs and 19 stolen bases in 123 games between Lake County and Lynchburg. Defensively, Freeman compiled a .962 fielding percentage and a 4.28 range factor in 114 games at short, particularly impressive at a demanding position for young players.

"Tyler has that knack for putting the bat on the ball consistently," Harris said. "We are constantly looking for opportunities to challenge him, and that's one of the reasons we've moved him [through the system] so quickly. He hasn't missed a beat. He's so impressive in the batter's box that it overshadows his defense, which is pretty darn good. Shortstops who are as good on both sides of the ball aren't easy to come by, and that's where we see him moving forward."

Daniel Johnson, Columbus (84 games), Akron (39 games): Acquired from the Nationals last November in the trade for All-Star catcher Yan Gomes, Johnson had little trouble adjusting to a new organization. The 24-year-old bounced back from an injury-plagued year in 2018 with an All-Star-caliber season that included a spot in the Futures Game. Johnson held his own with Akron before taking off after his promotion to Columbus, where he batted over .300. The No. 16 Indians prospect finished with an overall slash line of .290/.361/.507 in 123 games. Johnson collected a career-high 60 extra-base hits, drove in 77 runs and scored 76 times -- figures that were in line with 2017, when the New Mexico State product was named Nationals Minor League Player of the Year.

"We started Daniel in Double-A, but he quickly proved to us that was a mistake," Harris said. "What was great to see from him was his ability to adjust to pitchers who had a plan against him. When you get up to the higher levels, pitchers are going after hitters' weaknesses as opposed to simply getting the ball over the plate. At this point, it's all about polishing his game. He's got a nice future ahead of him."

Ka'ai Tom, Akron (81 games), Columbus (51 games): Everything fell into place for Tom in 2019. After a pair of solid but unspectacular seasons, the 25-year-old erupted with Akron and Columbus. The native of Honolulu was hot from beginning to end and finished with career highs across the board. Tom batted .290/.380/.532 with 60 extra-base hits, 86 RBIs and 83 runs scored in 132 games to give Cleveland another viable option to call upon in 2020.

Brandon Barnes, Columbus (94 games): The 33-year-old veteran didn't finish the year with Cleveland, but his performance more than merited a spot on this list for a second straight year. Barnes hit .271 with a .865 OPS, 24 homers and 77 RBIs with the Clippers to earn a spot on his second consecutive International League All-Star team. The California native was traded to the Twins on Aug. 2.

Designated hitter -- Will Benson, Lake County (62 games), Lynchburg (61 games): Outstanding performances by Johnson, Tom and Barnes were the only reasons why Benson was bumped to the DH category here. Standing 6-foot-5 and 225 pounds, the No. 18 Indians prospect put together his second straight 20-homer season, highlighted by a four-homer, eight-RBI performance for Lake County on April 18. Benson struggled after his promotion to Lynchburg, although bad luck -- a .255 BABIP in 217 at-bats -- probably played a factor into that. Overall, it was another step in the right direction for the 21-year-old, who matched his 22 roundtrippers from a year earlier while increasing his RBI total by 20 to 78 and his extra-base hits from 34 to 48.

"We had Will start back in the Midwest League to challenge him," Harris said. "Everyone knew who he was -- a first-round pick who is a monster at the plate. The power is obvious, but his approach and pitch selection improved greatly compared to a year earlier. We kept working on him with his swing, and seeing those results gave us the confidence to move him up to the Carolina League."

Right-handed starter -- Eli Morgan, Akron (19 games, 18 starts), Lynchburg (six starts), Columbus (one start): Injuries and inconsistency from several of Cleveland's more heralded pitching prospects allowed Morgan to steal a share of the spotlight in 2019. The 23-year-old produced a carbon copy of the previous year, when he started a career-high 27 times. The Gonzaga product went 9-6 with a 3.39 ERA, a 1.17 WHIP and a 146-to-40 strikeout-to-walk ratio in 140 2/3 innings. Morgan didn't surrender more than two runs in 14 of his 25 starts, including 12 of his first 15.

Left-handed starter -- Matt Turner, Lake County (nine starts), Mahoning Valley (six starts): Only 20 years old and playing outside of the Arizona League for the first time, Turner blossomed into an intriguing prospect in 2019. The 6-foot-4, 180-pounder missed fewer bats than he did in his first two seasons. The 2017 11th-round pick fanned 52 in 73 2/3 innings while limiting opposing hitters to a .241 average last year. His 2.81 ERA and 1.19 WHIP were impressive, but the Miami native will be looking to increase his strikeouts or hope for continued success -- and luck -- when opponents put the ball in play.

Relief pitcher -- James Karinchak, Columbus (17 games), Akron (10 games), Cleveland (five games), Arizona League (three games): There are strikeout pitchers and then there is Karinchak, who gave new meaning to the term. The 24-year-old has consistently been one of the hardest pitchers to hit in the Minors, but his 2019 totals reached another level. Featuring a fastball in the upper-90s and an equally lethal curveball, Karinchak struck out 74 batters in 30 1/3 frames, an average of 22 K's per nine. Opponents hit .150 against the No. 21 Indians prospect, who whiffed 59.2 percent of opposing hitters while posting a 2.67 ERA.

Video: Columbus' Karinchak with the K

"The thing people keep saying about James is, 'Well, he can't do that here,' and then he keeps doing it no matter what level he's at," Harris said. "You need great stuff to succeed the way he has, but his demeanor on the mound plays a huge part. You can see it in his face and how he approaches each hitter. He's just a dominant pitcher."