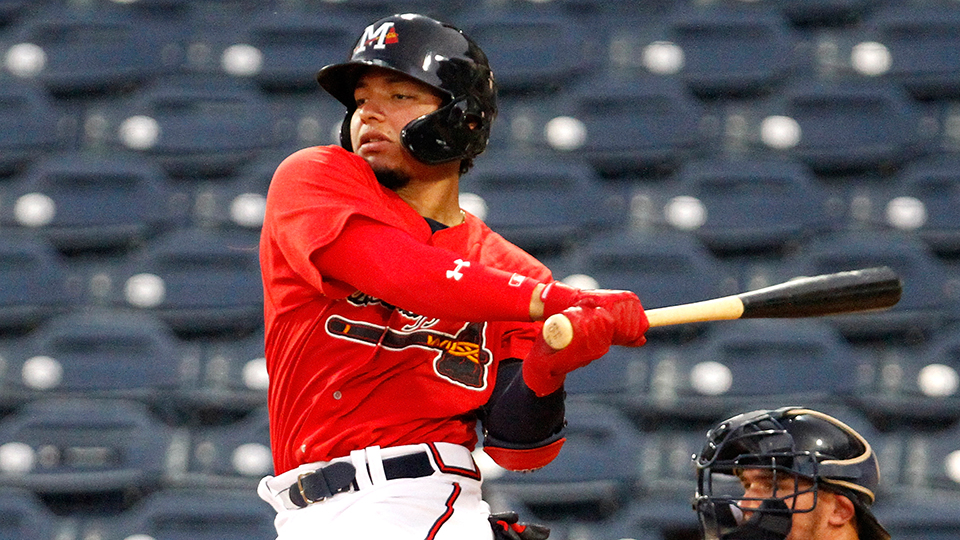 William Contreras is 8-for-14 with five RBIs and five runs scored in his last four games. (Ed Gardner/MiLB.com)

Double-A Mississippi relied on two of its biggest bats -- and one of its vaunted arms -- on Sunday.

"They both had big games," Braves manager Chris Maloney said.

Contreras went 4-for-5 with a sixth-inning single that plated Waters and a two-run knock in the seventh that capped the scoring. The four hits matched his season high and were his highest total since the 21-year-old was promoted from Class A Advanced Florida on June 5.

"It took him a little bit, but hopefully, he's turned the corner and gets comfortable," Maloney said. "He's a heck of a talent. The guy's got a live body, he can throw, he's been improving his catching, his game-calling. And there's thunder in his bat."

Maloney said it's tough making the jump from the Florida State League, but Contreras is up to a .256 average in July after hitting .192 last month for Mississippi.

"These pitchers are more advanced, but he's gonna get it," Maloney said. "He's gonna be a heck of a player for us."

Waters, MLB.com's No. 43 overall prospect, was 3-for-5 with a double and two runs scored. He delivered an RBI single in the third off starter and Twins No. 18 prospect Jorge Alcala.

"He was down behind in the count and it was a tough AB," Maloney said.

It was his second straight multi-hit game and raised his Southern League-leading batting average to .338. He also tops the circuit with 132 hits, 46 extra-base hits, 32 doubles, nine triples, 192 total bases and 59 runs scored.

"Drew's just a good hitter," Maloney said. "He's got a good idea of what he wants to do up there. He works hard and he's just a special talent."

Joey Wentz (5-7), Atlanta's ninth-ranked prospect, worked a career-high eight innings and allowed three runs on five hits and a walk. He struck out five and lowered his ERA to 4.26 in 19 starts.

"As long as they've got some bullets left in the gun as far as pitch count, you let them go out there and try to get out of tough spots. That's how you learn how to improve as a pitcher and become a better pitcher," Maloney said.

The manager also said it was satisfying watching his team rack up a season-high 18 hits.

"You just run them out there and let them play and they're going to figure things out," he said. "And the cream's gonna rise to the top."