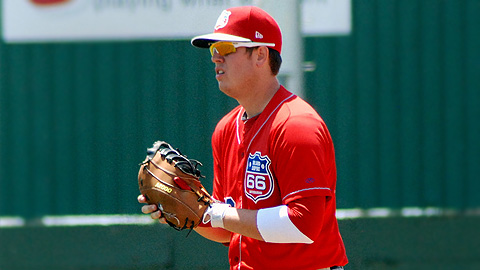 Baseball's fastest man and the Angels' top prospect were among those honored by the California League on Wednesday when the circuit's postseason All-Star roster was revealed.

Reds shortstop Billy Hamilton earned Most Valuable Player honors for his huge season with Class A Advanced Bakersfield, while C.J. Cron's monster year with Inland Empire netted him Rookie of the Year status. Modesto's Christian Bergman was named the league's Pitcher of the Year -- he was one of four pitchers selected to the team.

Hamilton managed to top his impressive 2011 campaign by stealing 154 bases (as of Aug. 29), shattering professional baseball's all-time single-season record of 145 set by Vince Coleman in 1983. Hamilton swiped 103 of his bases with the Blaze while hitting .323 with a homer, 30 RBIs and a .413 on-base percentage in 82 games before earning a promotion to Double-A Pensacola.

Cron, the Angels' first-round pick in 2011, skipped the Class A level and feasted on Cal League pitching in his first full season, hitting .293 with 27 homers and a league-leading 123 RBIs in 129 games.

Bergman leads the circuit and all of the Minors with 15 wins and owns a 3.68 ERA -- fourth best in the Cal League -- in 26 starts for the Rockies affiliate. He's also second in innings pitched (156 2/3), and fourth in WHIP (1.21). The Altadena, Calif., native was also named as Cal League Pitcher of the Week two times this season.

The full roster and field staff is below: