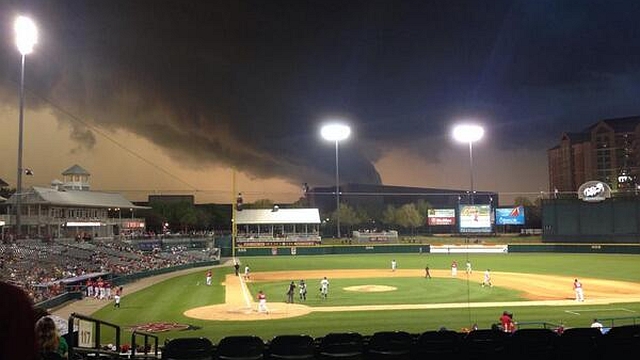 The Minor League Baseball season began Thursday, kicking off another five-month odyssey of weird, wacky and wholly improbable on-field moments. And when such moments occur, rest assured that they will be chronicled in Crooked Numbers.

Now entering its sixth season, Crooked Numbers will appear on a monthly basis throughout the 2014 campaign. Consider this special Opening Day edition an appetizer of absurdity to prepare your palette for the full-course madness to come.

When the awkward food metaphors end, the Crookedness begins. Let's get to it!

Traveling 'round the basepaths: The Arkansas Travelers visited the Midland RockHounds to start the season, amid winds traveling upwards of 40 mph. The Travs took full advantage of these blustery conditions, pounding out 22 hits en route to a 20-7 victory. The 22 hits were the most logged by Arkansas since July 22, 2010, when they smacked 23 hits and still managed to lose to Northwest Arkansas, 19-12.

Take cover: The conditions at Midland were downright tropical compared to what was experienced in Frisco that same evening, as Thursday's game between the RoughRiders and visiting Northwest Arkansas was postponed due to a so-called "tornadic supercell."

Cats and dogs: The El Paso Chihuahuas played their first-ever game on Thursday in Reno, which coincided with 2014's first animal-on-the-field sighting. Reports El Paso broadcaster Tim Hagerty, "The game ... had an unexpected site in the eighth inning, when a gray cat ran onto the field."

As easy as...: One of Hagerty's Pacific Coast League broadcasting colleagues is Alex Freedman of the Oklahoma RedHawks, who has long been a reliable fount of Crooked Numbers ephemera. It sure didn't take long for Freeman to get in touch with a 2014 tidbit, as Thursday's game between the RedHawks and Round Rock Express featured a rare 1-2-3 putout. Round Rock's Brett Nicholas hit a comebacker that hit pitcher Rudy Owens; catcher Max Stassi picked up the ball and threw to first baseman Jon Singleton for the out.

Three the hard way: Congrats to those who chose 1-6-3-2 in their "first triple play of the Minor League season" pool. The obscure pitcher-to-shortstop-to-first baseman-to-catcher combo was pulled off by the Lexington Legends on Sunday, marking the first time in franchise history that the team had turned a triple play.

The name game: The Colorado Springs Sky Sox and New Orleans Zephyrs faced off on Opening Day, with Christian Friedrich taking the mound for Colorado Springs and Brian Flynn doing the same for New Orleans. On Friday, it was another Christian vs. Brian matchup -- Christian Bergman toed the slab for the Sky Sox, opposing Bryan Evans of the Zephyrs.

Brain freeze: On Saturday the Bowie Baysox eked out a 5-4 win over the Harrisburg Senators, thanks to a walk-off single by Buck Britton. That's what it says in the box score, at least, but according to local newspaper accounts the Baysox victory was made possible because no one covered first base after Britton hit a ground ball that was fielded by Senators second baseman Cutter Dykstra.

Picking up where they left off: The Salem Red Sox are on a roll, as this @MiLB tweet aptly explains:

It ain't over: Victory seemed secure for the Las Vegas 51s on Saturday, as they entered the ninth inning with a 6-1 lead over the Fresno Grizzlies. However, Fresno managed to score seven runs in the frame -- all with two outs -- en route to an improbable 8-6 victory. Making this Grizzlies comeback even more improbable was the fact that they didn't manage an extra-base hit in the frame, scoring seven runs via six singles and three walks.

Benjamin Hill is a reporter for MiLB.com and writes Ben's Biz Blog. Follow Ben on Twitter @bensbiz. Josh Jackson and Daren Smith contributed to this report. This story was not subject to the approval of the National Association of Professional Baseball Leagues or its clubs.