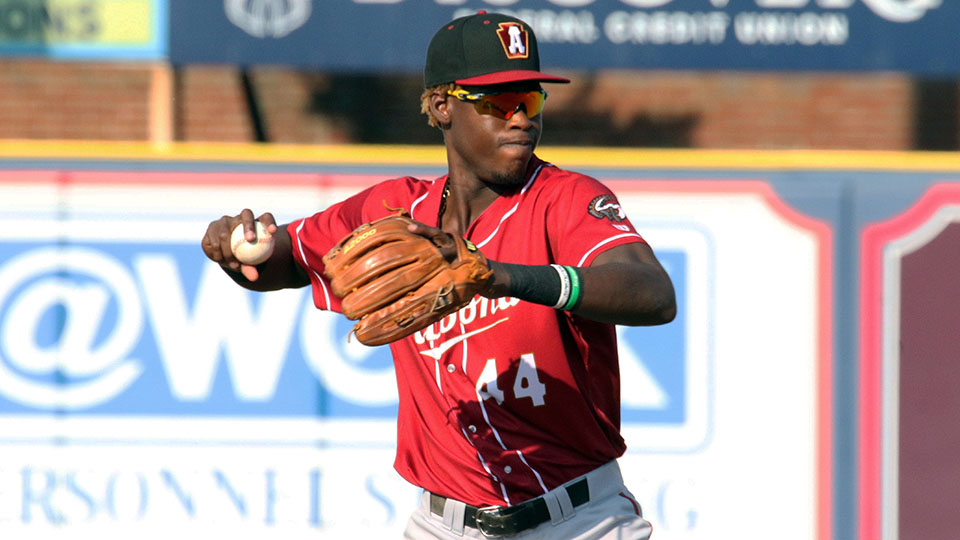 Oneil Cruz is 6-for-9 in his last two games to raise his Eastern League batting average 80 points to .294. (Altoona Curve)

Double-A Altoona manager Michael Ryan dubbed Oneil Cruz "everything as advertised," since he joined the club two weeks ago. Still, he acknowledged, even the most talented players experience an adjustment period when making the jump to a new Minor League level, and that he was encouraged by how much more comfortable the 20-year-old is getting every day.

Cruz appeared to be right at home on Tuesday.

The third-ranked Pirates prospect turned in his first four-hit performance of the season, collecting another triple, scoring twice and driving in a run, but Double-A Altoona was outslugged by Harrisburg, 13-10, at FNB Field. The clubs combined for 33 hits.

"He's a five-tool guy and you see it right away," Ryan said. "The barrel control, when he hits it it comes off so hard. He's an unbelievable athlete, he has a cannon for an arm, he can really run, he's got size and strength. He's a lot of fun to watch each night.

"I think when he first got here he had a little issue with the speed of the game. The mind-set has to come around where he has to be able to focus on every single pitch for three hours or however long the game goes. Figure out what the pitcher is trying to do to you, or defensively realize who's at the plate and how do you attack the ball properly. It's a lot, but it's going to make him even that much ... better of a player."

Tuesday provided a glimpse of that.

"That's a learning situation for him," Ryan said. "He gets caught, but when he gets back to the dugout we talk about: 'What did you see there? What makes it a better opportunity to go next time?' Try to explain things so that he understands situations better. 'Maybe try it this way next time.' It's all part of the learning curve."

In the fifth, the 20-year-old legged out an infield single off left-hander Jordan Mills. Two innings later, he laced a shot to the gap in right-center against righty Andrew Lee that plated Chris Sharpe for his third triple since joining the Curve on July 30. Cruz scampered home three pitches later when Logan Hill hit a slow roller to third for an RBI groundout.

"That ball was not a triple off the bat, but he turned it into one," Ryan said. "That was a ball down in the zone and he barreled it into the gap. He got out of the box great, made great turns at first and second, and that allowed him to get the triple. It was a great play."

The native of the Dominican Republic fell behind, 0-2, against righty Aaron Barrett in the ninth before punching a base hit through the right side of the infield. He came home on Hill's eighth dinger of the year.

"He was a lot more aggressive tonight than he had been previously since he's been here," Ryan said. "He was able to lay off the low off-speed stuff, and when he got a fastball he didn't miss it. Whenever he got to two strikes he shortened his swing, and still with his skillset he could barrel it up and find holes."

Cruz posted a trio of four-hit games last year with Class A West Virginia -- the first on May 10, 2018 at Hagerstown, where he went 4-for-6 with three doubles. The next came on June 16 against Delmarva when he finished 4-for-5 with a pair of triples, a double and three RBIs. Two weeks later, he was 4-for-6 at Hagerstown with a double, two RBIs and two runs scored.

MLB.com's No. 62 overall prospect opened the season with Class A Advanced Bradenton, but landed on the injured list on April 28 after suffering a right foot fracture. Cruz completed a three-game rehab assignment in the Rookie-level Gulf Coast League and returned to the Marauders on June 30. After posting a .301/.345/.515 slash line with an .860 OPS in 35 Florida State League games, he was promoted to Altoona.

Dante Bichette notched four hits, drove in three runs and scored twice for the Senators with a pair of triples. Nats No. 18 prospect Tres Barrera and Adrian Sanchez drove in two runs apiece.