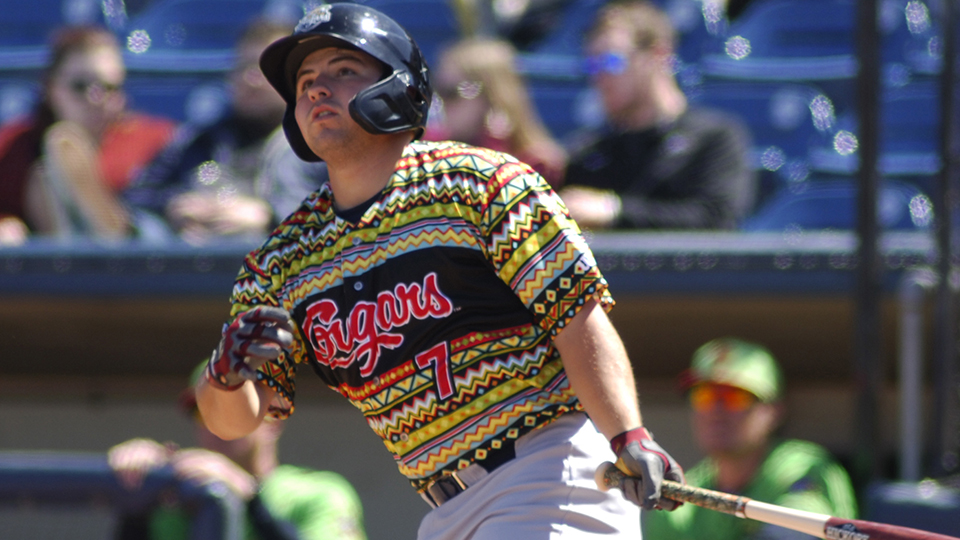 Buddy Kennedy is batting .256 with five homers and 31 RBIs in 61 games with Kane County. (Lianna Holub/MiLB.com)

When Buddy Kennedy was 10 years old, his grandfather, former Major Leaguer Don Money, took him to the Milwaukee Brewers clubhouse when the team was in Philadelphia for playoff action.

Money was a coach with the Brewers and introduced Kennedy to stars like Prince Fielder and CC Sabathia.

But it was a trip to Helena, Montana, five years later that made more of an impact on Kennedy. Far from the luxuries of a Major League clubhouse, Kennedy learned a lasting lesson.

"My grandfather took me to Helena, Montana, where the Brewers had a Rookie team at the time," said Kennedy. "He showed me what it was like to be a Minor Leaguer.

"I was fortunate to understand that the plush leather couches are nice, but you have to go through the grind to get there. I was lucky to see that at that age, because I knew what to look forward to and what to do to prepare myself."

Kennedy, a right-handed-hitting third baseman for the Kane County Cougars, is putting the lessons of Helena to use as he works to climb the ladder in the Arizona Diamondbacks organization.

Whether it was taking ground balls or batting practice, Money made sure his grandson didn't get any preferential treatment in Helena.

"I did what a Minor Leaguer did," Kennedy said. "It matured me a lot as a player, to understand what we go through every day."

Kennedy also has another resource to help him understand the game -- Angels' superstar Mike Trout.

"It's one thing to have conversations with your peers, but at this level, you have guys who are all going through the same thing, learning to deal with failure for the first time," Kane County manager Vince Harrison said. "When you have guys who have been through it, who understand what it takes to move up in this game, that's an invaluable asset."

Kennedy was 12 when he met Trout in New Jersey. They trained at the same location. Trout, who had just been drafted, made a point of encouraging Kennedy. Soon, they started training together. Kennedy attended the same high school that Trout did, and wore his number.

When Kennedy was drafted in the fifth round in 2017, Trout also helped make sure Kennedy entered pro ball with his eyes wide open.

"In the offseason, we train together, hunt together," Kennedy said. "He's a good dude. He really helps me out with anything.

"I can talk to him about aspects of hitting. He's the greatest player in baseball. He says, keep it simple -- look fastball, react to curveball. Having him as a friend, as a baseball resource … I'm very thankful for that."

Kennedy got off to a late start in 2019. He suffered a broken finger in Spring Training and missed more than a month. The 6-foot-1, 190-pounder is hitting .256 with 13 doubles, two triples, five homers and 31 RBIs this season.

"What you have in Buddy is a guy who competes," Harrison said. "He plays hard, and he can hit. He has the ability to square some balls up. His nickname around here is 'Buddy Barrels,' because he can barrel some balls up."

Kennedy is applying his lessons learned to deal with the grind of his first full pro season.

"I try to keep the same mentality throughout the season and go about my business the same way every day, and try to have some fun," Kennedy said. "Everyone knows, it's a long season. I don't want to stress myself out or drain myself. I have to know myself, how many reps to take and all that.

"You have to have a positive mind-set. Every day, everyone wants to get two or three hits. Some days, you're going to go 0-for. You can't beat yourself up about that. You don't know. You might go 5-for-5 the next game. You need to have a good time. You're living your dream, playing baseball. A lot of people don't get to do that. It takes toughness, because some days, you're really tired, but it all comes down to the mental game. If you have a strong mental game, it will get you through the day and help you through the season."

Tough times: Peoria is suffering one of its toughest stretches in franchise history. The Chiefs have lost 19 of 21 games heading into the third week of July. The tailspin includes an 11-game losing streak that was one game short of the franchise record set in 1999.

Hot streak: Dayton's Pabel Manzanero has been off to a dominant start in the second half of the Midwest League season. The 23-year-old catcher is hitting .422 (19-for-45) in his last 11 games. Since the Midwest League All-Star break, Manzanero is first in the league in extra-base hits (14) and doubles (10). His is second in slugging percentage (.580) and third in RBIs (15).