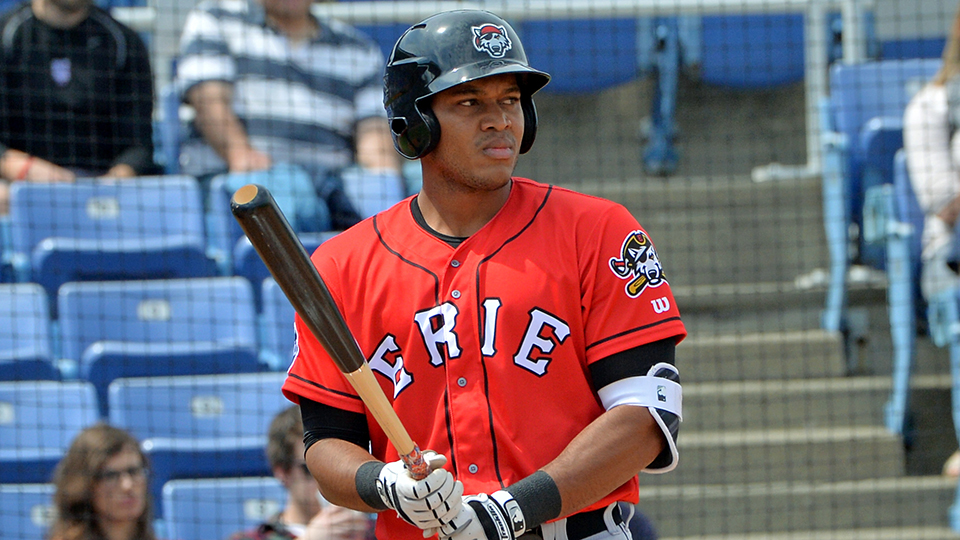 Gabriel Quintana supplied the big blow three times when Double-A Erie needed a charge. But the 24-year-old didn't have the chance when his team could have used him one more time.

Quintana smacked three home runs and matched career highs with four hits and six RBIs, but the Harrisburg Senators rallied to stun the SeaWolves, 14-13, on Monday night at UPMC Park.

Nationals No. 25 prospect Jose Marmolejos popped a two-out grand slam in the ninth inning that put Harrisburg on top in a back-and-forth affair that featured 34 hits, eight home runs and five lead changes. Quintana was responsible for three of those during the first three-homer game of his career.

"He was pretty locked in. If you know Gabriel, you know he's a guy that has some enormous power," Erie hitting coach Phil Clark said. "The biggest thing for him is working behind the ball, patience and letting it come to him. He put all of that together tonight.

"For me, the most impressive thing was that two of the homers came on off-speed pitches. That's something that he's been working on, staying on his legs and seeing it well. Any time he hit the ball tonight, he put us ahead and put us in position to win the ballgame. He definitely clutched up for us tonight, despite the outcome."

After Alec Keller's leadoff blast highlighted a three-run first for the Senators, Erie immediately answered back. Stewart launched a two-run shot -- his team-leading 13th of the year. Dominic Ficociello singled and Quintana gave the SeaWolves the lead with a two-run homer to left field.

Osvaldo Abreu's shot highlighted a two-run second for Harrisburg but Detroit's No. 7 prospect Mike Gerber singled and Stewart walked in the third to set the table. Quintana jacked his second dinger to left-center for a 7-6 lead and his sixth career multi-homer game. The slugging third baseman answered again to lead off the fifth with another shot to left-center. His six RBIs equaled the career high set on Aug. 23 with Double-A San Antonio in the Padres' organization.

It was the first three-homer game for the SeaWolves since ninth-ranked Tigers prospect JaCoby Jones parked three on Aug. 2, 2015 against New Britain.

"You don't want to intentionally hit homers," Clark said of Quintana. "He's a talented player power-wise, because he doesn't need to try or reach for it. He just needs to put a good swing on it. He's a strong and talented kid. He just needs to get the bat on the ball and his power takes off. We talk about exit [velocity] nowadays, he's got some natural ability to put up some pretty high figures when he connects."

The Dominican Republic native's double to left in the sixth gave him four hits for the first time since June 19, 2014 with Class A Advanced Lake Elsinore. Quintana settled for his sixth career four-hit game when he grounded out in the eighth.

Stewart also doubled and drove in three runs for the SeaWolves, giving him 12 RBIs in his last nine games. Tigers No. 27 prospect Grayson Greiner singled three times and drove in Quintana in the sixth. 2017 Minor League milestones

Marmolejos, who is on a rehab assignment after missing the first six weeks with a strained left forearm, doubled and singled three times before his ninth-inning heroics. After going without an RBI in his first five games, the 24-year-old has plated 10 runs in his last four.

The five hits and five RBIs matched career bests for Marmolejos, who drove in five for Class A Hagerstown on Aug. 16, 2015. He collected five hits on July 1, 2010 in the Rookie-level Dominican Summer League.

Nationals 12th-ranked prospect Drew Ward had three hits and three RBIs for the Senators, who tallied a season-high 18 hits.

Michael Avallone is a contributor to MiLB.com. Followhim on Twitter @MavalloneMiLB. This story was not subject to the approval of the National Association of Professional Baseball Leagues or its clubs.