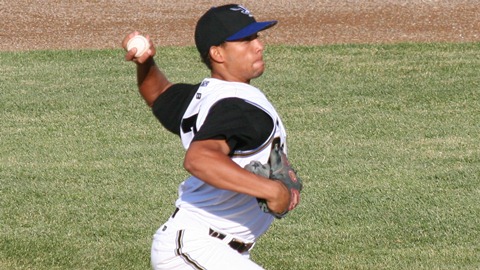 There will be a dozen former Missoula Osprey players who will appear on an Opening Day roster in the Major Leagues in 2012, including five with the parent club, the Arizona Diamondbacks. All 12 players have prior Major League Baseball experience.

The D-backs, who will open Friday, have the same five former Osprey who were on their postseason roster during the 2011 playoffs. Returning to the National League West Division champions are first baseman Paul Goldschmidt (2009 Osprey) and Lyle Overbay (1999), outfielder Gerardo Parra (2006), pitcher Bryan Shaw (2008) and catcher Miguel Montero (2002-03).

Many of the players had big seasons in 2012 - Parra led the team in batting and won a Gold Glove for his defensive work in left field. Shaw started the season at Double-A and was promoted to Reno, then found himself in a D-backs uniform and proved to be a table-setter for the bullpen, becoming the pitcher to go to in the later innings to help the staff get to the eighth and ninth innings. Montero had a career season, while Overbay found new life after a rough run with the Pittsburgh Pirates, hitting .283 down the stretch in a platoon role with Goldschmidt.

Goldy, meanwhile, showed the promise of a power hitter in his first two months in the Major Leagues. The first baseman has been named a league MVP the past two seasons - 2010 in the California League, and 2011 in the Southern League - despite missing the last month of the season after being promoted from Double-A Mobile to the D-backs.

Sergio Santos (2002) also had a breakout season, becoming the closer for the Chicago White Sox in 2011. Now in his third season as a full-time pitcher, Santos is also wearing a different uniform, being traded to the Toronto Blue Jays during the off-season, where he enters the season as the team's closer.

The Detroit Tigers have two former Osprey back in their bullpen - closer Jose Valverde (2000), who picked up the win in the Tigers' opener on Thursday, after his streak of converting 51 straight save chances was snapped, and Daniel Schlereth (2008), a left-hander who will serve as one of the setup men for Valverde.

Carlos Gonzalez (2003) will be one of two former Osprey players who will play for the Colorado Rockies again this season. The other is left-handed pitcher Jorge De La Rosa (1999), who is still recovering from Tommy John surgery, and is not expected to be ready until closer to the midway point this season.

Speaking of left-handed pitchers, the Oakland A's liked what they saw in reliever Jordan Norberto (2006), who earned a spot on their 25-man Opening Day roster and will be coming out of the bullpen. Norberto made his Major League debut with the D-backs in 2010, and split time between the D-backs and A's organizations last season.

Also earning an Opening Day roster spot for a Major League team is veteran outfielder Scott Hairston (2001), who is back with the New York Mets. Hairston is in his second season with the Mets, mostly used as a reserve outfielder. Coming off the bench in the Mets opener on Thursday, Hairston nailed a pinch-hit single in a 1-0 win over the Atlanta Braves.

The 2012 version of the Osprey will open the season with a four-game series that begins on June 18 in Billings, followed by their home opener on June 22 against the defending Pioneer League champion Great Falls Voyagers. Season tickets are available at the MSO Hub Box Office. For more information and a complete schedule, contact the Osprey at (406) 543-3300, stop by the MSO Hub Box Office at 140 N. Higgins, or visit the Osprey online at www.missoulaosprey.com.