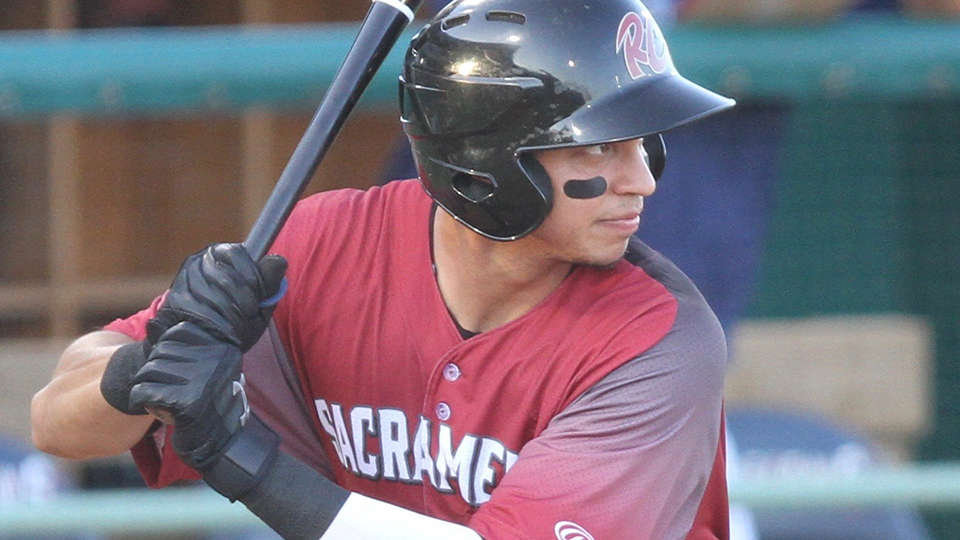 Mauricio Dubon hadn't recorded a four-hit game since he was a member of the Brewers organization. The 25-year-old infielder broke out for his new club in a big way Sunday.

Leading off for the River Cats for the second time in his 17 games with the club, Dubon deposited a 2-2 offering from Braden Shipley into right field. It was his fifth hit in the leadoff spot with the River Cats.

"I like it," the 25-year-old said of hitting from the top spot in the order. "I get more at-bats and more chances to get hits. I like batting leadoff or second. But wherever they put me, I'll be happy to hit."

After popping out to shortstop in the third and striking out in the fifth, Dubon tagged Justin Donatella for a solo tater over the left-field fence. His 18th long ball of the season cane on the first pitch he saw from the right-hander to begin the seventh frame and extended the Sacramento lead to 3-1.

"It's funny. I was hitting off-speed," he said. "They didn't want to throw the fastball. I had to adjust on what they were throwing and decided to hit the off-speed."

Dubon ripped a single into right in the eighth and lined an RBI single to left in the ninth.

"You know hitting is contagious," he said of the River Cats, who racked up 13 hits. "We started off good and finished well."

Boston's 26th-round pick in the 2013 Draft credited former coaches for telling him to never give away at-bats.

"Whenever you get the chance to rack up the hits ... at the end of the season they are going to count," Dubon said. "Don't lose focus and keep racking up those hits. I try to catch everything in front and drive the baseball hard, no matter where it's going."

Prior to his biggest night in some time, Dubon said he wasn't getting the results he wanted at the plate. Nevertheless, he ranks fourth in the Pacific Coast League with 139 hits.

"I mean, I've been feeling good at the plate, but I've been hitting line drives at people," he said. "I wasn't lucky enough. Today, I was lucky. I was putting the barrel on the ball and finding holes.

"I haven't changed [anything]. These guys have trusted me enough. They know what I'm doing. I've just been me. I know how to hit, I know when I'm going good or bad and what works for me."

At the July 31 Trade Deadline, Dubon was traded from the Brewers to the Giants in exchange for pitchers Drew Pomeranz and Ray Black. The shortstop joined his new organization with some experience in The Show.

On July 7, becoming the third Honduras-born player to debut in the Major Leagues, the first since Chito Martinez in 1991. Dubon went 0-for-2 with a strikeout before he was optioned back to Triple-A Omaha.

"I know I can play there," the 25-year-old said on what he learned during the brief stint. "It's the same baseball I've played at all levels. They talked about my pitch selection. I've been working on that forever. I'm getting my pitches to hit and I'm hitting them."

"Baseball is baseball," he said. "You are going to have your good days and your bad days. But the guys are great. I love the organization and I'm happy to be here."

Justin Haley (1-1) allowed a run on four hits and a walk with three strikeouts over six innings to pick up the win.