Chihuahuas food and drink draws from influences near and far 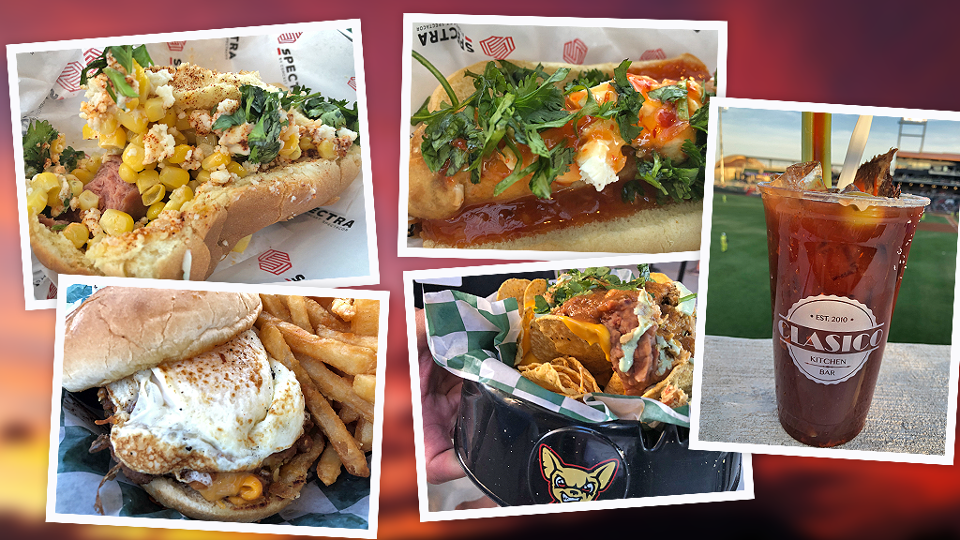 At Southwest University Field, home of the El Paso Chihuahuas, one can find a preponderance of unique culinary options.

After visiting El Paso's Southwest University Field in April of 2014, one of my biggest takeaways was that the food was awesome.

My next visit to this Triple-A facility, home of the Chihuahuas, did not occur until this past June. Five years later, I can report that the food is still awesome. But don't take my word for it. Instead, please take the word of Daniel Acuña.

Daniel, seen in the above photo clutching a drink that we'll get to a bit later on, was my Designated Eater for the evening. In this capacity, it would be his job to consume the ballpark cuisine that my gluten-free diet prohibits. Daniel, a self-described "Army brat," was born in Colorado's Fort Carson and went on to live in Germany, Georgia and Virginia before finally making it back to his parents' hometown of Clint, Texas (part of the greater El Paso area). He currently works as a plane fueler at the Doña Ana Airport, located in Santa Theresa, New Mexico. Daniel and his longtime girlfriend, Andrea, are the proud parents of a baby girl, Camilia, who turns one in September. He and Andrea started dating in 2014, the Chihuahuas' inaugural season.

"Their history is our history," he said.

Our culinary journey was aided and abetted by John Schow, Chihuahuas general manager of food services. I had previously crossed paths with John in 2015, when he was working with the Omaha Storm Chasers. Like many food and beverage professionals I have met at ballparks, John is is an outgoing individual who is passionate about his work and always looking for new ideas. For proof of these traits, please consult the below tweet.

.@epchihuahuas food and beverage GM John Schow has a hot dog tattoo. He got it when he was working for @OMAStormChasers, after they hosted the Triple-A All-Star Game.

El Paso is hosting this season's Triple-A All-Star Game. John said that means he's due for another food tattoo. pic.twitter.com/q4JvZwM9HU

El Paso is a border town - Juarez is located just behind the ballpark - so it should go without saying that Mexican food and drink options are plentiful. Daniel began with a food and beverage pairing that can only be found at Southwest University Field: Border Nachos (served in a dog bowl) and the Clamato Norteño.

Above, please find the Border Nachos. Daniel said that this was his favorite item on the menu, at least in small part because he could take home the bowl for his dog, a "little yorkie" named Penny.

Below, please find the Clamato Norteño, which the Chihuahuas offer via a partnership with El Paso's Clasico Kitchen restaurant. It contains no alcohol, but the general procedure is to add beer. The Clamato Norteño contains tomato juice, clam juice, olives, a "secret blend of spices" and, most imposingly, a hearty slab of beef jerky.

Nachos and clamatos, a winning combination:

"There was chicken in there. There was steak in there," said Daniel, ruminating on the Border Nachos. "But the jalapeño crema, that and the salsa are the best part. You can get regular nachos anywhere, but there's a little something more here."

Next up for Daniel was the Rangoon Dog. To my knowledge, nothing of its nature is offered anywhere else in the baseball landscape. It's a deep-fried wonton-wrapped dog topped with mango-chile sauce, cream cheese and cilantro.

Once again, let's go to the tape.

"It's not bad at all," said Daniel, after his first bite of the Rangoon Dog. After 15 additional seconds of contemplation, his tone shifted from neutral to positive.

"It's really good! The mango-chile and cream cheese go together really well. And then you still have the crispiness of the wonton and the hot dog itself. I'm gonna have to try this again at another game."

John Schow, aforementioned food services general manager, was pleased with Daniel's assessment. It took a lot of work to get there.

"We did one where the cream cheese was inside the wonton, and that made a hot mess in the fryer," said John "We did one without the chile sauce, but it was too dry. There was one where we used parsley instead of cilantro, but we liked the kick of the cilantro."

Daniel, having finished off his Clamato Norteño, was ready for another over-the-top, regionally popular beverage. The Piña Loca, which Daniel can be seen holding in the top of this post, consists of a hollowed-out pineapple filled with virgin piña colada and pineapple chunks, covered with chili-lime powder and chamoy.

This was Daniel's first Piña Loca. He reported that the piña colada flavor was "refreshing" and that although it looked heavy, "the drink itself is nice and light."

"It only looks intimidating, man," he concluded.

There is really no graceful way to eat one of these. And, to Daniel's credit, he didn't even make an attempt to be graceful. He just went for it.

The ⁦@epchihuahuas⁩ Huevos Ranchero Burger is, in a word, messy. pic.twitter.com/8L21DQS8g3

"It tastes like something I'd have at home, especially being from here," said Daniel. "Good stuff, but it's a 10 on the mess-o-meter."

"It's a fork and knife affair," added John. "But the taste is worth the mess."

"The corn tastes like something you'd get from a street stand," said Daniel. "The mayo may have overwhelmed a little, but once the chiles mix in with the cilantro it really hits the spot."

Thus concluded Daniel's time as a Designated Eater. He said that, of the new items he tried, the Rangoon Dog was a "surprising" number one. The Huevos Rancheros Burger placed second, while the "still very good" Elote Dog was third.

"Nachos, though, they're still my go-to," he concluded.

Thank you, Daniel, for your service as a Designated Eater.