Ems' Tissenbaum a very tough out 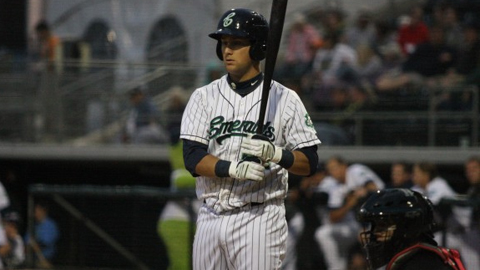 Eugene's Maxx Tissenbaum has been a sabermetrician's dream. The Padres prospect is hitting a modest .285 and has only three home runs, but there's one thing he's been doing very well recently -- getting on base.

Tissenbaum reached safely in all four plate appearances for the second straight game Wednesday, extending his on-base streak to 10 in the short-season Emeralds' 8-2 victory over visiting Spokane.

The Northwest League record for consecutive times reaching base is 13, set by Lewiston's William Hobbs in 1973 and equaled last season by Salem-Keizer's Joseph Staley.

Tissenbaum, an 11th-round pick in this year's Draft, singled twice, doubled and walked, driving in three runs. The 3-for-3 night also extended his hitting streak to seven games, which he credits to a discerning eye.

"[I've been] waiting until I get a fastball for a strike," he said. "I've been getting in a lot of good hitter's counts, and that can only mean that you're going to get something good to hit later on. It's just about being patient and making sure I get a fastball to hit."

Tissenbaum, who is listed as a second baseman but also has played first and third this season, considers patience at the plate to be one of his greatest strengths. He's struck out only 14 times in 161 at-bats in the Northwest League while drawing 27 walks.

"That's something I worked on a lot at school," he said, "and it's come with me to the pro game now."

Before being drafted in June, Tissenbaum starred for Stony Brook University, batting .390 with 51 RBIs and leading the Seawolves to the College World Series for the first time in school history.

The third-team All-American said his game definitely benefited from spending three years in the college ranks rather than signing straight out of high school.

"It's a very similar type of baseball," Tissenbaum said, "except that you see a lot more front-end pitchers. You don't end up facing some kind of Sunday guy where you get an easy day to get a couple of hits. Every guy in every pitching staff -- starters and relievers -- is going to be a real good arm."

A native of Toronto, Tissenbaum was drafted by the Blue Jays out of high school in 2009, but the prospect of playing for his hometown team did not alter his plans to play college ball.

"It wasn't very difficult," he said of the decision to turn down the Jays' offer. "When I got the call from Toronto, they said they had picked a lot of Canadian guys in the last few rounds that had had good high school careers and they wanted to pick us as kind of a nod to that. When we had negotiations, [they thought] I was better off going to school and developing as a player, and I was very quick to agree with that."

Coming off an outing in which he pitched six hitless frames, Spokane's Connor Sadzeck (1-4) lasted two innings and was charged with seven runs on five hits and six walks.

Zack Cox is a contributor to MLB.com. This story was not subject to the approval of the National Association of Professional Baseball Leagues or its clubs.