Getting Minor League fans prepared for the season's first day 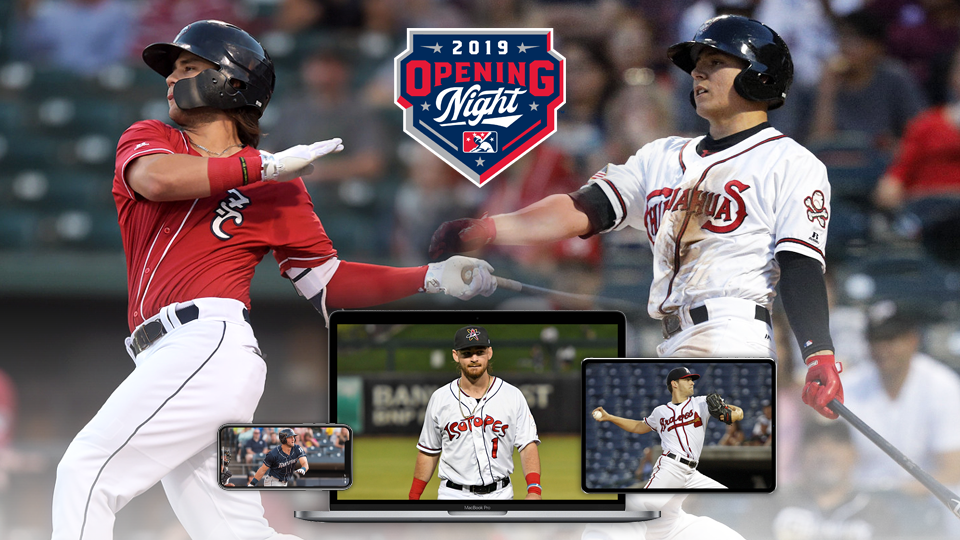 It's here. It's finally here!

One of the most exciting days on the baseball -- or any -- calendar comes Thursday when 118 Minor League teams begin their 2019 seasons, all on the same day. (Erie and Trenton open Friday.) To get fans fully prepared for the the first 24 hours of Minor League Baseball, we've put together a comprehensive guide on what to read, watch and listen to as part of their Opening Night experience. First, download the First Pitch app onto your iPhone or Android device. A must-have for any fan interested in prospects and the Minor Leagues, First Pitch has been completely rebuilt for 2019 and makes it easier than ever to find and follow your favorite teams and farm systems. Along with stats, scores, breaking news and alerts, you can watch games on the go -- in high definition -- with MiLB.TV.

Speaking of MiLB.TV, let's make sure that subscription is up to date. For $12.99 a month or $49.99 for the entire season, you'll have access to home games for more than 100 Minor League clubs. In total, more than 6,500 games will be streamed on MiLB.TV this season with up to 75 percent in crystal-clear high definition. Don't worry if you miss anything -- complete games also can be found on demand in the archives. But you'll only have access to all of this with an MiLB.TV subscription, so get on that ASAP. You'll need it in (checks watch) 3 1/2 hours.

On Opening Night, as with every night during the Minor League season, attention is focused on the action on the field. But if you're interested in "outside the lines" coverage, make sure you're following the work of MiLB.com's Ben Hill (a.k.a. "Ben's Biz"). Ben's focus is the business and culture of the Minors, dealing with everything from promotions to food to ballparks to notable fans. Over the last nine seasons, Ben has visited 174 Minor League ballparks; his 2019 travels will see him visit new stadiums in Fayetteville, Amarillo and Las Vegas as well as an assortment of old favorites. (His full itinerary will be released next week). Check out Ben's MiLB.com page for an overview of his recent work.

11:30 a.m. ET -- OK, so you've researched what happens outside the lines, let's get back to the diamond. Over the last few weeks, the MiLB.com staff has been compiling Prospect Primers on each of the 30 farm systems in affiliated baseball. Read up on the shining stars, full-season debutants and potential breakout prospects in your favorite organization. What does MacKenzie Gore have to do to put last year's injuries behind him? What can Wander Franco do for an encore as he takes on Class A for the first time? No better way to get prepared than to study up.

12:30 p.m. ET -- Rest the eyes a bit. You'll need them for game-watching, starting in about 90 minutes. Grab some lunch (a hot dog perhaps?) or, if you're in one of the western time zones, maybe put on another pot of coffee. While you're getting prepared, put on the Minor League Baseball podcast in the background. The Show Before the Show comes to you every week on iTunes, Google Play, the MiLB.com site or anywhere else you might find podcasts with breakdowns on that week's news along with interviews with prominent prospects, coaches and other folks around the Minor League Baseball world. This week, we'll have a season preview with predictions aplenty from co-hosts Tyler Maun and Sam Dykstra and appearances by Ben and MiLB.com writers Josh Jackson and Kelsie Heneghan. Consider it the audio section of your preparation just before it's time to ...

2:05 p.m. ET -- Play ball! It'll be a race to see which of the two games in New York will give us the official start to the 2019 season as Syracuse hosts Pawtucket and Buffalo entertains Scranton-Wilkes/Barre. (Yes, yes, the celebration is called Opening Night this year, but there are matinees to enjoy.) Both games are on MiLB.TV -- as are all Triple-A games -- and it's possible to flip between the two, according to however the action moves you. In terms of prospects, Buffalo should have the more loaded team. No. 11 overall prospect Bo Bichette will lead the Bisons lineup, and he'll be joined by fellow slugger/son of a Major Leaguer Cavan Biggio. But Pawtucket's got its own promising slugger in Michael Chavis, who put up a .919 OPS during his brief time in the Minors last season, while Syracuse has Tim Tebow making his Triple-A debut. Interestingly, Tebow homered in his each of his season debuts -- in 2017 with Class A Columbia and last year with Double-A Binghamton, so maybe expect some fireworks from the Heisman Trophy winner.

2:30 p.m. ET -- Between innings in those two games would be a good time to familiarize yourself with the myriad changes that have taken place on the Minor League landscape. Ten teams changed affiliations following the 2018 campaign, with six occurring at the Triple-A level (a full overview can be found here). This year also brings the arrival of three new teams -- the Amarillo Sod Poodles, Fayetteville Woodpeckers and Rocky Mountain Vibes -- as well as two teams with new names in the Las Vegas Aviators and Syracuse Mets and three with new primary logos. A complete "rebranding round-up" for the 2018-19 offseason can be found here.

4:05 p.m. ET -- More International League baseball! Triple-A Toledo hosts Louisville in the third game of the day. No. 11 Tigers prospect Kyle Funkhouser is slated to be the Opening Night starter for the Mud Hens and he'll be backed by fifth-ranked prospect Daz Cameron, who can show plus speed, play a mean center field and run into the occasional ball at the plate. Detroit fans should be clued in to the farm system as part of the club's rebuild, and this is a fine place to start.

6 p.m. ET -- Two more games begin around now, and 13 others follow in the next hour. In fact, 56 games will begin between 6-10 p.m. ET. We'll take you through some of the more notable games the rest of the way, but if you'd rather do a Choose Your Own Adventure version of Opening Night, check out the evening's full Minor League schedule here.

6:30 p.m. ET -- In the Florida State League, the Dunedin Blue Jays are hosting the Clearwater Threshers. But this game, as with all Dunedin games this year, will take place at the Threshers' Spectrum Field. Due to extensive renovations at Dunedin Stadium (Toronto's Spring Training home), the D-Jays won't be playing there at all in 2019. Sixty-four of their 70 home games will take place at Clearwater's Jack Russell Stadium, the Threshers' former home as well as the site of Philadelphia Phillies Spring Training from 1955-2003.

7:05 p.m. ET -- The Fayetteville Woodpeckers, Class A Advanced affiliate of the Houston Astros, begin their existence with a road tilt against the Potomac Nationals. The Woodpeckers, who spent the last two seasons operating as the Buies Creek Astros, will be the first team to play in Fayetteville since the South Atlantic League's Cape Fear Crocs relocated to Lakewood, New Jersey, following the 2000 season. The Carolina League team will play its home games at brand new Segra Stadium, with the home opener scheduled for April 18. Meanwhile, this will be Potomac's final season at G. Richard Pfitzner Stadium; in 2020, the P-Nats move to a new ballpark in nearby Fredericksburg, Virginia.

Ten minutes after the Woodpeckers, the Amarillo Sod Poodles make their debut in a road game against the Corpus Christi Hooks. The Sod Poodles, Double-A affiliate of the San Diego Padres, are replacing the San Antonio Missions in the Texas League (in a corresponding move, the Missions are now a Triple-A Pacific Coast League franchise). The Sod Poodles' new ballpark, Hodgetown, will open its doors on Monday.

8:05 p.m. ET -- It's not only prospects making their season debuts. Rehabbing Minor Leaguers also will start getting their work in as they prepare to return to The Show. The biggest of the night will be Dodgers ace Clayton Kershaw, who pitches for Triple-A Oklahoma City against the Missions. He'll likely be throwing to No. 6 Dodgers prospect Will Smith, previewing a battery that should be in Los Angeles at some point in 2019, and facing a potentially potent Missions lineup that features Keston Hiura, Corey Ray, Mauricio Dubon and Lucas Erceg. The Dodgers and Brewers matched up in a thrilling NLCS last year and some of these players could see each other again this fall. You'll want to say you saw them when by tuning in now.

9:05 p.m. ET -- It's a new era for Las Vegas' long-running PCL franchise, which begins the season on the road against the El Paso Chihuahuas. The team, formerly the 51s, rebranded this offseason and is known as the Aviators. There's a new affiliate in place as well; after six seasons with the New York Mets, the club is partnered with the Oakland Athletics. These changes were precipitated by the move to new Las Vegas Ballpark, which debuts Tuesday when the Aviators host the Sacramento River Cats.

As for the play on the field, there will be a few Top-100 prospects to watch in this one. No. 23 Luis Urias is back with the Chihuahuas after playing 12 games with the parent Padres last year and, after watching Fernando Tatis Jr. claim a spot on the San Diego infield, the 21-year-old should be champing at the bit to fight his way back. The Aviators boast No. 44 Sean Murphy, who has a cannon of an arm behind the plate and has shown a solid bat in three Minor League seasons. He could be ready for takeoff in his first season in the hitter-friendly PCL.

10 p.m. ET -- There are five games in California to wrap up Opening Night. The most notable may be in Fresno, where the Grizzlies will begin their era as a Nationals affiliate. As a result, the lineup will boast one of the most promising bats in No. 25 overall prospect Carter Kieboom. The 21-year-old right-handed slugger hit .280/.357/.444 with 16 homers at Class A Advanced and Double-A last season and impressed the Nats with a lengthy Grapefruit League stay. He's primarily been a shortstop, but Washington's biggest need might at second base, where he got plenty of looks in February and March. His Opening Day position could be telling, so check in on the lineup whenever it's posted. Then be sure to check in on Kieboom any time he comes to the plate in his Triple-A debut.

1:30 a.m. ET -- Well, that was a full day of Minor League Baseball. The final out should be recorded around now, and it's time to put your head on the pillow. Sleep good dreams of Sod Poodles, RubberDucks, Lugnuts and Jumbo Shrimp. There's plenty more baseball to come.