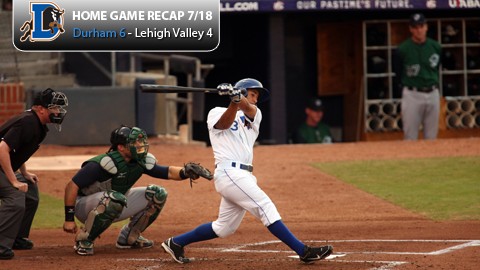 DURHAM, NC - The Durham Bulls rallied for three runs in the bottom of the fifth inning on their way to a 6-4 victory over the IronPigs on Wednesday night. Leslie Anderson and Cole Figueroa each provided three hits, with Figueroa also driving in three, as the Bulls took a 2-1 series lead over Lehigh Valley.

For the second straight night, Durham jumped on the board first. Anderson doubled to start the second and was followed by a walk from Tim Beckham. Figueroa blasted his 13th double of the season to left field, scoring the two and putting the Bulls on top 2-0.

Lehigh Valley chipped away at the lead scoring a run on a controversial home run from Andres Blanco in the third. Blanco's blast bounced on top of the wall and back into play, but the umpires signaled for a home run. Charlie Montoyo went out to dispute the call, but after a brief conversation between all three officials, the call remained a home run. The IronPigs added two more to take a short-lived lead in the following frame.

The Bulls' fifth proved to be the difference in the game. Henry Wrigley singled off of Pat Misch (L, 7-11, 4.62) to lead off the frame. He was caught stealing second, but Pigs' first baseman Cody Overbeck threw the ball away, committing the first of two Lehigh Valley errors in the inning. The following batter, Chris Gimenez clobbered a double to dead center tying the game at four. After Overbeck misplayed a ground ball to allow Reid Brignac to climb aboard, Durham continued to add on runs. They scored three in the frame thanks to a sac fly by Beckham and a run-scoring single from Jesus Feliciano, who took over the team lead with his 38th RBI of the season.

Matt Torra was shaky in the start tonight. Durham's most reliable starter over the last two months only lasted 4.2 IP and allowed four earned runs on nine hits, while walking and striking out one. Frank De Los Santos (W, 2-1, 4.37) replaced Torra and would go on to toss a season-high 2.2 IP, earning his second win of the year. After a perfect 8th inning from Bryan Augenstein, Dane De La Rosa closed out the game to earn his 12th save of the year.