Hometown Collection inspires look at six blasts from the past 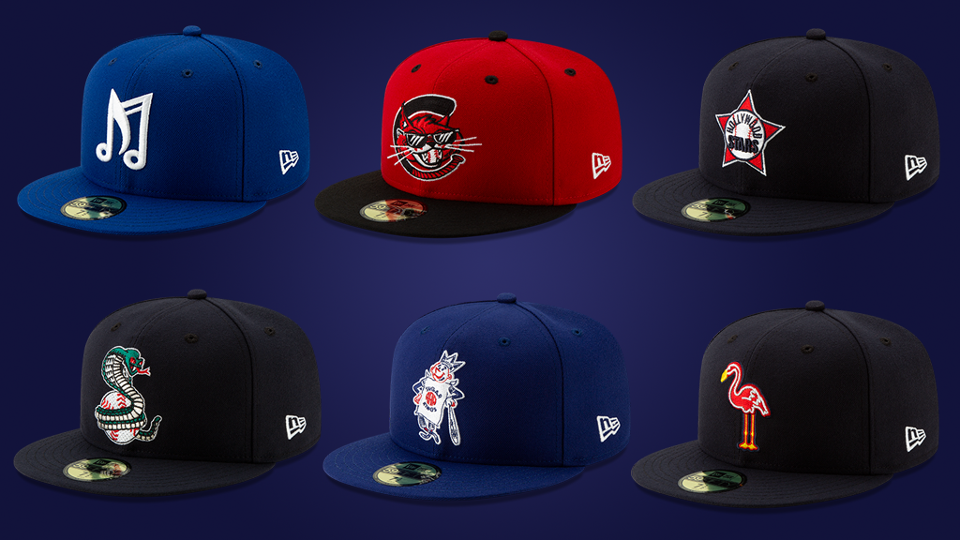 Although there's something to be said for living in the moment -- especially in Minor League Baseball, when the current moment always has a lot going on -- some of us at MiLB.com can't resist diving into the rich history of the Minors at the slightest provocation. As it happens, today the MiLB.com online store releases Hometown Collection gear featuring more six franchises of yore. There could be no better excuse to explore the stories behind these teams from different eras and cultures. Like Nick Senzel, the Charleston Alley Cats began life in 1995 and debuted in pro ball under the umbrella of the Cincinnati Reds. Unlike Senzel, the team was based in the capital city of West Virginia, where it rebranded as the Power for the 2005 season. Helmed by Razor Shines in the first year of a managerial career that lasted until 2015, the '95 Alley Cats went 77-65. That was only good enough for a fourth-place finish in the Class A South Atlantic League's North Division. Brett Tomko, who won 100 games across 14 Major League seasons, threw his first professional pitches for that inaugural Alley Cats team, posting a 1.84 ERA over nine games -- seven starts.

They logged their first postseason appearance in 1997 after going 76-62 to win the North. That success came in large part on the backs of right-handers Buddy Carlyle (who played in 150 Major League games across nine seasons) and Jose Acevedo (who was in the bigs for part of five seasons) and catcher Jason LaRue.

That would be it for playoffs and winning campaigns until the Alley Cats' final season. They played as a Royals affiliate in 1999 and 2000, then became part of the Blue Jays organization. In 2004, Charleston got a lot out of righties Tom Mastny and Shaun Marcum and slugger Ryan Roberts, going 84-56 but ultimately watching Hickory beat the Capital City Bombers in the Finals.

Over the course of their 10 seasons spread among three parent clubs, the Alley Cats saw several other notable players come through, including Alex Rios (2001), Jeremy Affeldt (1999), Erik Kratz (2003) and Brandon League (2003).

Fans could also count on catching Al E. Cat, an orange feline mascot, at games at Watt Powell Park, a pitcher-friendly stadium that hosted Minor League ball consistently but not continuously from 1948 through the Alley Cats' last season. Anyone who came out to the yard and didn't want to leave empty handed could stop by the Meow Mart to pick up souvenirs. While the Meow Mart is gone -- demolished with the rest of Watt Powell Park beginning in 2005 -- fans looking for Alley Cats gear are in luck today. One of the International League franchises that made sense of the circuit's name, the Havana Sugar Kings began play in 1954 and were a mainstay until an abrupt and dramatic departure in the middle of the 1960 season. Sounds like there's a story there, no? There is, and it's a heck of a story indeed.

In their brief IL tenure, the Sugar Kings made a lasting impression. Wearing red and blue uniforms reminiscent of the Cuban flag, the Havana club played at Gran Estadio de La Habana -- now known as Estadio Latinoamericano, where the Cuban National Team hosted the Tampa Bay Rays in a 2016 exhibition --  in front of crowds that reportedly exceeded 30,000 on occasion. They were an unaffiliated team in their debut season of 1954 and finished 78-77, fifth in the eight-team IL. Reggie Otero, who'd wrapped up his 13-year career in the Cuban Professional Year the season prior to the Sugar Kings' arrival and would go on to be a legendary manager in the Venezuelan League, helmed Havana for its first two and a half seasons, leading them to a third-place finish in 1955. The Sugar Kings became a Reds affiliate that season, and a Reds affiliate they would remain until they moved to New Jersey five years later.

Along the way, they graduated through their ranks Cookie Rojas (a five-time Major League All-Star, a two-time big league manager and the longtime Spanish language broadcaster for the Marlins), Mike Cueller (who was the 1969 American League Cy Young Award winner with the Orioles and a part of two World Series championship teams) and Luis Arroyo (who was the 1961 AL Reliever of the Year with the Yankees). Cuellar was with Havana for its last four and a half years, and all three of that noteworthy trio were members of the 1959 squad that beat the Yankees-affiliated Richmond Virginans to take the Governors' Cup and went on to top the Red Sox-affiliated Minneapolis Millers of the American Association to win the Junior World Series -- the equivalent of today's Triple-A National Championship title.

The golden years of the Hollywood studio system and the golden years of the Pacific Coast League not only overlapped but came together. That happened at Gilmore Field, on the current site of CBS' Television City adjacent to the Original Farmers Market in Los Angeles. The Hollywood Stars were partially owned by actual Hollywood stars and played in front of the likes of Groucho Marx, Bing Crosby, Jayne Mansfield and Cecil B. DeMille. Sound like there's a story there? Right again.

The Stars began in 1926, when owner Bill Lane moved the Salt Lake Bees to LA and rebranded them. The inaugural team -- which included PCL legend Lefty O'Doul and dominant spitballer Frank Shellenback (who'd later become Ted Williams' first pro manager and who, in 1929, pitched the Stars to the first of their five PCL crowns) -- was a tenant of the PCL-rival Los Angeles Angels in Wrigley Field. That arrangement would have been temporary had Lane had his way, but he had trouble finding or building a better home. The Stars were renters at Wrigley until Angels president Dave Fleming doubled the rent ahead of the 1936 season, which sent Lane's club to San Diego to rebrand once more, this time as the Padres.

Meanwhile, up the California coast, the San Francisco Missions couldn't pull a profit in a town that loved the team made famous by the DiMaggio brothers -- the Seals. Owner Herb Fleishaker arranged for the construction of Gilmore Field and moved his franchise to LA to play as the Stars, returning to Wrigley for the 1938 campaign. By the end of that calendar year, Fleishaker sold the Hollywood club to a group led by restaurateur Bob Cobb and including DeMille, George Raft, Gary Cooper and others. For the '39 season, they moved the club into Gilmore. There they stayed until MLB expanded westward for the 1958 season.

The Stars' rivalry with the PCL's Angels lasted until the bitter end. On Aug. 2, 1953, 10,408 fans poured into Gilmore for a Sunday twinbill and saw more than a couple baseball games. In the sixth inning of the opener -- which was the seventh of eight straight games played between the two clubs -- Angels lefty Joe Hatten plunked the Stars' Frankie Kelleher, prompting Kelleher to charge the mound and spark a brawl that lasted 30 minutes and required the work of nearly 50 officers of the Los Angeles Police Department to put to an end. Life magazine ran a three-page spread dedicated to the incident.

Arroyo, the southpaw who pitched for Havana in its 1959 championship run, took the bump for Hollywood 22 times in '56, posting a 2.81 ERA. The Kissimmee Cobras, known as the Osceola Astros from 1984 until they rebranded ahead of the 1995 campaign, shut down the century as Houston's Class A Advanced affiliate in the Florida State League. As such, they graduated multiple members of the historic 2005 National League pennant club -- including Lance Berkman (1997), Roy Oswalt (2000) and Morgan Ensberg (1999).

As the San Antonio Missions were "promoted" from the Double-A Texas League to a Triple-A league this year, so the Memphis Blues moved from the Texas League to the IL for the 1974 season. The Blues left a mark on each level.

Playing their home games at the five-year-old Tim McCarver Stadium, the Blues debuted in the Texas League as a Mets affiliate in 1968. That first team fared only so-so (67-69) but featured Rod Gaspar, who led the team with a .306 batting average and 25 stolen bases and went on to play 118 games on the "Miracle Mets" World Championship team of 1969.

The Blues won a crown in '69, too, and they did it again in their Texas League swansong season of '73.

The bump to the IL the following year brought with it a new parent club: the Expos. It was under the Montreal umbrella that the Blues got Gary Carter in '74. The Cooperstown-bound catcher belted 23 home runs and 14 doubles over 135 games in his last Minor League campaign, leading Memphis to an 87-55 record and an IL South Division title.

The Blues were an Astros affiliate for 1976, getting a .355 batting average out of Art Howe over 75 games, but were relocated and rebranded the Charleston Charlies for the 1977 season.

Led by player/manager Max Rosenfield, the Miami Beach Flamingos stormed out of the gate to win the Florida East Coast League title as an unaffiliated club in their second season, 1941. The Flamingos' momentum -- and the 1942 FECL season -- ran up against World War II. No match for global conflict and national anxiety, the circuit disbanded.

That was the end of Rosenfield's playing career, too, but he was back in the managerial role for one more year with the Flamingos when they reformed and joined the nascent Florida International League as a Boston Braves affiliate in 1946. That club featured a 26-year-old righty named Baby Ortiz, who went on to become a teammate of Joe Bauman during his historic 1954 campaign. In 1950, Miami Beach was the final pro team of Jimmy Outlaw, a veteran of 10 big league seasons.

The Flamingos of both the FECL and the FIL played their games at Flamingo Field, which was originally built in 1925 and was the Spring Training home to historic New York Giants, Philadelphia Phillies and Pittsburgh Pirates teams in the 1930s and '40s. Its spot on 15th Street and North Michigan Avenue still hosts competitive baseball. The City of Miami Beach built a new structure -- Flamingo Park Baseball Stadium -- on the site of the old Flamingo Field in the late '60s, and the Miami Beach Hi-Tides high school varsity team plays games there. The Flamingos enjoyed their last full season at that spot in 1952 and missed the '53 campaign. The FIL closed down in the middle of the next year, which saw the reborn Flamingos open the season at Flamingo Field but rebrand as the Greater Miami Flamingos, based on the mainland, a couple months before the league folded.