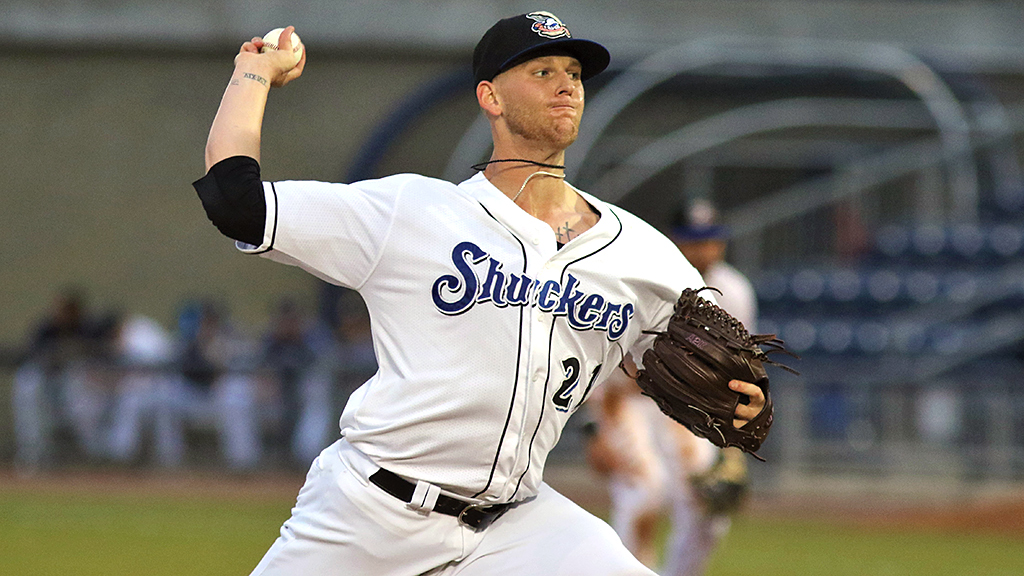 Bowden Francis had never struck out more than eight batters in any of his nine previous Double-A starts. (Michael Krebs)

Bowden Francis had made 37 starts in his Minor League career prior to Tuesday, and in just one of them had his strikeout total reached double digits. You wouldn't have known it, though, by the way he dispatched the Blue Wahoos' lineup at MGM Park.

The Brewers prospect fanned a career-high 12 batters while allowing just one hit over six innings in Double-A Biloxi's 6-0 win over Pensacola. He walked one. He struck out the side twice, in the second and fourth, and at one point whiffed six consecutive batters. Francis (3-4) dropped his Southern League ERA to 5.22.

"The slider was good," Francis said. "We kind of dropped it in for strikes, and then when needed to, we got it down in the dirt where they could chase. But I think it was a mix of pitches to make them feel uncomfortable and they were kind of guessing. [Catcher] Max [McDowell] called a great game. Everything was kind of working."

Francis' first victim was No. 28 Twins prospect Travis Blankenhorn, the second batter of the game, who stared at strike one. He swung at missed the next two, and the barrage was on. Francis threw only two balls in the second and cruised until Taylor Grzelakowski's two-out single in the third became the only hit he'd allow all day. The right-hander locked back in to punch out the next four batters, then worked around a leadoff walk in the fifth.

The only real trouble the 23-year-old encountered came in the sixth, when he issued walks to Grzelakowski and Blankenhorn. Pitching coach Bob Milacki came out for a mound visit. Francis then got Jimmy Kerrigan to ground out to third and Randy Cesar to ground out to shortstop. He needed three pitches to erase the threat.

"In the dugout I'm telling myself, 'Just because we've scored four, just because these guys are kind of struggling right now, doesn't mean they can't turn it on at any point,'" Francis said. "So I just gotta keep attacking. Don't get complacent."

It was the most dominant outing of Francis' career to date. His previous career high was 10 strikeouts on June 25, 2018, when he tossed seven scoreless innings for Class A Wisconsin. He has been durable for the Shuckers since being promoted to the Southern League from Class A Advanced Carolina in April, going at least five innings in all but one of his nine starts, but he had blanked the opponent in just one of those outings. His highest strikeout total was eight.

The best outings, like Tuesday's, are the result of an offseason during which Francis focused on increasing mobility in his hips and shoulders. He built up strength in his lower half to improve explosiveness and stability.

The bad days, like when he didn't make it out of the second inning on June 1, happen when he steers away from being himself, Francis said. He loses a commitment to his mechanics and the walks pile up. Twice this season he's handed out four free passes in a single start.

"I'm just trying to get to that point where I can be consistent every five days," he said. "I'm feeling good. There's some days where I'm walking more than I should, and I just gotta get focused in and hone in on mechanics. I think it will come."

It did Tuesday, and it led to Biloxi's sixth-straight win. McDowell homered to left against Andro Cutura (1-3) in the third to open the scoring, and RBI knocks from Cooper Hummel and No. 28 Brewers prospect Jake Gatewood in the fifth provided more run support. In the eighth, Weston Wilson roped an RBI double and Bruce Caldwell singled in a run to further pad the lead.

Devin Williams kept the shutout intact by striking out three over two innings, and Luke Barker pitched a perfect ninth to close out the win