Franklin steps up at plate, in the field 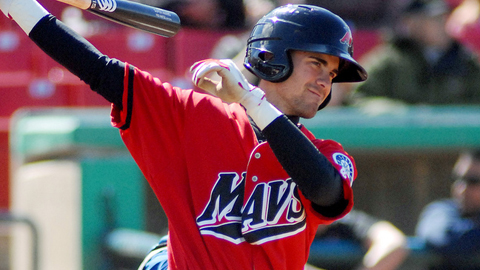 No sleep? No problem.

Completing a whirlwind week of travel to make his Double-A season debut on Thursday, Nick Franklin collected two hits and helped turn a triple play, but the Jackson Generals were beaten by the Montgomery Biscuits, 5-3.

Franklin delivered an RBI double on Biscuits starter Nick Barnese's outside fastball in the second inning, then singled in the third. He also struck out and grounded out in his four plate appearances.

MLB.com's preseason No. 38 prospect made his presence felt even more in the field.

After the Biscuits' scored their first run in the fourth, they had runners on second and third with none out in prime position to close a 3-1 deficit. That threat was foiled on one play.

Generals right fielder Johermyn Chavez made a diving catch on Kyeong Kang's line drive. With Henry Wrigley and Matulia continuing to run, Chavez threw to Franklin covering second base, and Franklin fired on to third to complete the rare feat.

"It was just awesome. It stopped the bleeding, quieted the crowd down," Franklin said of the first triple play he was a part of since high school and the Generals' first since 2007. "I knew where the runners were; it was easy. They didn't realize that [Chavez] caught it."

Franklin also crediting the Generals coaching staff for poring over scouting reports, so he could position himself appropriately on the infield dirt. It's all part of the 20-year-old shortstop's transition to the Southern League.

"I played with some of these guys in Spring Training, so I feel comfortable," he said. "I am looking to take charge and be a leader."

Franklin learned of his promotion via text message in between travels. He had returned home to Florida during the California League All-Star break, then circled back to the West Coast to pack up his baseball gear. He joined his new club on the road in Alabama with less than an hour of sleep on a red-eye flight.

"It's been a long few days for me," he admitted.

Franklin batted .275 with 20 extra-base hits in 64 games with the Class A Advanced High Desert Mavericks. The 27th overall pick in the 2009 draft also was 13-for-14 in stolen base attempts.

"I feel like I could have done better," he said. "I'm just looking to move up, not just to Double-A, but to the big leagues."

Generals starter Tom Wilhelmsen was strong for six innings, allowing a run on five hits, but Taylor Stanton gave up four runs in the seventh to cough up that 3-1 lead. Kang's two-run homer tied the game and Stephen Vogt's two-run single capped the scoring.