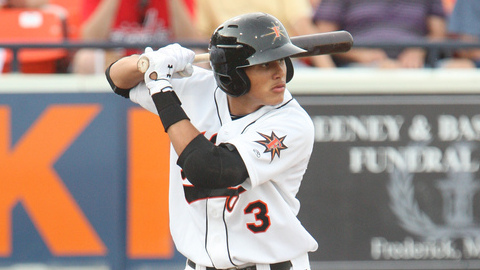 This offseason, MiLB.com will be honoring the players -- regardless of age or prospect status -- who had the best seasons in their organizations. We're taking a look at each team to determine the outstanding seasons in Minor League baseball. Select a team from the dropdown below.

The past season was far from a banner campaign for the Orioles' Minor League system, but that does not mean the year was without its highlights. Though the Bowie Baysox missed out on the playoffs by half a game and three teams posted the worst records in their respective divisions -- the Norfolk Tides, Delmarva Shorebirds and Aberdeen IronBirds -- the Frederick Keys had a year to remember.

Led by some of the most promising players in the Orioles system, Frederick broke a franchise record with 80 wins, a mark that also led the Carolina League. The Keys then went 6-3 in the postseason, winning the league championship for the first time since 2007. The title represents the fourth in team history and the first in the O's system since the last time Frederick took home the Mills Cup.

Catcher -- Jake Fox, Norfolk (68 games), Baltimore (27 games): Despite spending a solid chunk of the year in the big leagues, Fox led all catchers in the Orioles' system with 12 homers and 58 RBIs. His .275 average and .842 OPS were also tops among O's catchers who played in as many games as he did in the Minors.

First baseman -- Tyler Townsend, GCL (five games), Frederick (67 games): The 2009 third-round pick enjoyed a breakout season, batting .312 with 14 homers (fifth in the organization), 58 RBIs and a .941 OPS. He earned a selection to the Carolina League All-Star game and paced the Keys in a number of offensive categories, including slugging percentage and OPS. Unfortunately, he was on the disabled list throughout the playoffs, so he was unable to participate in Frederick's championship run.

"Townsend used the whole field -- he had some power," Frederick manager Orlando Gomez said. "He's a guy that put the ball in play and made contact. He's learning how to play first base. What's holding him back right now are injuries. But offensively, he's talented."

Honorable mention to Joe Mahoney, who batted a combined .294 with 11 homers and 67 RBIs in 85 games with Bowie and three with Frederick.

Second baseman -- Greg Miclat, Bowie (120 games): Miclat gave the BaySox everything one looks for in a hitter at the top of the order -- he reached base at a .371 clip and he was incredibly successful on the basepaths, swiping an organization-leading 50 bags in 53 attempts. His gaudy stolen base total was second to only Anthony Gose in the Eastern League, and his 78 runs scored ranked fifth.

Shortstop -- Manny Machado, Delmarva (38 games), Frederick (63 games): The third overall pick in 2010, Machado did not disappoint in his first full season of professional baseball. The slick-fielding shortstop showed off more than just his glove, hitting a combined .257 with 11 homers, 50 RBIs, 161 total bases and 11 steals. The 19-year-old earned numerous awards, taking part in both the South Atlantic League All-Star Game and the All-Star Futures Game in Arizona.

He was also named the Carolina League's Playoff MVP, batting .344 (11-for-32) while leading the league with nine RBIs and eight runs in nine games.

"Right now, he has more than one strength," Gomez said. "He can catch the ball, he can throw. He's going to hit with power. One thing I like a lot, in big games he steps up. His makeup is very good. He showed me that during the year, but also in the playoffs -- the way he went about his business, and the way he worked at everything."

Third baseman -- Jonathan Schoop, Delmarva (51 games), Frederick (77 games): Schoop was another prospect who split the year between Class A and Class A Advanced, hitting .290 (third in the organization) with 13 home runs and 12 steals. He led all Orioles affiliates with 82 runs and 221 total bases while falling one short of the RBI lead with 71. Like Machado, he was a big part of the Keys' postseason success, batting .314 (11-for-35) with a homer, four RBIs, six runs and two steals.

"He can play second base and has good lateral movement -- he can go to his right, he can go to his left," Gomez said. "He can turn the double play. He can play shortstop, third base. What I like most about him is he's a very smart kid. For 19, he's smart. He made adjustments, and he learned about himself a lot."

LJ Hoes, Frederick (41 games), Bowie (95 games): Hoes started off the year in mediocre fashion, batting .241 with three homers and 17 RBIs while playing mostly second base for the Keys. However, he picked up his play significantly after a position change and a promotion. Playing as an outfielder for the Baysox, he hit .305 with six homers and 54 RBIs. Overall, the 21-year-old finished fourth in the system in average (.285) and second in RBIs (71).

"He can swing the bat," Gomez said. "When he moved to the outfield -- that was one of my recommendations during the year -- I think he relaxed, and he made some adjustments at the plate. He used to drift a little bit, and he learned how to stay behind the ball better, and that's why he got really hot and started swinging the bat better."

Kyle Hudson, Frederick (23 games), Bowie (28 games), Norfolk (68 games), Baltimore (14 games): After starting the year with his third stint in Frederick, Hudson finally broke out and advanced all the way to the Majors. The speedy 24-year-old has yet to hit his first home run as a professional, but he set career-highs with a .375 on-base percentage and 41 steals in the Minors. He also checked in at second in the organization with a .297 average.

"He's the type of kid that can run," Gomez said. "He's going to cover some ground in the outfield, he can steal a base."

Matt Angle, Norfolk (108 games), Baltimore (31 games): Angle does not hit for much power -- his four homers this year tied a career high -- but his speed and smarts on the basepaths are hard to find. Between the Majors and Minors, the 26-year-old center fielder stole 38 bases while getting caught just four times.

Allenson, however, talked more about how his athleticism helps on defense.

"He's a really good outfielder," he said. "He gets really good jumps, good routes to the ball. He's got an arm that's a little above average, but it's very accurate, so it plays way better than that. I've been a big league third-base coach, and I was pretty aggressive -- there's not many guys that throw guys out. This guy did as good a job as anybody I've had play."

Utility/DH -- Buck Britton, Frederick (25 games), Bowie (82 games): Britton played a little bit of everything in 2011, appearing at every fielding position besides pitcher and catcher. Spending most of his time at the hot corner, the 25-year-old hit .297 with six homers and 63 RBIs across two levels. His .799 OPS topped his previous career high by more than 100 points.

"Any time you get a guy who can play different positions and can help you offensively, he's going to have value," Gomez said. "He can pitch hit and stay in the game. The more he plays the game, the better he's going to get."

Right-handed starting pitcher -- Timothy Bascom, Frederick (one game), Bowie (29 games): His 2.97 ERA ranked second in the Orioles' system, while his 117 strikeouts checked in at fifth. Though Bascom spent part of the year in the bullpen -- he made 18 starts and 12 relief appearances -- he performed slightly better as a member of the rotation. The 26-year-old went 2-0 with a 3.12 ERA out of the 'pen, compared to 8-4 with a 2.94 mark as a starter.

Left-handed starting pitcher -- Mike Ballard, Bowie (17 games), Norfolk (10 games): The 27-year-old led the organization with 150 strikeouts in 159 1/3 innings, and his 3.84 ERA placed eighth among qualified starters. His 5.00 strikeout-to-walk ratio was also the best of any pitcher in the system who made more than eight starts.

"If Mike's going to pitch at the big league level, he needs to able to spot his fastball, get ahead, and throw any one of his pitches for strikes," Allenson said. "I saw those guys when I played in the big leagues, guys who tricked you and knew where they were throwing the ball."

"He's got a pretty good fastball, although it's straight," Allenson said. "It's 92-94, but it's very straight. He's got an above-average slider that he needs to get better command on."

Honorable mention to Daniel Klein, who went 3-1 with a 1.11 ERA in 32 1/3 innings for Frederick and Bowie. The righty was dominant when he was on the field, striking out 37 and walking only six but did not play in a game after June 1.

David Heck is a contributor to MLB.com. This story was not subject to the approval of the National Association of Professional Baseball Leagues or its clubs.