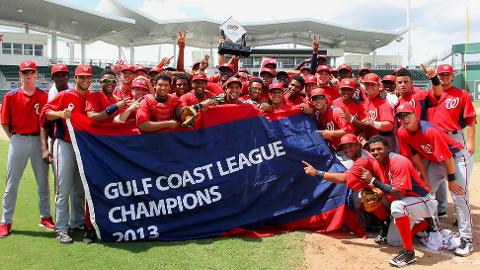 The Nationals outscored their opponents, 23-6, in the playoffs. (Cliff Welch/MiLB.com)

In staying calm, the club racked up a 49-9 regular-season record, swept to a league championship, and now, a MiLBY for best team.

When a team compiles an .845 winning percentage, obviously, a lot things go right. The Nationals rattled off 17 straight wins, starting July 27 against the Mets and ending Aug. 15 against the Marlins. The club never lost consecutive games. It won its final six regular-season games before sweeping to a Gulf Coast League title.

One of the keys to the club's success was the pitching. As a staff, the team compiled a 2.45 ERA, a mark that was 0.47 better than the next closest team. Only one team in the Minor Leagues, the Class A Bowling Green Hot Rods, managed to better that mark. The Nats racked up a remarkable 11 shutouts in 58 games. In fact, no team in the Minors boasted more of those.

It wasn't just the pitching, though, as the offense was just as good. As a team, hitters led the league with a .281 average and a .732 OPS. The offense averaged 5.5 runs per game, .73 better than the next-closest squad. The club posted the best regular-season record in league history.

"To be honest, we had guys hitting .230 and they were an integral part of this team," Anderson said. "The makeup of our kids was off the charts and that made the development easier. Having a good good mentality and being good people helps out a lot besides having talent. I felt like that was one of the things that helped us be successful."

The two-word imperative "Don't panic" became the team's rallying cry and stuck for the duration of the season.

"To be honest, I heard it during Spring Training," Anderson said. "I turned to one of the coaches and said, 'It just makes sense.' We were hoping to get them to slow things down and not panic. The kids liked that, the Latin guys were yelling that in Spanish -- it kind of helped a little bit.

"We had T-shirts made, we worked out with them. There were people, rehab guys, that were begging for the shirts -- it was pretty cool."

Though that kind of winning percentage at any level is impressive, it's particularly so at a level where rosters are constantly in flux, with players moving up.

"I've talked to a lot of people in pro baseball and they tell me that's unheard of," Anderson said. "Guys move up, guys went and took over the role that needed to been filled. To see these young men mature, it was amazing.

"They just got used to winning. Of the nine games we lost, we got no-hit one game and I think it was the first part of the doubleheader. They no-hit us and the next game we put up 11 or 12 runs. They didn't panic. We lost another game, 12, 14 runs and we never lost to those guys again. It didn't bother them. It worked for us."

Maybe the most remarkable stat was the Nationals record in games in which they trailed after the sixth inning: 6-7. No team in the league came close to that mark. According to Anderson, it goes back to the mantra.

"It was a matter of who was going to do it. It was a different guy each time -- that was the neat part about it. It was who's getting on, who's gonna steal a base, move them over, come through with a big hit. It was one through nine and when you go to the bench, there were no people putting their head down. Those kids really did it every single day."

Winning the championship might be something easy for a club that clinched with 17 games left in the regular season to take for granted, but Anderson said that was never the case.

"It was a one-game playoff right after the season was over, and if we would have lost the game, the season would have been over," he said. "We were fortunate to build on the things we did in the season. It was great to see that after we clinched, they weren't done. They wanted to keep winning, they wanted to break the record, second, and they wanted to win the championship third. For these kids, it was just another challenge, and that's what got us going and kept us going."

The playoffs went much the same way the regular season went with the Nationals outscoring their opponents, 23-6. In the first game, Hector Silvestre tossed six one-hit innings while Ward, a third-round pick in June, homered and drove in three runs to send the club to the GCL Finals.

In the opening game, not panicking paid off again. Trailing in the seventh inning, the Nationals scored 10 runs in the final two innings to run away with a 10-3 win. By then, the championship seemed like a foregone conclusion, especially when the Nats scored three second-inning runs in the final game en route to a 7-2 win and a title.