Path of the Pros: Jayson Werth

Former first-round pick transitioned from catcher to outfield
By Danny Wild
About four years after drafting him out of a Central Illinois high school, the Orioles had seen enough of their first round pick, Jayson Werth. The consensus among the O's brass was that Werth, a catcher, would never make it.

Baltimore, looking for a franchise backstop, questioned Werth's throwing arm. They questioned his footwork, his work ethic and his skills. He wasn't Major League material.

"I didn't believe that," said Dave Machemer, a longtime Minor League skipper who managed Werth for the majority of the prospect's first few years in baseball. "We'd have meetings, and they would say all this stuff about him, and I stood up and said, 'You guys are wrong, he's going to play in the big leagues.'

"And they would say, 'Oh, ha ha ha.' I said, 'Well, we all have our opinions, and I'm gonna give you mine,' and that was 1998. You could see him progressing and getting stronger and the type of kid he was. I liked his body, his athleticism, his ability to square the ball up. I knew he could move from behind the plate, and that's what happened."

Machemer, who's spent 37 years in baseball, doesn't mind bragging a little bit these days, not after watching Werth vault to stardom with the Phillies and then sign a mammoth, long-term deal with Washington this winter.

"He was a very likable kid, a very free spirit, people were drawn to him. He was that type of personality," Machemer said. "He was a great athlete, but he always came up in the meetings, and people questioned whether he would catch in the big leagues."

To that end, the Orioles were right: Werth's journey through the Minors saw him bounce among three organizations and three positions before finally sticking as an outfielder.

Werth started making noise at Glenwood High School, where in 1996, he hit .463 with five home runs, 36 RBIs and 22 stolen bases. During one eight-game stretch, the catcher hit .724 with five homers and 14 RBIs, helping the Redskins win the Central State Eight Conference title with a 13-1 record and a 31-6 mark overall.

The Springfield, Ill., native led the team through the state playoff push that year -- he knocked in two runs and threw out a would be base-stealer in the championship game, en route to Glenwood's 7-5 win over Aurora Waubonsie Valley for the school's first state title.

Werth was primed for a college scholarship. Ticketed to play at the University of Georgia, plans changed when Pat Gillick and the Orioles selected him with the 22nd pick of the 1997 Draft, moments after names such as Lance Berkman, Vernon Wells, Troy Glaus and J.D. Drew were picked. 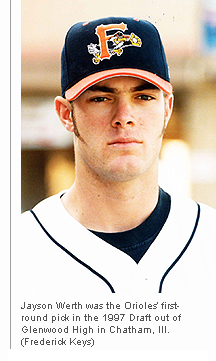 With the selection, Werth had the unique chance to become a third-generation Major Leaguer. His stepfather, Dennis Werth, was an infielder for the Yankees and the Royals for four years, and his uncle, Dick Schofield, played 14 years in the Majors, winning a World Series with Toronto in 1993. His grandfather, Ducky Schofield, won the Series with Pittsburgh in 1960.

Werth passed up Georgia and signed with the O's, making his Minor League debut that summer with the Gulf Coast League Orioles, where he batted .295 in 32 games in the Rookie league. The O's bumped him up to Class A Delmarva for his first full season behind the plate in 1998, when he met Machemer.

"He was tall and lanky and his throwing motion didn't fit behind the plate," Machemer recalled of his first impressions of the 19-year-old. "The Orioles didn't feel, looking back on those meetings, that he would ever mature into a guy who would catch in the bigs."

"He never showed he was under any stress or felt pressured, and that's what I liked about him," he said. "But some questioned his strong desire. He was a little different; he had that free spirit in him."

Jimmy Rollins, Werth's teammate in Philly, had another way of putting it.

Machemer believed Werth would make it, though.

"I knew it," he said. "But I didn't know he would be quite as good as he turned out to be. But I knew he would have an opportunity to move to somewhere else from behind the plate."

He never got that opportunity with Baltimore. A mediocre '98 season -- he hit .265 with eight homers in 120 games at Class A -- left the Orioles frustrated. He got a brief taste of Double-A pitching but struggled, batting .158 in five games at Bowie.

Images of the young Werth from this time will look a little funny to baseball fans today -- he was, as many described, tall and lanky. He wore his hair short and had big glasses. He's transformed into somewhat of a Paul Bunyan since those Minor League days, with his beard beloved by Phillies fans, earning its own unofficial Twitter feed.

Werth was promoted in 1999 to Class A Advanced Frederick and now, in his second full season, the numbers started coming along -- he hit .305 with 14 extra-base hits and 30 RBIs in 66 games with the Keys. He again got bumped to Bowie and responded well, hitting .273 with 33 hits in 35 starts.

Andy Etchebarren, a catcher who spent 15 years in the Majors with the Orioles, Angels and Brewers, managed Werth at two levels from 1999-2000. He recalls a talented, fast hitter who wasn't destined to stay behind the plate.

"There was talk about moving him to the outfield because of his arm strength," said Etchebarren, who has coached and managed at the Major and Minor League level since 1977. "He had the right footwork, but he was so tall, his footwork was a little off at times. He was an awful good runner for a catcher, so they thought maybe he could catch and move him later."

Etchebarren didn't believe Werth would be a Major League catcher, but with his power and speed, he thought he might make it. And even at that, he admits he's surprised what kind of hitter he developed into.

"He was always a competitive guy -- he's a good player," he said. "Am I surprised he turned out to be the player he is? A little bit, yes. I didn't know he had this kind of power, but I didn't think he'd be everyday catcher, no. He didn't have enough arm strength."

His progress stalled in 2000, showing moderate power as he split the year between Frederick and Bowie and hitting a combined .252 with seven homers. There was more to it, though. His on-base numbers remained strong. Despite hitting .228, he had a .361 on-base percentage in the Eastern League with 54 walks in 85 games. Machemer could see the potential.

"I knew he had an easy time hitting the ball to right-center and the other way, but the Orioles questioned his ability to pull with power," he said. "But he could do that and he could drive the ball to the other gap, and as he gets a little older and stronger, I knew he would develop power."

"He had the ability to hit the ball the other way with power, although his swing was a little long. But he's shortened that up now," Etchebarren said. "I thought he'd play in the big leagues, but I thought his bat would lead him there."

It would not be with Baltimore. After hitting .274 in the Arizona Fall League and despite Machemer's pleas, the O's shipped the former first-round pick to Toronto in a deal for lefty John Bale on Dec. 11, 2000.

"They would bad-mouth him, and I told them, 'You guys are wrong. That's my opinion, and you're wrong, and you have your opinion,'" said Machemer. "He's young, athletic, a square-shouldered body. He's gonna develop, hit for some power, get some hits the other way. I wasn't surprised when they traded him, there were so many disgruntled people in that organization."

"I was very surprised when I heard that deal," Etchebarren said. "He was a No. 1 pick, so I was surprised they traded him for that reliever."

"I loved Jayson Werth," Machemer said. "I always liked his abilities. He could always run -- he had that long, easy lanky stride. He was fluid, free and easy. I remember sometimes he would go out to the outfield and shag fly balls in batting practice. It had me thinking, man, this guy can move out there -- he really moves well."

Werth pounded the ball at Double-A Tennessee in 2001, hitting .285 with career highs with 18 homers and 69 RBIs in 104 games for the Smokies. Toronto, stocked with catchers, transitioned him to first base that year under Smokies manager Rocket Wheeler.

"He was a No. 1-type guy -- he was tall, lanky and he could run," Wheeler said. "We were working on his catching skills, but you could tell he could play other positions. What stands out is that he was an athlete with some power. He had some future potential."

Werth had a big year with the Smokies, hitting for power and swiping 12 bases -- Wheeler could foresee a future at higher levels.

"I'm not surprised at all; you could see it in him," said Wheeler, who managed with the Braves at Myrtle Beach in 2010. "He would jump on the ball and hit it a long ways. He needed back then to differentiate the strike zone, and once he got that down, you could tell he was on his way."

Werth, indeed, was. He was sent to Triple-A and responded with 18 more homers and a career-best 82 RBIs.

"He played hard and gave you everything he had," Wheeler said. "He busted his butt when he hit the ball, and he had a few stolen bases. I said, this guy can run a little bit, and I think he made the transition the next year."

The Illinois native earned a September callup in 2002 and made his Major League debut on Sept. 1, less than two years after Baltimore dumped him for a reliever that would appear in just 14 games with the O's before ending up in Japan.

Werth's story doesn't really end there, though. He spent most of the 2003 season at Triple-A before struggling in his second stint with the Jays, hitting .208 in 26 Major League games. On March 29, 2004, Toronto sent him to Los Angeles in a deal for future closer Jason Frasor.

He finally showed success in '04, hitting .412 at Triple-A Las Vegas while spending the majority of the year in Dodger blue, batting .262 with 16 homers and 47 RBIs in 89 games. Those numbers plummeted in 2005, and, after taking an A.J. Burnett fastball off his wrist in Spring Training, he underwent two surgeries. The Dodgers released him, and he contemplated retirement after returning home to Illinois.

Oddly, he got another chance thanks to Gillick, the former O's GM who drafted him. Now the Phillies' general manager, Gillick called Werth and offered him a contract. "It's like finding something by the side of the road," Gillick told The New York Times following the signing.

From there, the legend -- and beard -- grew. Werth earned a World Series ring with Philadelphia in 2008 and posted huge numbers in 2009, hitting 36 homers and knocking in 99 runs.

After 46 doubles and 27 home runs in 2010, Werth signed the deal with Washington, where he's set to take his new look and realized potential for the next seven years.