Fans hurled abuse from the bleachers when Dick "Lefty" O'Neal pitched on the road, children asked to touch his hair and skin to see whether it felt different, and a sheriff armed with a pistol was enlisted to guard his wife, Harriett, when she came to watch him play.

Men in the stands looked at him with suspicion and openly bet money on whether he'd make the team when he first tried out for San Antonio. A mixture of surprise and abuse greeted him when he tossed his first pitch on the road. While he didn't know it -- and never asked for it -- O'Neal was making history.

After drawing the attention of more than a dozen big league scouts and being identified as a top St. Louis prospect as a teenager, O'Neal picked up the distinction of being the only white player ever to suit up for two semi-pro Negro League teams.

"I felt humbled that a black team would give me a chance to play in an established black league," O'Neal said. "I wasn't worried about getting into any record books; I just wanted to play the game I loved.

"For me, it wasn't a black-white issue. I was just a person who had a love affair with baseball and who was willing to play it anywhere."

The southpaw chronicled his journey in a book -- Dreaming of the Majors, Living in the Bush -- and is sharing his experiences with fans at Minor League ballparks throughout his home state of Texas.

O'Neal was one of the former South Texas Negro Leaguers who interacted with fans and signed autographs at a San Antonio Missions home game in 2009. He also was one of 14 former players recognized by the Round Rock Express at Negro League Appreciation Night last April.

"We believe it is important always to remember and pay tribute to baseball's history, and having these players here for a game allowed the Express and our fans to do just that," said Laura Fragoso, the Express' vice president of marketing.

Not the Draft he expected

O'Neal's book, which highlights the key role his faith played throughout his career, was added to the National Baseball Hall of Fame's library in Cooperstown, N.Y., in 2009.

"I wanted to write a story about a history that hasn't been told before, the post-Jackie Robinson era," O'Neal said. "I did it as a tribute to a piece of history that people sometimes shove under the rug because they didn't know it existed."

But there were many Negro Leaguers who worked hard enough without getting to the bigs, O'Neal added.

"My hope, before I die, is that someone will recognize a Roy White, a Cleveland Grant, a Kitty Kat Payton, an Arthur Anderson, a Concho Coleman, a Roosevelt Jackson or an Everett Turner," he said.

O'Neal grew up in Morrilton, Ark., playing catch in the backyard with his father, Gene, and pitching on local Little League teams. He went 32-2 with six no-hitters and 10 shutouts over his final three years of American Legion ball against the likes of future Oakland A's hurler Glenn Abbott. In 1967, he met with scouts from 16 Major League teams who had seen promise in the left-hander with nasty off-speed pitches and pinpoint control.

Cardinals scout Jack McMahan invited the 17-year-old to St. Louis' Double-A affiliate in Little Rock, Ark. When O'Neal received a letter about the Draft, however, it wasn't what he had expected.

"Just a few weeks back from my visit with the Cardinals at Little Rock, I received news that would change my life forever," O'Neal said. "Our country was at war in Vietnam ... and, when I was so close to my ultimate dream, I received a notice in the mail from the Draft Board, and no, it wasn't the professional baseball Draft board."

O'Neal's draft number ensured he would be drafted. He continued his studies at the University of Central Arkansas to defer his military service but upon graduation was sent to Lackland Air Force Base in San Antonio to determine where he would be deployed. O'Neal was told he would serve in Vietnam as a radio broadcaster for the Armed Forces Radio Network.

When the Air Force learned of his baseball background in 1972, though, O'Neal was assigned to Keesler Air Force Base in Biloxi, Miss., as an athletic specialist. A player and pitching coach, O'Neal played for the Keesler Air Force Base Tarpons against the likes of the semi-pro Biloxi Dodgers. O'Neal fanned nine in a three-hit shutout the first time he faced the Dodgers, and when he was later asked to pitch for them, he saw it as a path to the Majors.

"One of the teams [the Air Force] played was an all-black team and I said, 'Golly, there's still all-black baseball.' I thought that it wasn't a big deal. But when I went on the road, boy, did I get a rude awakening. I sort of realized that even in 1972, it was segregation all over again."

O'Neal's love of baseball kept him playing the game, even as he was dealt some surprises during his time in Biloxi.

"One of my most memorable moments ... was when I pitched behind a row of sharecropper houses in Grand Bay, Ala., where people came in buggies and wagons drawn by mules," he said. "You saw the mansion up on the hill in the distance like Gone with the Wind, and I'm in a backyard pitching off a tire, the home run fence is tall grass and the announcers' booth was a treehouse. People don't believe that really existed, but the fans loved it and I had to learn how to get along.

While O'Neal heard more than his fair share of insults and jeers from fans on the road, he's quick to point out that the players, both on his team and the opposition, made him feel like part of their baseball family.

"My teammates and the people I played against were fantastic. Sometimes when I speak with people they expect me to talk a bunch of trash about how badly I was treated because they want me to be the mirror image of Jackie [Robinson]. Yeah, I was called white trash and, yeah, sometimes fans did throw beer cans at me, but the ballplayers themselves treated me fairly. My own team took care of me on the road. They and everybody treated me like family." 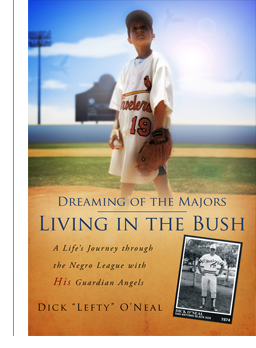 Pitching in the rotation with O'Neal was fellow Air Force recruit and white ballplayer Larry Smith, who said he and O'Neal had no trouble feeling like part of the only mixed-race team in the league.

"Our black teammates really sold us on the idea of playing for them, and they really took us under their wing," Smith added. "Some of the other teams were a bit resentful about white players playing in their league, but it was nothing that our teammates didn't stand behind us about."

"O'Neal was a good player who worked hard. He was a real nice young man," he said. "We traveled all across Mississippi, Louisiana, Florida and Alabama. He fit in on our team real well. We had a couple little problems on the road, but nothing major.

"In Alabama, he played in a park where there was a cow patch that we called the 'Dixie Corner Mess.' That might have been his biggest problem. That was a new experience for him."

The only one of his kind

Two years later, O'Neal was sent back to San Antonio to train new Air Force recruits. He played for the Alamo Enterprises in the Spanish American League, and when he signed with the San Antonio Black Sox, he became the only white pitcher ever to play for the team in its 35-year history.

One game against the Houston Red Sox is indelibly etched in the memory of O'Neal, who went 10-1 for San Antonio.

"Standing on the mound and seeing nothing but black people everywhere ... in the stands and on the field. But then looking down the right-field and left-field fence and seeing trucks backed up to the fence with white folks in the back of the trucks watching the all-black game with their umbrellas and beer.

"When you approached them after the game, wondering why they weren't in the stands, the answer was, 'We didn't feel comfortable doing that.' Then you would ask them why they came, their answer was always, 'Because it was the best baseball in San Antonio to watch.' That scene really tells it all, the way America still was in the early '70s." 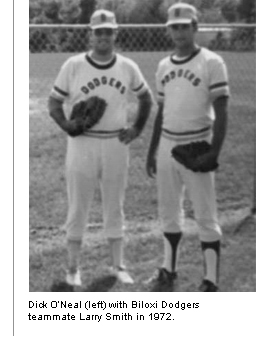 Though O'Neal was one of three white players to suit up for Biloxi, the only Gulf Coast Negro League team that wasn't all-black, he was on his own in South Texas.

"The first game Harriett came to, a big sheriff with a gun on his hip came and met us and said he would sit with her," he recalled. "I thought that was just a nice gesture, but he was to protect her from any fans that came her way because a white woman had never been in the stands before.

Dr. Layton Revel, a baseball historian who established The Center for Negro League Baseball Research said O'Neal deserves to be recognized for the part he played.

"In the 1970s, Dick O'Neal was an outstanding pitcher who was blessed enough to play baseball for two black teams," Revel said. "Did he make it to the Majors? No, but he's had a powerful impact of teaching players through his coaching and scouting [most recently with the Braves], and he has a very wide career in baseball.

"The major problem is that folks want to try and distinguish who is a real Negro League ballplayer -- how would Dick O'Neal have done if he had pitched to Josh Gibson? What is important is to recognize the people for who they were and what they did."

'The biggest chunk of history'

Revel said there's a lot more to the history of black baseball than just the famous names from the middle of the 20th century. Questions still arise over exactly when Negro League baseball ended.

"People don't realize that there were still black leagues all over the states. These leagues continued into the 1980s," Revel noted. "There were a number of leagues around the country where African-Americans wanted to play regionally. It doesn't really matter who you are or where you are or how old you are or what color you are, if you can play ball, you can play ball.

"Yes, Negro League Baseball was in its heyday in the 1920s, the '30s and the '40s, but there are a lot of good players from after that who have never been recognized. There's a lot more to the history than the stars and the headliners."

For O'Neal, it really just came down to one thing that had nothing to do with color, race or money.

"All I can say is that my story is simple, and it's a love story between a boy and his passion for baseball."