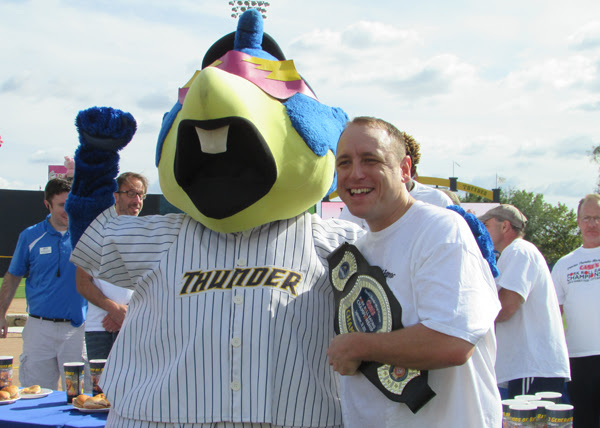 The 2016 season at ARM & HAMMER Park promises to be the most fun summer at the home of the Trenton Thunder. The team is thrilled to announce many of their promotions for the season today.

The Thunder will celebrate the most famous Trenton delicacy, Pork Roll, on Friday, August 12 by giving the first 2,000 fans, ages 14 and up, Joey Chestnut Bobblehead dolls, presented by Case's Pork Roll. The team's annual pork roll celebration on August 12 will feature free pork roll sandwiches to all fans and a few lucky fans will receive a variety of Case's Pork Roll products.

The Thunder will help all fans kick off the golf season with the first annual Golf Night on Thursday April 21 when the team hosts the Akron RubberDucks. The first 1,000 fans, ages 12 and up, will receive a Thunder Golf Towel and one lucky fan will go home with a great prize from a closest to the pin contest after the game. All fans will have the chance to win great prizes from local golf retailers and clubs. Kids will have the opportunity to learn from the pros with educational lessons provided by the New Jersey Golf Foundation on Golf Night.

The fun continues with the premier fundraiser for Trenton Thunder Charities on Saturday April 23 with the return of the Thunder Treasure Hunt. This popular event will send participants on an excursion throughout Bucks, Burlington, and Mercer Counties to hunt for items on their treasure list. The team that collects the most points will win a $1,000 cash prize. Registration and additional information are available at www.trentonthunder.com/treasurehunt

On Friday, May 13, ARM & HAMMER Park will turn pink to raise awareness for the fight against breast cancer, thanks to Radiology Affiliates Imaging. The first 1,500 fans, ages 18 and up, will receive RAI pink and navy caps. Breast Cancer Awareness Night was originally scheduled for Friday, June 3.

The fun will continue on Tuesday, May 17 when the Thunder host the Richmond Flying Squirrels with MLB Network Night. Fans will have the opportunity to meet and collect an autograph from an MLB Network on-air personality.

ARM & HAMMER Park continues to be the most dog-friendly environment in all of Minor League Baseball and on Monday May 23, fans can bring their well-behaved dogs to the game for the Thunder's Bat Dog Celebration.

On Thursday, June 30 the Thunder will honor some of the heroes in the local community with a Hometown Heroes Card Set Giveaway and post-game fireworks. The card set will contain the name and picture of local heroes nominated by their peers. Fans that are interested in nominating a hometown hero can connect with Group Sales Manager Jon Bodnar at [email protected] for more information.

Another kid-friendly giveaway will take place on Sunday July 31, when the Thunder host the Altoona Curve at 5:00pm, when the first 1,000 fans, ages 5-15, will receive Drawstring Bags, presented by Capital Health.

The newly-branded Hartford Yard Goats (Colorado Rockies) will make their only trip to ARM & HAMMER Park in 2016 for a three-game series beginning on Tuesday, August 2. That night will be Yankees Magazine Night, where the first 1,000 fans, ages 12 and up, will receive the latest issue of Yankees Magazine. On Thursday August 4, Thunder fans will enjoy post-game fireworks as part of Irish Heritage Night.

On Saturday, August 13, the Thunder will help kids get set for the new school year with Macy's Back-to-School Night. The night will feature post-game fireworks and giveaways from Macy's throughout the game.

The Thunder will have one of their most unique giveaways of the season on Tuesday, August 23 when the first 1,500 fans, ages 5-15, will receive Cloudman Soap Dispensers, presented by NJEA. August 23 will also be Jewish Heritage Night at ARM & HAMMER Park.

Smith's Ace Hardware is celebrating their 70th anniversary and will give Thunder two chances to take home brand new grills. On Saturday, May 14, Smith's Ace will giveaway a Kamodo Joe Ceramic Grill to one lucky fan and on Saturday, July 16 one lucky fan will go home with a Big Green Egg Grill.

Distribution of promotional items is for guests in attendance only, while supplies last. All promotions, dates and giveaways are subject to change and/or cancellation.

The 2016 season, the 23rd in franchise history, will begin at ARM & HAMMER Park on April 7 when the Thunder host the Erie SeaWolves (Detroit Tigers) at 7:00 p.m. Season tickets, group outings, Pic-A-Plans and Mini Plans are on sale now by calling 609-394-3300. For more information on the Thunder, visit www.TrentonThunder.com.