Righty shows stuff that could dominate at Major League level
By Ashley Marshall
Everyone who works alongside Atlanta farmhand Jairo Asencio knows he has the potential to be an outstanding big league reliever. Now it's just a matter of when -- not if -- he can improve his consistency and mindset so he can dominate there for years to come.

Asencio (3-2) baffled International League hitters this season with the Braves' Triple-A affiliate in Gwinnett, recording a league-leading 26 saves in 27 chances and posting a career-high 1.81 ERA. The only time he wasn't perfect with the game on the line came in an outing in which he allowed one unearned run and went on to record the victory.

He also got his second look at the Majors in the past three years. In six relief outings, Asencio posted a 6.97 ERA in 10 1/3 innings. He did not have a record.

"He had a good year, he certainly did very well," Gwinnett Braves manager Dave Brundage said. "I think it's pretty explanatory when you're bringing in your closer who's 20-for-20. He's so talented, that sometimes you wonder why he's pitching at Triple-A. When he realizes his potential, he will certainly be pitching at the Major League level."

G-Braves' pitching coach Marty Reed added: "Jairo did a great job closing in Gwinnett. Obviously he's got outstanding stuff. He has a plus fastball that sits between 93 and 95, and he has a good slider and a great change. By rights he should be at the back end of a Major League bullpen somewhere. There is no doubt about that."

The 27-year-old native of the Dominican Republic gave Gwinnett a reliable right-handed power arm out of the bullpen when the club needed someone to slam the door.

Asencio was scored upon just once in his first 14 appearances, and he allowed only four earned runs in a 25-game spell between June 5 and Aug. 29. In the month of July, the right-hander posted a perfect 0.00 ERA in 13 games, converting all eight save opportunities that came his way.

"He had a very productive season," Manno said. "He had some good moments with us at the Major League level and he handled the closer's role very well. He has a lot of potential, he has a good arm and he's really excelled in that role. All of the arrows are pointing up, and he has an opportunity to be very good at the next level."

Overall, Asencio allowed one earned run in 29 innings in save situations, good for a 0.31 ERA. However when he entered the game at any other time, he surrendered 10 earned runs in 26 innings (3.46). That, says Reed, is the only thing limiting his potential.

"When he wants to pitch, he can be very good, but we just don't know what we're going to get. We're still trying to figure it out. We are trying to express to him that he is in the Minor Leagues and that he needs to show the people at the Major League level that he can play on a consistent basis.

"You will find out as much about a guy when they go out to pitch in an 11-1 game as you will in a save situation, but he was not always motivated when it wasn't a save situation."

The hurler seems to have a lot of grounds for motivation. He made his Major League debut in 2009 after eight years in the Minors, only to then miss the entire 2010 season after the club discovered he has used a fake name and lied about his age.

Signed by the Pittsburgh Pirates as a free agent in 2001, Asencio -- then going by the name Luis Valdez -- spent the first four years in the Dominican Summer League and Gulf Coast League. He pitched in Hickory and Williamsport between 2005 and '07 before being signed by the Braves as a free agent ahead of the 2008 campaign. 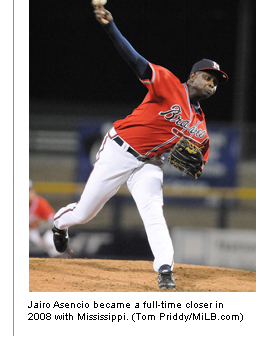 The 6-foot-2 farmhand went 4-3 with a 2.76 ERA and 28 saves -- the most of any Atlanta Minor Leaguer -- in his first year in the system, and he followed it up with 27 saves and a 3.28 mark in Gwinnett the following season. Asencio was rewarded with July and September callups to Atlanta, making his Major League debut July 12 after logging more than 600 innings at the lower levels.

Asencio missed the start of Spring Training last year after visa problems forced him to remain in the Dominican Republic, and the club later placed him on the restricted list after finding out his real identity.

"He has an opportunity to be a late bloomer," Brundage explained. "He is really resilient and his arm is really good. He has all the potential in the world. He has the whole package to pitch at the Major League level, no doubt about it.

"It's a credit to the depth in our system that he wasn't pitching at the Major League level the entire season for the year that he had and the stuff that he has. When you're running out [Craig] Kimbrel, [Jonny] Venters, [Eric] O'Flaherty, [Peter] Moylan ... there's not a lot of room for guys like Asencio. You only have seven guys in the 'pen and those guys are filling the roles in the sixth, seventh, eighth, ninth inning. He'll get his chance."

With a new work permit in hand, Asencio looked to make up for lost time in 2011. He struck out 70 batters over 54 2/3 innings, holding hitters to a .196 clip. He was even more impressive against right-handers, whom he held to just two RBIs all season on the strength of a .143 average.

"He has tremendous stuff," Reed added. "It's about consistency. He has been consistent at the Triple-A level so far, but he hasn't done that at the Major League level. At Triple-A, his numbers are really good. Sometimes people can't adjust to the Majors. Sometimes they can."

Manno added: "His motivation has got better as he's matured and I think he understands what has to happen and what he has to do to improve. The taste of the Major League level was something that once he experienced he wanted to get back. It provided a lot of motivation for him.

"There's always something to learn and develop no matter how long you've been around. You have a chance to get better every day you play the game. Spring Training, everything starts over. If he competes better than the other guys in the bullpen and pushes himself ahead of some of the guys in the bullpen, he has a chance to make the team. There's a lot of opportunities in different places."

Asencio showed this season that he has little left to prove at Triple-A. The big question now is whether he has what it takes to crack the big league bullpen on a full-time basis.