Ask MiLB.com: Can I purchase a team?

Fans, players quiz us on LMB tryouts, old teams, new logos
By
Baseball fans have a lot of questions about the Minor Leagues, its players and this website. We at MiLB.com attempt to answer some of those curiosities -- no promises, though.

Have a question? Shoot us an email at [email protected], drill us on Facebook or Tweet at us #AskMiLB

I am a baseball player who wants to play in the LMB (Mexican League). How can I contact the league/teams? Also, do you know where I could try out for one of these teams? I sort of need to know as soon as possible. I noticed there was a new team called Delfines de Ciudad del Carmen. I was wondering how I can contact them? Do you have an email, fax and/or phone number that I could use? I am a left-handed pitcher looking for somewhere to play, so I was just wondering if there's a way that I can get a hold of them because I know I have the ability to play there. Please let me know ASAP. -- Spencer

The Mexican League has a restriction of five non-Mexican players per team, as the league focuses on the development of Mexicans. Teams tend to fill those spots with former Major League players. You would have to wait for the next LMB Draft, where teams select all players coming from the U.S. who are currently free agents. The Mexican League does not hold tryouts for American players, although all players coming from the U.S. can sign directly with an LMB team if they are free agents. Most of those would have to have a reference, like a scout's recommendation or agent. We've passed along your note to the Mexican League general managers, though. Good luck!

I have recently been researching the history of my hometown of Cairo, Ill. As a boy, I had heard that at one time there was a Minor League team there. The Cairo Egyptians were a team that played in the KITTY League on and off from 1903-50. In 1949, they were a Brooklyn Dodgers affiliate known as the Cairo Dodgers. I then went to your site and found that they were not listed anywhere -- not even a mention of the KITTY League. Is this an oversight? Can I find info on the KITTY League somewhere else? -- Cal C.

It's no oversight. Only current teams and leagues are listed on MiLB.com; the KITTY League -- or Kentucky-Illinois-Tennessee League -- no longer exists. It's similar to MLB.com no longer having a website for the Montreal Expos, for example. Books like The Encyclopedia of Minor League Baseball and Professional Baseball Franchises have information about clubs in Cairo, and KittyLeague.com would be a good starting point to learn about the history of that circuit. The Baseball Hall of Fame's research library in Cooperstown, N.Y., probably would also have some information on the league and its teams.

Grandparents in Montana. Need to know the location of the field in Spokane or Cheney and how to get there, thanks. Montana Red Hots (age 14-16). -- Helene D.

We're going to assume you're traveling to a youth league game in Washington. Spokane has driving directions on its website. We're not involved with any youth league games, though. Good luck to your grandkids.

I follow the Minors from Italy on your website. Would I be able to see games on my PC from here if I buy the season ticket for MiLB.TV? How much does it cost in 2012? Ciao. -- Roberto

Yes, you can watch MiLB.TV on the Internet, regardless of where you live. Check back in the coming weeks for details on the 2012 MiLB.TV package. You can "like" our Facebook page for a chance to win a free subscription, too!

I want to know where on the MiLB website I can find the official rules for the MiLB.TV subscription giveaway contest where one has to "like" MiLB on Facebook. -- Robert

Officially, you'd need to visit our Facebook page, which has a link to all the rules. 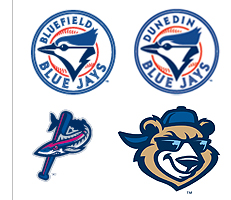 How many new Minor League teams are there for the upcoming 2012 season? With the existing teams, did any change their logos? -- Michael J.

New teams include the Pensacola Blue Wahoos (who joined the Southern League after Kinston moved to Carolina and Carolina relocated to Pensacola) and the Grand Junction Rockies, who replace the Casper Ghosts as the Rockies' Rookie-level Pioneer League affiliate.

The Bluefield Blue Jays and Dunedin Blue Jays both updated their logos to reflect changes made by Toronto. The Daytona Cubs also have a new logo for 2012, which they unveiled during last season's playoffs but have yet to wear on the field. Ben's Biz Blog is a good place to read about recent logo changes and business moves in the Minors.

When will I be able to pre-register for an audition to sing the national anthem for the River Cats? I would hate to miss it again; I missed it last time. -- Linda O.

Good question. We have no idea, since we're not involved with on-field operations for teams, but we do sometimes write about it. The good folks in Sacramento can help you out, though. Good luck!

How are the players' biographies written? Some are very lengthy and detailed, others are very short and others do not exist. -- Ron D.

Some are provided by teams, some are written by our editorial staff and some are a combination, using information from Major League media guides. There are thousands of players, so some may not be as in-depth as others.

I'm playing in the Australian Baseball League for the first time this season. We are playing a fairly high level of baseball. I've been playing professional baseball for seven years [and] am recently coming off an All-Star season in the Can-Am League and also made the All-Star team Down Under. I've been cleaning up my game each season and feel I could help out an organization on the field as well as helping develop players/prospects who may be having a hard time with certain aspects of their game. I just don't know how to go about finding that position. -- Dom R.

You'd probably want to get to some open tryouts this spring or contact an agent/sports management company that can help put you in touch with teams as a free agent. We have some info on the tryouts here. Some of your current and former teammates who are active with a Major League club might be able to direct you to scouts or farm directors as well. Good luck!

I recently started doing some research into a team named the Peninsula Grays who played at the Peninsula War Memorial Stadium in Hampton, Va. One of the challenges that I am having is that there is a lot of conflicting information out there. I am hoping that you can direct me toward places which provide information on individual games, player stats for individual games and, more importantly, any records which players may have held. [It] would be helpful if you could direct me to where I might find images of the team uniforms or logos. -- Kerry H.

According to the book Professional Baseball Franchises, the Peninsula Senators were a charter member of the Carolina League in 1963. The following year, the club was renamed the Grays. In 1969, the Grays were renamed the Astros. Our reference books do not contain many pictures or much information about individual games, just player statistics by league. There were no images of the Grays in the books about the seasons from 1964-68.

You may want to contact the Baseball Hall of Fame, which could have images of team uniforms or logos in its archives.

I would like to join an email blast or get emails about the promotions that the DSL Phillies will be doing from here on out through the season! -- Mike C.

Dominican Summer League teams don't offer the same experience that a domestic Minor League club would (promotions, stadium seating, mascots, tickets, gameday staffs, etc.) -- it's a Rookie-level league designed to evaluate talent of local players rather than provide the entertainment aspect of Minor League clubs in the U.S. So, no, we don't have a DSL Phillies promotional newsletter.

Ahhh, yes, the American dream. We're not aware of any teams up for sale, but league presidents are a good source for clubs that may be for sale -- their contact information can be found online. You also should contact the MiLB legal department about purchasing a Rule Book that details ownership requirements and policies, etc.