New waterfront ballpark drawing fans with incredible view
By Benjamin Hill
If I had to judge Pensacola's Community Maritime Park on the merits of the structure alone, I'd call it merely serviceable. But what elevates the stadium -- and by extension, the Blue Wahoos experience -- to premier status is that it is in service of the spectacular.

One must begin with Community Maritime Park's most striking aspect: the view, which is certainly on the short list when it comes to the best in all of Minor League Baseball (joining the mountainous backdrop of Salt Lake's Spring Mobile Stadium and the sight of Centennial Bridge looming from behind Quad Cities' Modern Woodmen Park). All of Community Maritime Park's 5,200 fixed seats point toward Pensacola Bay, and those choosing to lounge on the right field party decks or within the berm area's vast expanse of grass will find themselves even closer to these aquatic environs.

The view is, quite simply, the star of the show, as much a part of the experience as anything taking place on the field.

"We wanted to create a unique ambiance, one that was user-friendly and that gets fans as close as they possibly can," said Blue Wahoos president Bruce Baldwin. "This is a party destination, created so that people can have fun."

I would certainly agree that Community Maritime Park is a party destination. I attended games last Thursday and Friday, both sellouts, and though there was certainly interest in the Southern League action on the field, this was a social scene first and foremost. The seats were largely full, but the concourses, party decks, and berm areas were absolutely packed (a testament to the popularity of a $5 general admission ticket). 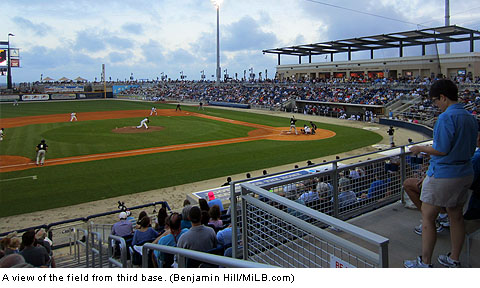 Thursday's crowd was younger and rowdier (it was "Thirsty Thursday," after all), while Friday's most prominent demographic was families with young children, but in both cases a raucous energy prevailed. The electric environment was indicative of the success that the team has experienced in the early-going -- nine of the first 15 home games have been sellouts, and the "Bait and Tackle" team store has already turned over its entire inventory four times. Pensacola had gone the last 50 years without an affiliated baseball team (the Blue Wahoos are the Double-A affiliate of the Reds), and the population is clearly excited about this new era of the region's professional sports history.

The response thus far has been a validation for team owner Quint Studer, a local businessman who spent the past seven years trying to get the ballpark built (Community Maritime Park cost $14 million, the centerpiece of a larger $52 million "live-work-play" development project). It was a long, winding and oft-contentious road, spanning three mayoral administrations, two referendums and a state Supreme Court ruling.

"Any time you're dealing with public money, you're going to have conflict," Studer. "I think that [opponents of the stadium] had a rough time visualizing the final project. And now that they see it, I'm hearing, 'Gee, I like this.'"

The main impetus for the stadium project was for it to serve as a hub for economic development, under the assumption that people lured downtown for a baseball game would spend money in and around the area. The stadium is a 10-minute walk from the bars and restaurants of Pelafox Street, and the parking lot on the grounds of the stadium itself is small enough so that most game attendees will indeed be making the trek from downtown. The team runs shuttles to and from the stadium (as does popular watering hole The Seville Quarter) and a local pedicab company has quintupled its fleet from three to 15 in order to accommodate the resultant demand for its services.

Lots to eat, even more to drink

Of the five Southern League stadiums built in the 21st century, Community Maritime Park came with the cheapest price tag. (There are no suites, for example, and storage areas were improvised within space located underneath the bleachers.) But there was no skimping on the food and beverage end of the equation, which are centered within the equally-sized "Port" and "Starboard" concession stands. Signature items provided by executive chef Chris Voorhees and director of food and beverage Mark Micallef include a Shrimp Po' Boy Wrap and the "Heater Burger" (a third-pound patty topped with cheddar, Canadian bacon, onion rings and house-made "Wahoo" sauce). But, this being a marine environment, I was partial to the Sea Dog -- a foot-long breaded cod sandwich topped with a tart cabbage slaw, tartar sauce and the aforementioned "Wahoo Sauce." (The sandwich is in keeping with the team's "everything fresh" philosophy, as the cod is acquired at a seafood market located across the street.) The alcohol options go far beyond the standard domestic draft offerings and are indicative of Pensacola's propensity for the party. Mulroy's Bar, located behind home plate, served a slushy concoction called "The Blue Wahoo" which included two parts Strawberry Moonshine and is topped with two strawberries that had been soaked in the stuff. I ordered one (out of professional obligation, of course), and can say with certainty that it was the strongest drink I've ever had at a ballpark. If you're drinking at Mulroy's during the game, make sure to leave the driving to the pedicabs.

The team also has its own draft beer, called "Ono," which was created in partnership with the local Budweiser distributor and will soon be available outside of the ballpark. Less discerning and/or more budget-minded drinkers flock to "Thirsty Thursday," featuring $2 beers. Thirsty is indeed the operative word here, as approximately 6,500 beers were sold last Thursday.

The early returns have been phenomenal, but Pensacola's baseball experiment is still very much within its nascent stages. It was a great challenge to get the team off of the ground in the first place, but an even greater challenge will come once the honeymoon wears off. Will the team have what it takes to survive and thrive in the ensuing years and decades?

"The key to sustainability is service," said Baldwin, and here he is espousing the business principle that has defined Studer's career. His company, the Studer Group, is dedicated to providing health care organizations with, as stated on the company website: "a platform for creating tools, techniques and systems aimed at improving organizational performance." Studer's mantra is customer service, and he practices what he preaches. In a video shown on the scoreboard between innings, Studer gives out his email address and urges fans to contact him with their thoughts on the Blue Wahoos experience. He spends his time on the concourse (there is no owner's box) thanking employees and fans alike, and is endlessly encouraging attendees to fill out the email surveys that are sent to every member of the ticket-buying public.

The relentlessly friendly gameday staff directly reflects this approach, from the usher collecting trash between innings on the grass berm to the jovial elevator operator ("Don't anybody dare go touching my buttons!" he jokingly admonished) to the smiling attendants stationed outside of each and every restroom. Yes, a Minor League Baseball stadium with bathroom attendants. (Studer says he "wants people to drive here to use the restroom," and he's only half-joking.) The attendants are there to monitor the premises throughout the game, so that the area stays sparkling from start to finish.

And so it goes. This detail-oriented customer-service approach is built for the long haul, and a large part of the success that the team has experienced thus far.

"[Pensacola] has had a history of not finishing things, and we looked at [the Blue Wahoos] as our chance to change that," said Studer. "This community needed a win."