Fans quiz us about players' lives, game balls, IronPigs' Pridie
By
Baseball fans have a lot of questions about the Minor Leagues, the players and this website. We at MiLB.com attempt to answer some of those curiosities -- no promises, though.

Have a question? Shoot us an email at [email protected], grill us on Facebook or Tweet at us #AskMiLB

I am currently writing a book, a romance novel, where I would like for one of my characters to be a young, Double-A player, pursuing his dreams to play in the bigs. But I realize how little I know about the organization, so I decided to conduct some research. -- Jany G.

Sounds exciting. Answers are below: 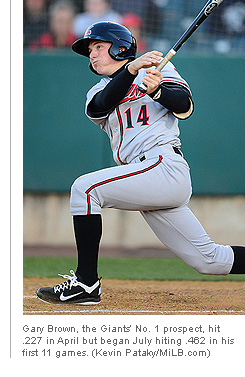 I was wondering what a player has to do to get recognition on your website? You should take a look at the Giants' No. 1 prospect Gary Brown and the comeback tear he is currently on after his slow start of the season. He's hit safely in 19 of last 20 games. You guys haven't posted one picture of any of his home runs or any pictures or write-ups at all. Is he blackballed for contesting an ejection fine? Anyhow, I just felt he has been overlooked. -- Troy B.

Is he blackballed? Gary Brown? The guy who we named as the best hitter at Class A Advanced last year? Futures Game selection and Cal League Rookie of the Year? There's no conspiracy -- when Gary (or any player in the Minors) does something especially newsworthy, we'll write up a story. We did one on him last week, in fact and had another story on him in April. You're right, he's heating up after a slow start.

How do I search for a player and his stats if I only know his name? -- Steve

A name is all you need! There is a search box across MiLB.com and all club sites at the top right of the page. If you begin entering the player's name, it will appear in the dropdown.

Hello! On behalf of my boyfriend, I have a couple questions. Do any of the Minor League teams have their own tryouts or training camps? He has played professional football and was released due to an injury a year ago and now wants to look into baseball. If so, how can we find out about them? -- Amber C.

Minor League teams do not hold open tryouts or training camps -- only Major League organizations hold tryouts. Minor League clubs simply serve as venues for players to develop within a system. If your boyfriend has no prior baseball experience, he may be at a disadvantage at a tryout competing with players who played baseball at the college level, but you can find the MLB tryout schedule here.

I can not see the regulations on pant length for Minor Leaguers. The question arises from an individual who states that Minor Leaguers must wear pants that are no longer than knee length with exposed socks. I do not see an explanation one way or another. A simple answer to me would be appreciated. -- Anthony S.

There is nothing in the Official Baseball Rules book regarding the length of uniform pants.

I subscribe to your site -- it is great. Is there a way when I log in and watch the games I can watch on my large home TV? For example, a cable, wireless device, etc? -- Tom F.

Sure, you'd just have to connect your computer to your TV with an HDMI or VGA cable.

The front page of the MiLB.com site lists the Class A leaderboard. Where do I find the leaderboard for all of Double-A or all of Triple-A? -- Michael S.

The leaderboard on the home page automatically and randomly changes to show a variety of levels each time you refresh the home page -- you just happened to see Class A. You can find batting and pitching leaders for every league on the league websites, or just click on "Stats" on the main menu and select your league, but we don't currently have full stats by level/classification. It's something we plan to add in the future, though.

My family and I are huge fans of Cheslor Cuthbert. I would like to receive information on how I can get an autographed baseball and photograph of him. He is a big sports celebrity in our hometown (Nicaragua). --Chris B.

You'd probably want to contact his team. They might be able to get you something and put it in the mail. Or you can send him a note to the ballpark.

Can food and beverages be brought into the stadium? -- "Alads"

Good question. Depends on "the stadium."

My husband and I are 99 percent certain we attended a Dayton Dragons game back in 2004 or 2005 where one of the players attempted to play all nine positions in the same game. When we were at a Dragons game just last night, no one on staff seemed to remember this ever happening. Did we imagine it? -- Bridget H.

It's entirely possible, but we don't have any record of it. With the staff turnover at Minor League clubs, it's not unusual that no one can recall it happening. If you have more details on the month you went, we could dig a little deeper.

I use your site to look up players stats quite often and have many of them bookmarked. Is there a place on the site that links directly to the bookmarks? -- Ben U.

Sure, mouse over the "stats" section of the top menu on MiLB.com, you'll see a large graphic that says "player bookmarks," along with a nearby text link.

If a player has been selected in the last round, what bonus can he expect? Once this player signs, can the organization send him to the Dominican Republic instead of the Rookie-level league of its system? This player was attending a U.S. junior college when drafted! -- "ddasilvarocha"

Major League Baseball only sets what they term slot values for the first 10 rounds of the Draft, so in terms of a bonus for a last-round pick, it's probably up to the organization and player's agent to negotiate a signing bonus. Dominican Summer League rosters usually consist of Dominican or Latin-American-born players, but technically it's possible. The only league stipulation is the roster may have no more than four players with more than four years of previous Minor League service.

How did the Phillies acquire Jason Pridie, now with Lehigh Valley IronPigs? Has he had a decent opportunity in the Majors? His stats seem adequate. -- Fred

The Phillies signed him to a Minor League contract on June 13 after he was granted his release by the Oakland A's on June 1 -- he was suspended for 50 games to start the season for violating baseball's substance abuse policy. He's spent parts of four seasons in the Majors, including this year.

Is there a method that will allow me to listen via Internet to the game broadcasts live? -- Ronald B.

How does a rookie request to be sent to another Minor League team? There is a player who has put up good numbers but appears to be lost in a money shuffle. Is there a secret to getting playing time, or is it a lost cause? There are no opportunities unless a player gets time at one position and at the plate. -- "DJ"

Playing time and roster assignments are most likely at the discretion of the Major League organization and its Minor League/player development director. The player in question could probably speak with his manager to clarify what short and long-term plans the organization might have for him, but those decisions are largely up to scouting directors and the folks who oversee Minor League operations and player development. A rookie requesting a promotion with little experience probably wouldn't go over that well.

I recently attended a game in Salt Lake City and was lucky to snag a foul ball -- made in China. Really? Why did the PCL outsource the production of baseballs to China? Come on guys, charge another $.25 per ticket and bring those jobs back to the USA. -- Nile E.

The PCL did not outsource anything -- all baseballs used in the Minors (not just the PCL) are assembled by Rawlings in China, whereas Major League Baseball's balls are made at a Rawlings factory in Costa Rica.

From a Minor League player standpoint, what does the term "organizational player" mean? -- Bob B.

Someone who provides organizational depth, a good teammate who does some things well but may not have the skills to be a Major League star.

Why is it that there is no category for post-All-Star game stats in Brandon Nimmo's stats for the Brooklyn Cyclones? -- Scott V.

The New York-Penn League All-Star Game is not until mid-August. And it's still July.

I believe my city is a viable option for a team interested in relocating. What would be the best way to approach this subject with teams that are nearing the final years of their contract with old existing stadiums? If a team is interested, I believe we can build a stadium to suit the team's needs. -- John M.

Judging by the area code in your email, you are located in Broward County, Fla. Broward County falls under the territory of the Miami Marlins, who would have to waive their territorial rights to allow a Minor League Baseball club to relocate there. So, it's not quite a simple answer.

Ryan Garko of the Montgomery Biscuits is batting .308 in 52 games with 201 at-bats. Why is he not listed in the Southern League Batting Leaders? -- Joe E.

A player must have at least 2.7 plate appearances per game that his club has played to appear among the league leaders. The Biscuits have played 94 games so far, meaning a Montgomery player would need at least 254 plate appearances to qualify. At the time of your email, Garko had only 236 plate appearances (201 at bats, 26 walks, two sacrifice flies and seven hit by pitches).