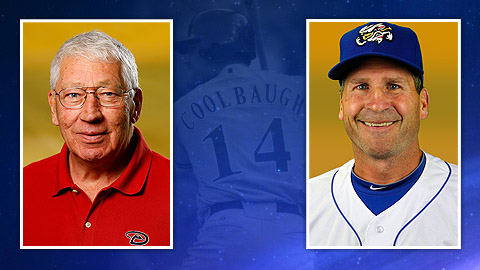 ST. PETERSBURG, Fla. -- Minor League Baseball announced today the selections of Arizona Diamondbacks vice president and special assistant to the general manager, Bob Gebhard, and Omaha Storm Chasers manager Mike Jirschele, as the recipients of the fourth annual Sheldon "Chief" Bender and Mike Coolbaugh Awards, respectively. Gebhard and Jirschele will be honored on Dec. 8 at the annual banquet during the Baseball Winter Meetings™ at the Hilton Anatole in Dallas, Texas.

The Sheldon "Chief" Bender Award is presented to someone with distinguished service who has been instrumental in player development. Bender spent 64 years in baseball as a player, manager and executive. He oversaw the Cincinnati Reds farm system for 22 years and spent a total 39 years with the club.

Gebhard began teaching players while he was still on the diamond as a pitcher, in 1974 in the Montreal organization. He served as a player/coach for their Triple-A® affiliate in Memphis for two seasons. Gebhard then held the positions of Minor League field director, and director of Minor League operations with the Expos over the next dozen years.

In 1987, he joined the Minnesota Twins organization as director of major league personnel. Gebhard worked with Jim Rantz, who was his manager in Gebhard's first year in the Minors in 1965 with the independent St. Cloud Rox. Rantz was presented with the inaugural Coolbaugh Award in 2008.

Minnesota promoted Gebhard to vice president of player personnel in 1988. He remained with the Twins through the 1991 season, when the club won its second World Series title in five years.

Gebhard then went to work for the expansion Colorado Rockies. As the first general manager of the club, he built their entire baseball operations department from the ground up. In 1995, the Rockies won the National League's first Wild Card berth.

From 2000-04, Bob worked in the St. Louis organization, helping with the Cardinals' day-to-day operations, including contract negotiations and player evaluation.

For the last seven seasons, Gebhard has been in his current role of vice president and special assistant to the general manager with the Arizona Diamondbacks. He has relied upon his decades of experience in providing his input on various aspects of the club's operations.

"Bob Gebhard has been developing, scouting, evaluating and signing players for more than 35 years during his distinguished front office career," Minor League Baseball president, Pat O'Conner, said. "His tremendous dedication, knowledge and experience have contributed to the success of several organizations, resulting in 10 playoff appearances and two World Series championships."

"I am very honored to be selected for the Chief Bender Award, because I had known Chief for years and he represented so many wonderful things in our game," Gebhard stated.

Other recipients of the Bender Award include Keith Lieppman (2009) and Mark Newman (2010).

The Mike Coolbaugh Award is presented to an individual who has shown an outstanding baseball work ethic, knowledge of the game and skill in mentoring young players on the field. Coolbaugh played in nearly 1,700 games in his Minor League Baseball career from 1990-2006. He also appeared in 44 Major League games. Coolbaugh was only 35 years old when he died after being hit in the neck by a line drive while coaching first base for Tulsa in a game at Arkansas on July 22, 2007.

Jirschele led the Omaha Storm Chasers to the Pacific Coast League championship in his ninth consecutive year of managing the Kansas City Royals' top affiliate this season. Along the way, he also won his 1,000th game as a Minor League manager.

After playing 13 seasons in the Minors, Jirschele began his managerial career in 1992 in the Gulf Coast League. He was named Manager of the Year in the GCL for leading Kansas City's Rookie-level club to a 41-18 record and the league championship.

The following year, he piloted the Rockford Royals to a division championship in the Midwest League. In 1994, he again captured Manager of the Year honors when he led the Wilmington Blue Rocks to a 94-44 mark and the Carolina League title. Jirschele was also named The Sporting News Minor League Manager of the Year in 1994.

He first managed Omaha in 1995, when the club was a member of the American Association. Omaha made the playoffs in two of the three seasons Jirschele skippered the team.

In 1998, he was named infield instructor for Kansas City's Minor League system. From 1999-2002, Jirschele served as the Royals' coordinator of instruction. He began his second managerial stint with Omaha in 2003 and was Coolbaugh's manager in 2006.

"Mike Jirschele is a man of integrity who stresses the importance of respecting and playing the game of baseball the right way," O'Conner stated. "Winning his 1,000th game as a manager and the Pacific Coast League championship this year are just the latest examples of his dedication to developing successful players for the Kansas City Royals, something Mike has done for two decades."

"I'm very honored to receive this award," Jirschele said. "I just go out, do my job, do what I'm supposed to do, and try to make players better for the organization. My role is to get them to the big leagues, and build a rapport with the players so they feel like they can come in and talk to me at any time. To get an award for doing what you feel is your job is very gratifying."