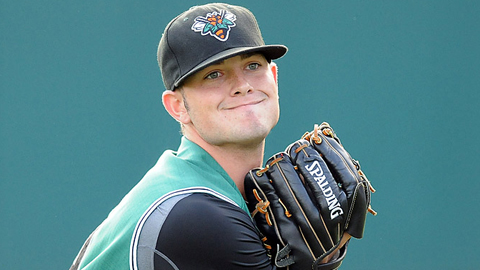 San Jose's battery is fully charged, even when Hector Sanchez isn't behind the plate.

Chris Heston allowed three hits over eight innings Saturday and Sanchez extended his RBI streak to 15 games by driving in the go-ahead run in the Giants' 1-0 blanking of the Stockton Ports.

A third highlight-producer, Heath Hembree, struck out the side in the ninth to lower his ERA to 0.56 in 17 appearances and record his California League-leading 13th save.

"You always to go out there and finish, but I have so much trust and faith in Heath," Heston said. "Every time he comes in, he shuts the door."

Heston (5-1) hasn't allowed a run over 15 innings in his last two starts and leads the Class A Advanced circuit with a 2.32 ERA. He also grabbed a share of the top spot in wins, but the victory was in doubt much of the night, thanks to his counterpart.

Stockton's A.J. Griffin kept pace with Heston pitch for pitch through seven innings in his Cal League debut. The 23-year-old right-hander, who was 4-0 in eight starts for Class A Burlington, allowed only three batters to reach safely and matched his career best with 10 strikeouts.

"When a guy is going out there and matching, it's a battle between us," Heston said. "With him throwing so well, you definitely feel the level of competition. That helped me out, definitely."

Sanchez, whose seventh-inning double was one of the Giants' two hits off Griffin, laced another double in the top of the ninth off reliever Josh Lansford (1-2) to plate Ryan Cavan.

Reaction in the dugout?

"That was huge," Heston said. "I don't think I have been that fired up in a long time."

Sanchez, a 21-year-old catcher who was serving as San Jose's designated hitter, is batting .348 with 10 extra-base hits and 25 RBIs during his remarkable streak.

"He's tearing it up and he's got the ability to do stuff like that," Heston said. "He's seeing it well right now."

In addition to the late run, Heston received plenty of defensive help. He allowed a single around the mound and issued two walks to load the bases in the fourth, but his middle-infield duo turned an inning-ending double play -- one of 11 ground-ball outs.

"I was just trying to throw low, quality strikes and pitch to contact," Heston said. "Those guys are just playing amazing defense behind me. They bailed me out a few times tonight."

Heston, the Giants' 12th-round pick in 2009, walked three, hit a batter and struck out four. He held the Ports hitless in three chances with runners in scoring position.

Going deep into the game is old hat for the Florida native. He lasted eight innings four times for Class A Augusta last season. His best previous outing was last August, when he limited Savannah to two hits over 7 1/3 scoreless frames.

"I'm excited with how I have started the season, but it's still early," he said. "I have lot of work to do and, hopefully, I can just keep it going."