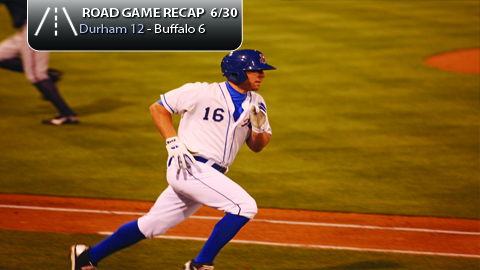 Buffalo, NY --- Chris Gimenez clobbered a three-run homer to culminate a nine-run fifth inning to lead the Durham Bulls to a 12-6 victory over the Buffalo Bisons at Coca Cola Field on Saturday night.

The Bulls (39-45), who remained unbeaten against the Bisons (41-42)in five games, sent 14 hitters to the plate in the frame against Mark Cohoon (L, 0-1) and Jack Egbert. Durham knocked out seven of its 16 hits in the game, and chased Cohoon after 4 1/3 innings. The Bulls KO'd Cohoon in the fourth inning on Monday at the DBAP.

Durham took a 2-0 lead in the first inning on singles by Stephen Vogt and Henry Wrigley. Tim Beckham bunted his way on with one out before Jesus Feliciano was hit. One out later, Vogt singled to right, followed by Wrigley's hit to center.

Meanwhile, Alex Torres (W, 3-3) worked through five innings to earn the win. Torres, who was scheduled to throw 75 pitches, threw 92 to record his third win.

Feliciano, who went 3-5 with three RBI, delivered a run-scoring single in the second to boost Durham's lead to 3-0.

The Bulls led 12-0 before the Bisons scored one in the fifth against Torres in his last inning. Josh Lueke allowed two in the sixth, with Jhonny Nunez allowing three in the eighth.

Matt Torra starts for the Bulls on Sunday afternoon at 1:05 PM ET in the second game of the four game series.