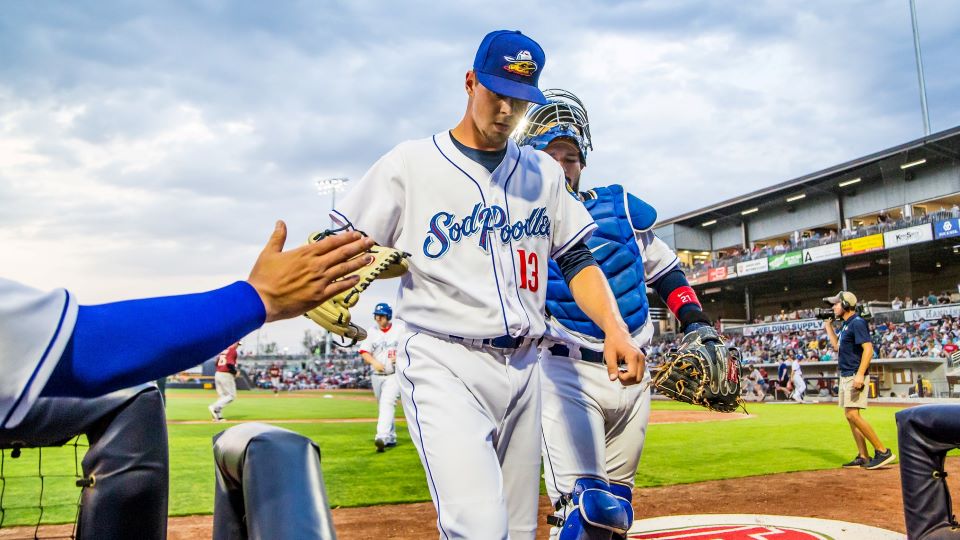 It's been a long decade for the Padres, who haven't compiled a winning season since 2010. But despite another lackluster season at the Major League level, plenty of reason for optimism remains on San Diego's farm. The Padres continue to boast one of baseball's best Minor League systems, headlined by MacKenzie Gore, Taylor Trammell and Luis Patiño, all of whom rank in the top third of MLB.com's Top 100 Prospects list. Three affiliates (Class A Short-Season Tri-City, Class A Advanced Lake Elsinore and Double-A Amarillo) advanced to the playoffs, with the Sod Poodles taking home the Texas League championship in their inaugural season.

With the 2019 big league arrivals of Fernando Tatis Jr. and Chris Paddack, the Padres laid a foundation for long-term contention. Come 2020, they'll be under the helm of a new manager in Jayce Tingler and likely will look for a lot of help from the farm. Fortunately, every level is stocked with talent, signifying that San Diego's waves of "Hot Talent Lava" will keep flowing.

Catcher -- Luis Campusano, Lake Elsinore (110 games): Given the depth of the organization, Campusano is often overlooked. His 2019 campaign, however, began to turn that around. In his second full season, he jumped from No. 24 among Padres prospects to No. 6 and cracked the overall Top 100 at No. 86. The 5-foot-10 backstop led the California League with a .325 batting average and ranked second in doubles (31), RBIs (81), and OPS (.906). He racked up a midseason All Star berth and was named Cal League co-MVP. Campusano also made strides defensively, logging 675 1/3 innings behind the plate while guiding Lake Elsinore's pitching staff to a circuit-best 3.34 ERA.

Campusano played in 40 more games than he did with Class A Fort Wayne in 2018, and his OPS jumped nearly 200 points. His increase in power is most noteworthy -- after totaling three home runs last season, the 21-year-old swatted 15 this year.

"He's always been able to hit. He puts the ball in play -- he doesn't punch out, which is very desirable in today's game," Padres senior director of player development Sam Geaney said. "But the vibe I got from being around the California League this year was that he was the most feared hitter in the league."

First baseman -- Aderlin Rodriguez, El Paso (75 games): Although he spent the first two months of the season on the injured list, the 28-year-old rebounded nicely with the best offensive numbers of his career. A Minor League journeyman, Rodriguez posted his finest season since 2010, with a .321/.363/.634 slash line. The 28-year-old collected 64 RBIs and belted 19 long balls, just missing his fourth consecutive 20-homer season.

Second baseman -- Xavier Edwards, Fort Wayne (77 games), Lake Elsinore (46 games): The 20-year-old shined on all fronts, earning both a Midwest League All-Star selection and a promotion to the California League after recording a .336 average and .805 OPS for Fort Wayne. Across both levels, the Padres' fifth-ranked prospect (No. 72 overall) posted a combined on-base percentage of .375 and a strikeout rate of 9.6 percent while leading the system with 162 hits in 123 games.

"We've challenged Edwards to pretty aggressive levels in his first full year of professional baseball," Geaney said. "He's always going to give you a very good at-bat. I think he's one of the hardest guys to strike out in the organization, if not the Minor Leagues. ... This is an offensive approach and player that could move pretty quickly."

Defensively, Edwards stands out as a versatile middle infielder who sees time at both second base and shortstop. He committed eight errors in 355 total chances at second for a .977 fielding percentage, up from the .959 mark he posted predominantly at shortstop in 2018.

"He's incredibly reliable as a defensive player -- we trust him," Geaney said. "I know when you get to the higher levels and eventually the big leagues, that's very important."

Shortstop -- CJ Abrams, AZL Padres (32 games), Fort Wayne (2 games): It didn't take long for the first-round Draft pick to get acquainted to pro ball. Over his first 32 games, the 19-year-old batted .401 with a 1.104 OPS and 14 stolen bases in the Arizona League. Listed as baseball's sixth-best shortstop prospect and San Diego's No. 4 prospect, Abrams tallied three big flies, eight triples and 13 doubles while plating 22 runs between the complex circuit and the Midwest League.

Third baseman -- Ty France El Paso (76 games), San Diego (69 games): France made mincemeat out of the Pacific Coast League, posting a whopping .399/.477/.770 slash line for the Chihuahuas and shining at the Triple-A All-Star Game and Home Run Derby in El Paso in July. Had he played in enough Minor League games to qualify, his average and 1.247 OPS would top the organization. The limited plate appearances didn't prevent him from finishing second in the system in both homers (27) and RBIs (89) or from earning PCL MVP honors. After making his Major League debut in April, the San Diego State product split time between the bigs and Triple-A until he found consistent playing time in San Diego in mid-August.

Primarily a third baseman, the 25-year-old saw time at second base and first this year.

"We're looking for guys that we can get consistent quality at-bats, guys that can hit or get on base with walks or by a hit-by-pitch," Geaney said. "Ty consistently put together very high-quality at-bats around the Minor Leagues and even in his time in the Majors. The quality and underlying factors that we value has always been very strong. He's going to continue to elicit a lot of conversation for us going forward."

Michael Gettys, El Paso (128 games): No Padres Minor Leaguer hit more home runs than Gettys, whose 31 dingers for the Chihuahuas nearly doubled his previous career high of 17. The 24-year-old also led the system with a career-best 91 RBIs while setting another personal best with 29 doubles. In his first year in the PCL, the Georgia, native posted an .822 OPS, yet another career high.

Edward Olivares, Amarillo (127 games): The Padres' No. 17 prospect has been consistently stellar since debuting in the Blue Jays organization in 2014, and San Diego saw overall improvement in the 23-year-old this season.

"The most exciting thing for us was that everything he did this year got better," Geaney said. "His approach at the plate got better; he walks more. Defensively, an area where he needed to get better, he got better. ... You never know when these types of things are going to click with a player, but to see it happen over the course of a season was quite fun with Edward."

Olivares had a .283/.349/.453 slash line, hitting for his highest average since his rookie season in the Dominican Summer League in 2014. He also led the system and set a career high with 35 stolen bases. With 18 homers, he tied for third in the Texas League; he led the loops with 85 runs scored and placed second with 77 RBIs.

Taylor Kohlwey, Lake Elsinore (19 games), Amarillo (65 games), El Paso (11 games): After scorching his way through the Cal League in April, Kohlwey put up a .382 OBP through 65 Texas League games to earn his first crack at Triple-A ball. The 25-year-old compiled a combined .302/.396/.424 slash line, eclipsing his highest average by more than 40 points. In 95 games, Kohlwey collected 22 extra-base hits and worked a career-best 39 walks.

"In the beginning of the year, I think he faced a little bit of adversity," Geaney said. "We wanted to see a little bit of a more balanced attack from him, where he could get hitters out from both sides of the plate. For him to do that, he needed to round out his arsenal a little better.

"The biggest thing we saw this year was the development of his changeup into a real plus weapon. I think the results reflected that."

Left-handed pitcher -- MacKenzie Gore, Lake Elsinore (15 starts), Amarillo (five starts): Widely regarded as the future ace of the Padres rotation, Gore dominated all year while earning a promotion and a selection to the Futures Game. Across the California and Texas leagues, San Diego's top prospect posted a 9-2 record with a 1.69 ERA and 0.83 WHIP. The 20-year-old whiffed 135 batters -- the third-most in the system -- and held opponents to a .164 average while issuing 28 walks. Ranked as MLB.com's No. 4 overall prospects (tops among left-handed pitchers), Gore was shut down in August after surpassing 100 innings.

"I think the challenge is to see the best version of himself more consistently," Geaney said. "The bar for 2020 is to see how frequently he can feature his elite stuff, and I think he'll continue to up the ante as far as what he's capable of.

"Everything we've put in front of this young man, he's answered. I don't think it's unreasonable to expect him to put himself in the [rotation] conversation at some point next year."