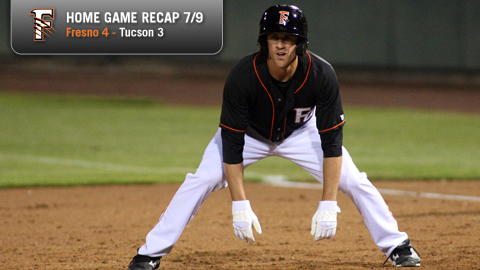 FRESNO- Many records in baseball are set rather uneventfully, and have little or no impact on the outcome of the game at hand. That was not the case Saturday night in Downtown Fresno, where Tyler Graham swiped second and third base to set the Grizzlies' single-season stolen base mark, then scored the game-winning run on a sacrifice fly by Justin Christian to give the Grizzlies a thrilling, 4-3 win.

Graham reached base on a leadoff single after battling back from an 0-2 count. With pinch-hitter Ryan Lormand batting, Graham stole second to match Calvin Murray on the franchise list with his 42nd theft of the year. He then swiped third to set the new record, overtaking the previous high set in 1999. Lormand would strike out, but Christian lifted a ball deep enough to Cedric Hunter in center for Graham to beat the throw home on a belly-first slide, giving Fresno its third walk-off win in its last six games on this homestand.

Tucson (45-44) scored first, dropping in three softly-hit singles in the top of the second. The Padres did the same in the second inning, stringing together three consecutive two-out singles to score again and take a 2-0 lead.

Fresno (38-52) got the second run back in the bottom of the frame, thanks to some help from the Tucson defense, including Friday night's hero, Aaron Cunningham. After Christian opened the inning by reaching on an error on the third baseman Steve Tolleson, he stole second and was still there with one out as Edgar Gonzalez stepped up. The shortstop hit one to medium-deep right field that Cunningham ranged back on and positioned himself underneath on the back-peddle, but the ball clanked out of Cunningham's mitt, allowing Christian to score and Gonzalez to pull into second base.

The first seven Tucson hits were all singles until Hunter pulled a ball inside the bag at first for a double in the top of the fourth, motoring around to third as Christian could not come up with it cleanly in the Fresno bullpen. But Fresno All-Star starting pitcher Andrew Kown worked out of trouble again, getting two groundouts and a strikeout to escape unscathed.

The Grizzlies continued to trail 2-1 into the bottom of the sixth, when Brandon Belt led off by taking Tucson starter Jon Leceister the opposite way into the bleachers in left for a solo shot to tie the game. Fresno wasn't done there, though, as Brett Pill followed with a single, moved to third one out later on a single by Hector Sanchez and scored on Tyler Graham's force out on a chopper over the mound to put the Grizzlies in front, 3-2.

The lead was short-lived, though, as Waldis Joaquin surrendered a ringing solo blast to Matt Clark, the second batter he faced in the top of the seventh. Joaquin settled down from there, though, and Dan Otero (2-1) tossed a pair of scoreless innings to earn his second win in six days.

Fresno will look to salvage a split of the four-game set Sunday evening at 6:05pm as the Grizzlies send righty Felix Romero (0-3) against Tucson lefty Pedro Hernandez (2-0).