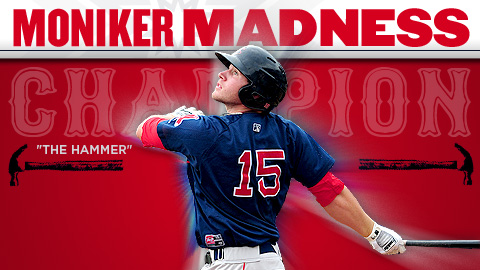 If Seth Schwindenhammer reaches the Show, he'll have the longest surname in big league history.

Lowell Spinners outfielder Seth Schwindenhammer has a long road ahead of him to get to the Majors, but he's already made a name for himself with, well, his name.

The man who could become the Major Leaguer with the longest-ever surname should he make it there has become the fifth winner of MiLB.com's Moniker Madness contest, an annual tournament to determine the best name in the Minor Leagues. Schwindenhammer, a No. 1 seed, took out White Sox farmhand Dusty Harvard in a tight vote. Schwindenhammer won with 51.2 percent of the vote to Harvard's 48.8 after the Bristol outfielder saw his late rally come up just short.

For Schwindenhammer, the victory ends a year of waiting and wondering. Entering the 2010 contest as a No. 15 seed, Schwindenhammer became the tournament's Cinderella story, advancing all the way to the final round before succumbing to Northwest Arkansas' Rowdy Hardy.

This year, Schwindenhammer was not an underdog, and he romped through the tournament with hardly a scare, dispatching his toughest challenger prior to the finals, Spokane shortstop and Farmer Works Bracket No. 1 seed Rougned Odor, in the semis by 11 percentage points.

Schwindenhammer enters the Moniker Madness record books next to previous winners Houston Summers (2007), Will Startup (2008), Dusty Napoleon (2009) and Hardy. The New York-Penn League All-Star benefited from strong support by the Lowell Spinners' front office, which produced a pair of videos and made sure that fans and local media were getting out the word that The Hammer needed their votes.

Vote they did, sending Schwindenhammer through the Icicle Reader Bracket with little trouble at all. He was the leading vote-getter in each of the first four rounds of the competition, including a Round of 16 defeat over No. 5 Bob Stumpo and a quarterfinal victory over No. 2 Bret Butts.

"The [Spinners] front office updates me about what has been going on and who I'm up against, but I don't get too involved," Schwindenhammer said during voting for the final. "I've been keeping a fair head about it."

For his part, runner-up Harvard used the powerful social media vehicle Twitter to help his campaign.

In previewing the final, he tweeted, "It's been a long road to the finals. But with great preparation and hour-by-hour voting from certain people, I think I can win."

"If you are in class bored throw a couple votes Harvard's way," he wrote with just hours to go in the voting. Those votes nearly got Harvard the come-from-behind victory after trailing by about 10 percent with 24 hours to go.

Nonetheless, it was a terrific debut performance by Harvard, who raced through the Razor Shines Bracket as a No. 2 seed, taking down No. 3 Xander Bogaerts in the Round of 16, No. 4 Forrest Snow in the quarterfinals and Natty Natress Bracket winner and No. 1 seed Beamer Weems in the semis.

Brendon Desrochers is an editor for MLB.com. This story was not subject to the approval of the National Association of Professional Baseball Leagues or its clubs.